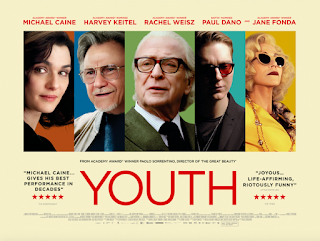 Well this is something different. Youth is a hard to categorise film from Paolo Sorrentino. Sorrentino often seems the definition of (admittedly beautifully filmed) style over substance. But he’s also able to suggest great, unseen depth, a hard to define quality. Sometimes these qualities result in an impressive but frustratingly empty work. And sometimes it results in something simply wonderful. Youth falls firmly into the second category. In fact, it fits so firmly into this that I think it might be the most wonderful film Sorrentino has made. Put frankly, I loved this film. I can’t quite put my finger on why somehow, but I loved it.

It’s set in a Swiss retreat, peopled by the rich and famous. There are film stars, Miss Universe, famous pop stars and an overweight former Argentinian footballer (who could be anyone right?). Fred Ballinger (Michael Caine) is a world-famous composer, a man officially in retirement, uninterested in answering entreaties from the Royal Family to perform his famous “Simple Song #3” at Prince Philip’s birthday. He is accompanied by his daughter Lena (Rachel Weisz), who acts as his assistant, and struggles with her father’s difficult personality and her resentment towards him. Fred’s best friend Mick Boyle (Harvey Keitel), a famous director, is also staying at the resort with a gang of screenwriters, preparing his script for what he intends to be his final film (his “testament”).

Youth is a film that conveys great depth and emotional strength, while never falling into any category or offering up clear answers or spoon-fed themes. Instead it explores, in a gentle way, age, disappointment, hope, lost opportunities and warm memories. It’s nominally a film about old people reflecting on their youth, but it’s also full of moments that show these characters still have moments of vibrancy. In a beautiful moment, the footballer (barely able to get himself out of a pool without oxygen) carries out a series of beautifully skilful keepie-uppies with a tennis ball for over a minute, before he wheezes and has to stop. That’s kinda the whole film right there in an image: age and youth all in one go. It’s beautiful. I loved it.

Sorrentino loves the flashy shot, and carefully framed image. This film is full of them, and they work wonderfully well. It’s sprinkled throughout with gorgeous dream sequences and fantasy moments, from Boyle seeing a field full of his leading ladies past, to Lena dreaming of a hilariously overblown music video showing her unfaithful husband (a slimy Ed Stoppard) and Paloma Faith (a very good sport) undulating over a speeding car. We see Fred sitting in a field conducting a semi-imaginary orchestra of cows with bells. Imaginative shots are sprinkled throughout, everyday things seen from new and unique angles. 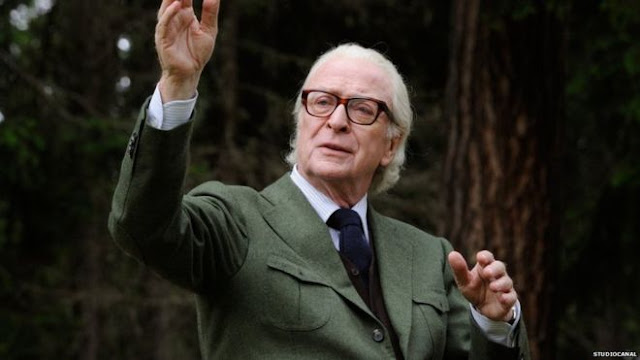 And its so emotionally fulfilling, filled with both lump-in-the-throat moments and moments of searing, magical hope and joy. It explores what matters to us as we get old – and how what matters to us in our lives changes as we age. Sometimes these things remain the same, sometimes we move with the times. Sometimes we adjust, and sometimes we don’t. It’s a film where some characters struggle to recall events, others reinterpret their lives as they happen. You could criticise the film for not having a clear central theme, but its theme if anything is life – and life is not easy to categorise. It’s a mountain of different moments and attitudes: and that is what this film likes. It’s messy and hard to predict. And it’s strangely beautiful.

So Sorrentino crafts a feast of a film here, crammed full of dialogue that should be almost too weighty and overtly “important”, but somehow never comes across like that. It’s partly because it’s delivered with such experienced, lightly worn skill, but also because Sorrentino pulls off the trick of positioning it as profound rather than overbearing. Shot with a gentle, elegiac expressiveness, it’s a film that brilliantly works, that conveys and carries great weight. It’s about the human condition, and it feels real and human at all times.

It also helps that it’s superbly acted. There isn’t a dud performance here – and some give some of the most beautiful work of their career. Michael Caine takes a few minutes to accept as a world famous composer (something about him just doesn’t quite work), but you quickly let it go because he is astonishingly good here. Caine’s Fred carries great reserves of regret and loss, but also many memories of joy. Caine is beautifully expressive – part observer, part driver of the action. He has the wonderful air of being young-old and an old-young-at-heart. He’s playful but also tired. He’s strangely unknowable but at times open. It’s a beautiful performance.

Just as good is Harvey Keitel. The film is full of these two guys – like Stadler and Waldorf – moaning about getting old. But Keitel brings a great tragic depth to Boyle, a great director fallen on hard times, a man whose best days may well be behind him but who refuses to let the light die. He’s both funny and (by the end) incredibly moving. Rachel Weisz is radiant as Lena – a scene where she finally lets years of anger out is wonderful – but another late scene as she quietly weeps with a sort of sad joy is simply superb. She has a gentle romance that builds with real sweetness. She’s impossible to look away from in this, she’s brilliant. 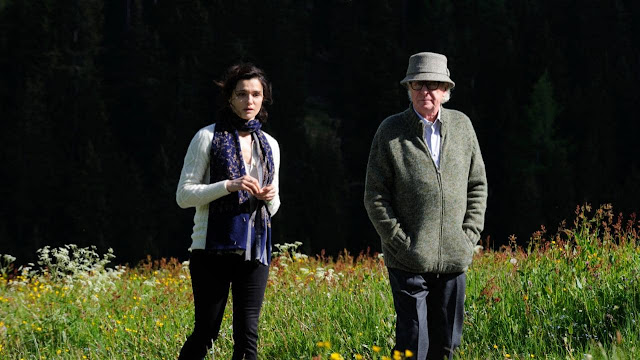 Youth also has moments where it explores the nature of art and its legacy. Ballinger feels he is probably a good-but-not-great composer. Boyle feels there are moments he touched greatness, but is never sure if it’s there or not. Paul Dano plays a great stage actor who is known worldwide for his role as a robot in a Star Wars style smash. What is art? The film doesn’t dare to answer the question, but it does ask what are artists? How do they question themselves? Why do they do what they do? Artists in this film are always watching – even the footballer – they are always looking to become a part of their world or comment on it.

Sorrentino’s film is marvellous. I really loved it. It’s crammed full of brilliant moments. Even Jane Fonda’s overblown cameo as a film star works (I think just). It’s played with such brilliancy, structured with such light playfulness, that it is able to carry great depth and grace. It’s a film that rewards reviewing – I’m not sure I’ve worked out the implications of the final shot, or what it might mean for how we should interpret Ballinger’s final actions – and I can’t wait to see it again.
Email ThisBlogThis!Share to TwitterShare to FacebookShare to Pinterest
Labels: 2015, Harvey Keitel, Hollywood satire, Jane Fonda, Michael Caine, Paolo Sorrentino, Paul Dano, Rachel Weisz