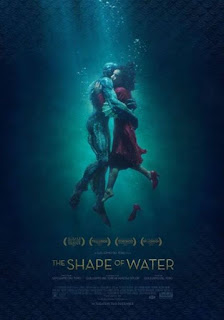 Guillermo del Toro: part arthouse director, part thumping action director, who else could have made both Pan’s Labyrinth and Pacific Rim? The Shape of Water falls firmly into the former category, and continues the director’s long-standing interest in fairy-tales and fables, creating adult bedtime stories filled with romance and wonder, but laced with violence and human horror (and it’s always the humans who are the monsters). The Shape of Water has been garlanded with huge praise – but yet I’m not quite sure about it. Just not quite sure.

In 1962 in Baltimore, Elisa Esposito (Sally Hawkins) is a mute cleaner working in a government facility with her colleague, friend and effective translator Zelda (Octavia Spencer). Her only other friend is her neighbour, a gay out-of-work advert artist Giles (Richard Jenkins). The research facility takes delivery of a strange amphibious creature (Doug Jones), captured in the wild by sinister CIA man Richard Strickland (Michael Shannon). While Strickland and lead scientist Dr Hoffstetler (Michael Stuhlbarg) conduct tests on the creature, Elisa befriends it – the two of them drawn together by their isolation and inability to communicate verbally. When the decision comes from above to dissect the creature, Elisa decides to help it escape.

The Shape of Water is an adult fairy-tale that uses the structure, rules and heightened reality of the bedtime story. So we have Elisa as “the Princess without a voice”, the government facility as the evil castle, the creature as a mixture of damsel in distress and knight errant, and Michael Shannon’s vile government spook as a sort of perverted evil Queen. While the film is set in 1962, it’s aiming for a fantasy world feeling: Elisa and Giles even live above an old-school movie cinema, while the facility itself is a dank, subterranean concrete prison, part medieval dungeon, part industrial complex, dressed in a retro-1950s style. There’s no denying the film looks fantastically impressive.

The plot hinges on the growing bond between Elisa and the creature, which flourishes first into a mutual friendship, then semi-romance and finally into a full-blown relationship. If there is one part of the movie which I felt didn’t quite work, it was the build between friendship and love. While del Toro does some excellent work showing these two bonding over a common lack of language – she teaches him some basic sign language, they both share a love of music – I felt the jump between friendship and sexual attraction seemed a little big.

Del Toro films it all beautifully – and his empathy for both characters is very moving. But the film wants us to feel this deep connection for (and between) the two characters – and I’m just not sure I did. I’m not sure the film gives the time it needs for this development. Great as Michael Stuhlbarg’s (and excellent as his conflicted performance is) character is, could the film have removed his sub-plot and invested more time in the relationship? Yes it could – and I think this could have made a stronger movie. This is of course a personal reaction – I’m sure plenty of people will be bowled over by the romance of the film – but I didn’t quite buy it. For all the soulfulness of the film, I just didn’t find myself investing in this relationship as it built as much as I should. 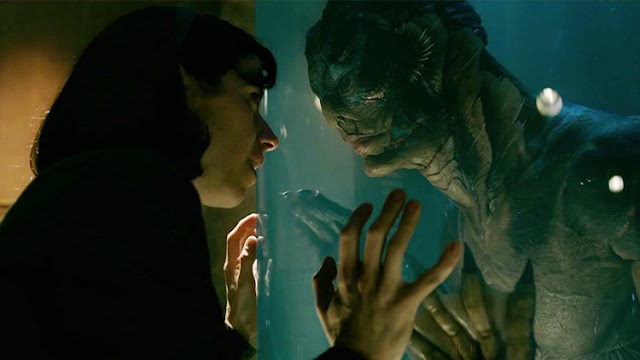 This is despite Sally Hawkins’ expressive acting as Elisa. I find Hawkins a bit of an acquired taste: she is a little too twee, something about her eyes and vulnerable smile is a little too head-girlish. Of course that sprightly gentleness works perfectly here, but the character is more interesting when del Toro explores her depths, her desire and well-concealed resentfulness under a cheery exterior (practically the first thing we see her do is masturbate in the bath – a daily ritual timed to the second via egg timer, functionally getting these feelings out of the way before the day ahead). Hawkins mixes this gentle exterior and passionate interior extremely well throughout the film.

The principal supports are also excellent. It’s no coincidence that del Toro makes our heroes all outsiders: a mute, a black servant and an ageing gay man. As well as showing why these characters might be drawn together, it’s also a neat parallel commentary on attitudes of the time – Octavia Spencer in particular makes a huge amount out of a character that is effectively a voice for Elisa half the time, investing the part with a huge sisterly warmth.

Richard Jenkins is both very funny and rather sweet as a man scared of being alone and frightened about doing the right thing. Most of the film’s laughs come from him – but so does a large degree of its heart. Jenkins gets some fantastic material – from hints that he has been fired for social and sexual misdemeanors from his Mad Men-ish former job, to his growing realisation that his hand-drawn art is being left behind in a world embracing photography (“I think it’s my best work” has never sounded like a sadder mantra), and above all his hopelessly sad infatuation with the friendly barman at a local diner (the sort of hopeless crush you feel he must realise isn’t going to go anywhere good – but still manages to be endearing before it gets there).

Del Toro’s dreamy fable has plenty of potential monsters and obstacles in it – from government suits to Russian heavies – but the main antagonist is Shannon’s Strickland. Great as Shannon is in this role as a menacing heavy with a hinterland of insecurities and self-doubt, it’s a character that feels a little obvious. He’s the monster, you see! It’s a heavy-handedness the film sometimes uses – not least in its occasional references to the race politics of the era – that weights the deck, and tries to do a little too much of the work for the audience. Again, a film with one fewer sub-plot might have allowed this character greater depth. As it is, his vileness is established from the first second, which means the metaphor of his hand with its increasingly rotten, gangrenous fingers seems a little to on-the-nose. 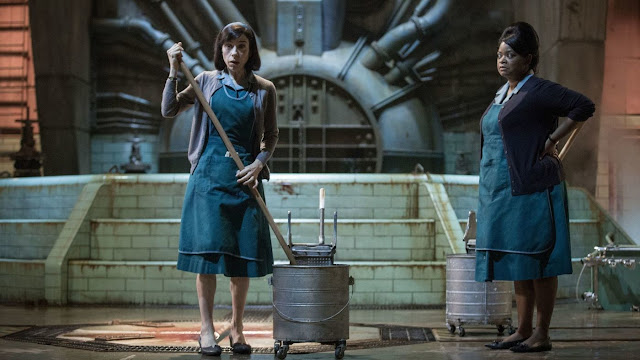 But The Shape of Water is a labour of love, and a testament to love – and del Toro reminds us all what a luscious and romantic filmmaker he can be. The later romantic moments between Elisa and the Creature have a beauty to them – not least the moments when they immerse themselves together in water. Other moments are too obvious: an imagined song-and-dance routine is so signposted in advance that it carries little emotional impact. In fact, the film’s main fault may be it is too predictable: most of its plot developments I worked out within the first few minutes – but it sort of still works. After all, fairy-tales are predictable aren’t they?

Del Toro has made one from the heart here. It’s not a perfect film – it’s not a masterpiece, and I think it’s a less complex and affecting work than the brilliant Pan’s Labyrinth – but it’s made with a lot of love and a lot of lyrical romanticism. It looks absolutely astounding. It’s actually surprisingly funny and wonderfully acted: Richard Jenkins probably stands out, and my respect for Octavia Spencer continues to grow. Del Toro is gifted filmmaker, and he is working overtime here to make a romantic, sweeping, monster movie cum adult fairy-tale. All the ingredients are there: but somehow I didn’t fall in love. Did I miss it? Maybe I did. And I can’t think of much higher praise than I’m more than willing to go back and look again and see if I get more of a bond with it next time. But, for all its moments of genius, I found the delight was on the margins rather than the centre.
Email ThisBlogThis!Share to TwitterShare to FacebookShare to Pinterest
Labels: 2017, Doug Jones, Guillermo del Toro, Michael Shannon, Michael Stuhlberg, Octavia Spencer, Richard Jenkins, Romance films, Sally Hawkins, Science fiction