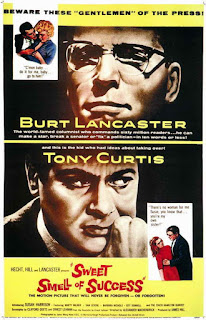 Is there a more cynical film in all the world than Sweet Smell of Success? Is it any wonder that the preview audiences, settling down to watch what they expected to be a Tony Curtis light comedy, went crazy? But Sweet Smell of Success is a film that captures the sweaty desperation of show-business, and the cut-throat ambitions of Manhattan. It’s a brutal, sharp, vicious black comedy, in which all our heroes are vile and everything can be bought and sold.

JJ Hunsecker (Burt Lancaster) is a newspaper columnist, so influential that the slightest mention in his column can make or break careers. He rules the New York politics and arts scene with a ruthless fist – and press agents like Sidney Falco (Tony Curtis) will do anything to get even the slightest sniff of a mention in the column. Hunsucker has a job for Falco: Hunsecker’s sister Susan (Susan Harrison) wants to marry jazz musician Steve Dallas (Martin Milner), and Hunsecker doesn’t approve – he wants the relationship finished. Falco may feel some qualms – but they don’t last long, and he’ll do anything he can to wreck the couple’s happiness.

Sweet Smell of Success is all about the grimy effort and lack of morals that sit under the surface of getting to that success. Because to achieve it in the big time you need to be as sinister, controlling and bullying as Hunsecker – and to try and get up there you need to be as conniving and weaselly as Falco. Both these characters are, in their own ways, almost totally reprehensible – and the film makes no attempt whatsoever to mitigate this. The film is appallingly ruthless and cynical, and its two lead characters are, to put it bluntly, complete shits and total bastards.

It’s a film that says the American Dream doesn’t even remotely exist in the way we like to think it can – that there is as much class and control in America as there ever was in the old world. And being decent and honest doesn’t get you anywhere – and sometimes even being conniving and doing whatever you’re told to do doesn’t either. It totally captures the bitter, cruel and imposing mood of New York high society at the time – unwelcoming, unfriendly, judgemental and brutal. For all its glamourous New York location, who on earth would look at this and say “I fancy a piece of that” – it’s the exact opposite of what American films often try to do.

This was Alexander Mackendrick’s first American film, and it’s perhaps his outsider’s eye that really helps the film to really go for it. Mackendrick’s Ealing films weren’t afraid to pull their punches – from the commentary on the corruption of big business in The Man in the White Suit to the dark comedy of The Ladykillers – and (working with genius cinematographer James Wong Howe) he creates one of the darkest (in every sense) film noirs ever. His camera prowls along the streets and he wonderfully captures both the bustle of New York clubs, and the menace of New York behind the glamour. He also shoots both Curtis and Lancaster in a way they never had been shot before – and both of them rise to the richness of the material to give possibly their finest performances.

Burt Lancaster’s Hunsecker is a total monster: a bully and a sadist, vicious and aloof. Lancaster’s stillness here really sells the part – he doesn’t move, everyone else does – and the film brilliantly uses his slightly patrician voice. Hunsecker’s cold, dead-eyed stare pierces through character and desperation, and the contempt he feels for Falco (and every other character) is there in every moment, from looks to subtle physical put-downs (even lighting a cigarette is a power play, laced with an almost sexual sense of control). He “loves this city” because he owns the place, lock stock and barrel. Hunsecker only has one weak point – his clearly incestuous love for his sister – but even that is just the excuse for more controlling, domineering behaviour in which people are only objects for his manipulation.

And no-one is more willing to be manipulated than Tony Curtis’ brilliantly sycophantic Sidney Falco. Hunsecker is vile, but Falco might be worse. Is there a less likeable lead in a movie? Falco has no principles, no morals, no conscious – he’s the worst sort of follower, the sort of kid who stands behind the bully and laughs loudest at every joke. On top of that, Curtis is incompetent and untrusted – the scene where he attempts to blackmail another columnist and is firmly smacked down is wonderful for its discomfort. Curtis is twitchy, desperate, always on the move and will do anything – from lying to planting evidence to openly pimping his secretary. Far from the “young man working his way up” that you might expect, he’s a ruthless, unprincipled opportunist, perhaps the best inverted presentation of American can-do ambition you’ll see on screen.

That’s where the film really works: the scenes between Hunsecker and Falco are simply marvellous: Hunsecker savouring every verbal blow and smooth smackdown – and Falco sitting, edgy and jittery, on the edge, laughing loudly to try and make sure he doesn’t become the target. The marvellous restaurant scenes – with Hunsecker barely able to bring himself to acknowledge Falco’s existence – are the film’s heartbeat: brutal battles where Hunsecker wins everything and lives are destroyed. “A man has just been sentenced to death” Falco gleefully points out – “You’re dead son. Get yourself buried” is Hunsecker’s smoother version.

Ah yes that dialogue. Written by Clifford Odets at incredibly short notice (pages were literally taken straight from the typewriter to the actors’ hands in front of the camera), this might be one of the sharpest, waspiest films ever written. So many quotable lines, with Curtis and Lancaster relishing every dynamic and scintillating one-liner that the script gives them (and there are many). “I’d hate to take a bite out of you. You’re a cookie full of arsenic” – who wouldn’t want dialogue like that? It’s a sensationally written film, and every scene offers a new delight.

It’s not perfect of course. Milton and Harrison are as lightweight and forgettable as Lancaster and Curtis are sensational, too strait-laced and conventional to really seize the interest. The second half of the movie is weaker than the first: the pay-off doesn’t quite match the build-up. Really a film that just followed Hunsecker and Falco about as they went about their daily work, without the sister plotline, might have been even more effective. But it’s probably a quibble on a film that works every time – and has such dense, wonderful dialogue you’ll want to wind back most of the scenes to watch them again. And those two lead performances: simply perfect.
Email ThisBlogThis!Share to TwitterShare to FacebookShare to Pinterest
Labels: 1957, Alexander Mackendrick, Burt Lancaster, Martin Milner, Media satire, Political satire, Sam Levene, Susan Harrison, Tony Curtis