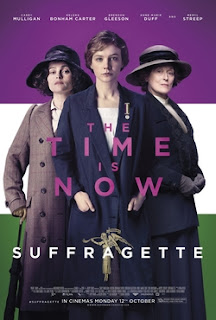 Votes for Women was a historic movement that looked to settle a gross injustice. It’s a major issue brimming with importance: and Lord doesn’t Suffragette know it. In fact, Suffragette is practically a textbook example of an important issue being turned into a bad film. Clunky, weighed down with its own bombast and stuffed to the gills with clichés, Suffragette fails to move and makes its vital political points seem leaden and dull.

Maud Watts (Carey Mulligan) is a young washerwoman, who one day finds herself accidentally swept up in a suffragette protest. Before she knows it, her friend Violet Miller (Anne-Marie Duff) has inveigled her to give testimony at a parliamentary hearing, where she meets Edith Ellynn (Helena Bonham Carter). Ellyn believes that peaceful struggle will lead nowhere and violent action is the only way to get what they want. As the violence escalates, Inspector Steed (Brendan Gleeson) is tasked to infiltrate and bring down the suffragette movement.

It should be more interesting. But Suffragette is a sluggish “issue drama” whose every frame drips with the self-importance of people who feel they aren’t just making a film, they’re making a “statement”. This feeling infects everything, from the heavy-handed dialogue (too many scenes feel like speechifying rather than dialogue) to the obvious characterisations. Nothing in the film ever really rings true, and nothing ever really grips. On top of that sloppily written, it doesn't really have any dramatic structure and events eventually peter out.

Mulligan’s saintly character – as a kind of suffragette every woman – goes through everything from abuse from her boss, to losing her home and children, to being force-fed in prison. It strains credulity – particularly as she’s playing some fictional archetype. The truly noble suffragettes are all working-class and put-upon, while Romola Garai’s upper-class wife quickly turns her back on the cause when things get risky. Bar Brendan Gleeson’s humane Inspector and Finbar Lynch’s decent husband (and even he performs an act of betrayal), every single man in this is a bastard – a paternalistic liar, a wife-beater, a bullying husband or an abusive boss. It’s just too bloody much. The film seems not to trust its audience to understand the story unless it’s acted out by a series of caricatures, as if we can’t appreciate that gender equality is a good thing in itself without a saintly sad-faced girl being mistreated by a series of misogynist ogres.

Mulligan is rather good but her angry denunciations and points during her scenes with Gleeson just sound like she’s mouthing research from the writer. The end result is, despite all the things Maud goes through, you just don’t really care about her. She feels like an empty character. Even the end of the film doesn’t revolve around her: Emily Davison is reintroduced just in time for the conclusion at the Derby. Why not just make a film about Davison? Why did they feel the need to place this uninteresting fictional character at the heart of it? Did they just feel it had to be a working class hero?

Because the script tries to cover every single element of the suffragette movement, it often feels like a box-ticking exercise. Meryl Streep gets the best tick, popping up to deliver a single speech as Emmaline Pankhurst before disappearing. But the collection of events thrown together don’t convince. Helena Bonham Carter does her very best to make Edith’s radicalism seem compelling and thought-through, but even that seems like a tack-on rather than something that really teaches us about any of the characters. Moral questions around violence and protest are almost completely ignored, and the film doesn’t really distinguish between those (essentially) willing to kill and those who wanted to protest within the law.

On top of its mediocre writing, the film is also only competently directed – its pace is often way off and sluggish, and most of the scenes are shot with an unimaginative televisual eye, mixed with standard “throw you into the action” shots for major protests. It all contributes to the entire venture not coming to life at all. For such a huge issue, and for all the importance it’s being treated with here, it just seems lifeless and rather dull.

This is despite the decent acting (Anne-Marie Duff is excellent, as are most of the rest of the principals) and the efforts of all involved. But it's just not engaging. The most moving and gasp-inducing moment is the end credits roll of dates where countries gave women the vote (1970 for Switzerland!) - but when the most moving thing you see in the film could have cut and pasted from a Wikipedia page you are in trouble.

But what can you say about a drama about women’s rights where the male Inspector comes out as the most interesting and nuanced character? That just doesn’t feel right. And that’s the problem with Suffragette. Nothing feels right. Everything feels off. The history doesn’t ring true, the characterisations feel forced, the events seem predictable and clichéd. There’s nothing to really get you impassioned here – other than with frustration about a bad movie fudging an important subject.
Email ThisBlogThis!Share to TwitterShare to FacebookShare to Pinterest
Labels: 2015, Anne-Marie Duff, Ben Whishaw, Brendan Gleeson, British Films, Carey Mulligan, Helena Bonham Carter, Meryl Streep, Political dramas, Romola Garai, Samuel West, Sarah Gavron