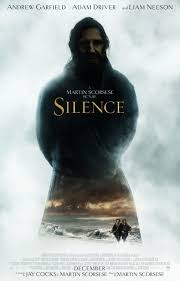 Martin Scorsese is well known as the director of the finest gangster and crime films ever made. But interestingly, he also has quite the sideline in searching religious epics – and in fact many of his films, not least Mean Streets and The Departed, dwell on feelings of Catholic duty and guilt, questions of doubt and faith. Silence, a book published in 1971, zeroes in on these questions by placing priests in impossible situations and seeing how their faith is tested.

In the 1630s, Japan begins a campaign of persecution against Christian converts. Jesuit priest Father Ferreira (Liam Neeson) witnesses his flock undergoing torture for their faith. Word reaches the Catholic church that Ferreira has committed apostasy. A few years later, Fathers Rodrigues (Andrew Garfield) and Garupe (Adam Driver) volunteer to head to Japan to continue the mission of spreading the world, and to find out the truth about Ferreira, who had been their mentor. In Japan, they find a dangerous and violent world where Christians face gruelling persecution. Both men find their faith tested – and God’s silence deafening.

Silence is a film that received a slightly sniffy review on release – but what were people expecting? This is a quiet, meditative, beautifully made film that raises profound questions around faith, identity and Christianity – and is brave enough to let people develop their own answers. It’s a slow-paced, thoughtful and (for such a dynamic film-maker) very calmly filmed work, that feels like it carries a great deal of personal investment – Scorsese’s interests in the effort and struggle required by faith, and about how few clear-cut answers there are in our understanding of religion.

On those terms, I found myself both engrossed by it – much more than I was anticipating. Scorsese combines astounding visuals and use of sound (and silence) to create a hypnotic film. The mists of Japan have rarely looked so beautiful, and the film’s astounding cinematography uses it to maximum effect to create a series of stunning images. One marvellous shot of a crucified man removed from his cross and carried to his funeral pyre is very moving in its simplicity and echoes Caravaggio’s Deposition from the Cross. At other times, silence is skilfully introduced, just as moments of seeming quiet are never truly silent. It’s a marvellously made film.

Within this beautiful framework, Scorsese explores ideas of faith and apostasy. How does faith work? How much is our communication with God private and how much does it need to be made public? Would you renounce your calling to save others – even if it meant turning your back on God? How much of all this is God listening into? How much is the act of conversion a selfish one, spreading your own glory? How many sacrifices are worth the celebration of faith – and what is the ultimate aim and reward of martyrdom? How can we even define martyrdom – and does it always revolve around death, or a can it be a private death of the spirit?

These are fascinating ideas, and the film presents a series of viewpoints on each of these, while never offering a definitive answer. While this is a film about men who question their faith, it is not a film asking the viewer to question theirs. If you hold faith, different solutions and answers will present themselves, and your own personal beliefs will guide what you feel is right and what is not. Some people you may find unforgiveable – others you may find foolish or even conceited in their faith, while others will find the same men brave and principled.

Scorsese directs all this with an astonishing sense of control and quiet reflection, letting the film breathe and never allowing melodrama to overwhelm reflection, or the character story. The film is unflinching in watching the matter-of-fact drowning, crucifiying and other killings of Christians, but it never feels like its making cheap points, strange as it is to see such visual beauty given to horror. It’s asking us how much of this we could sit and watch without agreeing to abandon something we believe passionately in as the ultimate truth.

Andrew Garfield performs with a passionate earnestness and absolute commitment. In many ways, as the reactive centre of the film, he has the least interesting part (and therefore fewer opportunities to shine than the rest of the cast) but he is very good in a difficult internalised role, and makes us invest in every step of Rodrigues’ tortured journey of increasing doubts and fears.

Driver has a flashier part, but does very well as a priest who wears his heart on his sleeve – and voices doubts, but also flashes of anger. He provides a lot of the initial energy, and demonstrates again what an intelligent and instinctive actor he is. Neeson as the fallen priest is able to invert his own reputation for mentors, while leaving the question open of how much his placidity and co-operation with the authorities is brain-washing or hiding far different feelings. 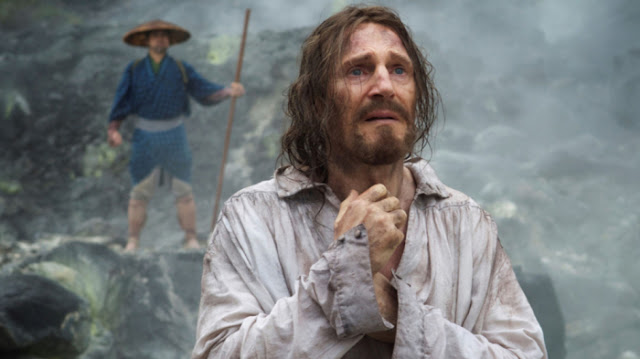 Scorsese recruits some of the cream of Japanese acting, and they deliver uniformly strong performances. Shinya Tsukamoto is excellent as Rodrigues’ mirror image, a man quick to denounce to save his own skin, but carries a kernel of faith at his centre. Tadanobo Asano is wonderfully controlling as Rodrigues’ interpreter, while Issey Ogata is outstanding as the leading prosecutor of the Japanese government, a man who seems a harmless, wizened old man, but whose eyes (and chamelonic body) are able to rearrange itself swiftly into looks of contempt and loathing.

Silence is a serenely made film, one that really wants to speak to those with Christian faith. Like the works of Carl Dreyer, it engages intelligently with themes around faith. I’d be fascinated to see what those who hold a stronger faith than mine make of it. But I thought this posed a series of compelling, and searching, questions about the unknowability of God – of his silence, but that silence not necessarily being indifference. It charts how hope can be found from despair – and how sacrifices we sometimes make for the greater good can also lead to new ways we can understand ourselves. It’s a very mature, brave and compelling piece of film making.
Email ThisBlogThis!Share to TwitterShare to FacebookShare to Pinterest
Labels: 2016, Adam Driver, Andrew Garfield, Christian movies, Ciarán Hinds, Historical epics, Liam Neeson, Martin Scorsese, Shinya Tsukamoto, Tadanobu Asano