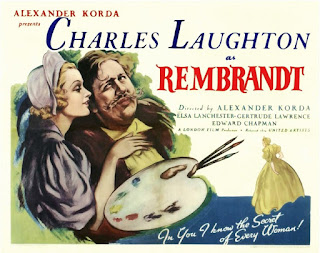 There are many artists I really love, but right near the top is Dutch master Rembrandt van Rijn. Rembrandt is remembered as being misunderstood in his own lifetime – which is sort of true. In fact, Rembrandt’s style fell out of favour and he basically went on a rags-to-riches-back-to-rags story not helped by constantly living outside of his means. Rembrandt actually follows the great man’s life pretty faithfully – and it even dances effectively around Rembrandt’s unusual domestic set-up.

The film begins with the death of the artist’s wife Saskia, and the rejection of The Night Watch by the Amsterdam militia. These events start a slow downward spiral for Rembrandt (Charles Laughton) towards a lack of fashion and an increased poverty. The film covers his consecutive relationships with Geertje Dircx (Gertrude Lawrence) and Hendrickje Stoffels (Elsa Lanchester), before ending shortly before the artist’s death.

The film is dominated by Laughton’s magnificent performance in the lead role. Laughton can effortlessly bring to life the impression of genius. His Rembrandt is an observant, quick-witted and sharply intelligent man, whose eyes observe everything and records it for future use. Of course, for the look of Rembrandt, Laughton had a hell of a lot to go on – few artists did as many self-portraits as Rembrandt. But what Laughton manages here is to capture the essence of the artist – that sense of wry amusement and a slightly bumptious insolence you get from a Rembrandt self-portrait.

Laughton also gives a warm humanity as well. In a wonderfully naturalistic performance, his Rembrandt is by turns gentle, amused, slightly naughty, wise – but always feels human. Korda’s film focuses on a part of his life, rather than the whole, which allows us to focus on the painter finding a more unique style and some domestic happiness – but only doing so after losing his wife and professional respect. He’s compelling to watch here, like the painter come to life: you can totally believe him, from when he’s berating the Guild for not understanding The Night Watch, to his befuddled hopelessness with money. 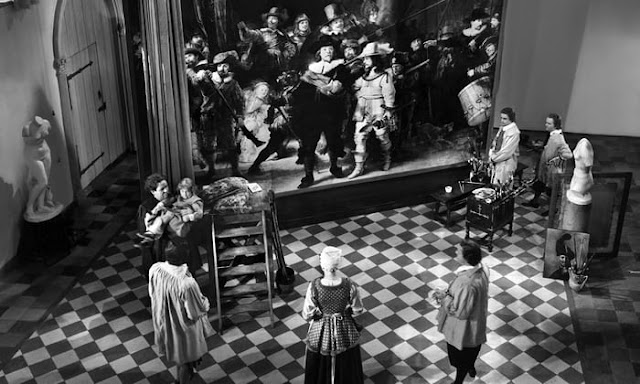 Korda’s film focuses on the personal rather than exploration of art – probably a good thing, since the style and grandeur of the original paintings is nearly impossible to capture in black-and-white academy ratio. This however works a charm, as we get two very contrasting lovers for Rembrandt, demonstrating different sides of his personality. Gertrude Lawrence excels as a shrewish, domineering Geertje Dircx, a woman who seems to take control of Rembrandt and his family after his wife’s Saskia’s death as if she is entitled to the role (interestingly Saskia doesn’t even appear in the film). A few weeks after Saskia’s death, Lawrence’s Geertje settles into the embrace of Rembrandt (who drifts into the relationship) with all the entitlement of an heiress.

By contrast Elsa Lanchaster portrays an earthier, gentler Hendrickje Stoffels, younger and more naïve than either Rembrandt or Geertje. If the first relationship saw Rembrandt as a man having his life organised for him, this second sees him sharing the role of parent. Having said that, while he obviously looks on Hendrickje with a loving fondness – and delights in making her happy and contented – it’s Hendrickje who effectively works out a dodge for the broke Rembrandt to keep trading art, and it’s she who takes runs the business for him. It’s a perfect marriage of personalities.

Although of course marriage is the one thing it can never be. Rembrandt was forbidden from re-marriage due to a complex arrangement in Saskia’s will: and a jilted Geertje quickly moves to have Hendrickje branded a whore. Considering it was filmed in the middle of the Hays Decency code, the film takes quite a modern stance on Rembrandt’s two long standing affairs: it’s clear that we are not meant to sympathise with the hypocritical burgomasters who denounce his love life (“It’s not fair. Why should he get away with it?” one of them moans).

The narrative parallels this pair of romances with the world of art and commerce. Noticeably Rembrandt often seems more comfortable with those of a similar class to himself: he chats amiably with a beggar he hires as a model (a perfect little cameo from Roger Livesey), and similarly flirts with a woman from his home town at a bar with a confidence he never seems to manage with either of his other love interests. The film pivots around this return to Rembrandt’s family home, with the film suggesting the artist used this time to reassess his life and aims – before returning refreshed to shake up both his art and home life. Korda’s film argues that Rembrandt’s own rejections and losses gave him a far greater understanding and appreciation for his craft – and its power – than he otherwise would have had.

Korda films all this with a lushness, with the sets, costumes and visuals constantly reminiscent of the styles of Rembrandt’s own work. Just as Laughton plays Rembrandt as a very grounded, humane character, so the film avoids sweeping melodrama to portray a very low-key and gentle story, that feels sweetly lacking in high-blown artistic intensity. It’s perhaps best summed up by the closing scene, where an ageing Rembrandt – taken for an old nobody by some young bucks in an inn – smiles serenely, enjoying the company and quoting Scripture at them with gentle satisfaction. He’s the contented, humane master – the man who seemed to capture the age and changed painting for ever. And then he borrows money off a friend (who asks him to please spend it on food) and heads straight to the paint shop. A slave to an obsession, but a man who still inspired love and affection – what could be more human than that?
Email ThisBlogThis!Share to TwitterShare to FacebookShare to Pinterest
Labels: 1936, Alexander Korda, Artist biography, British Films, Charles Laughton, Edward Chapman, Elsa Lanchester, Gertrude Lawrence, John Byrning, John Clements, Raymond Hartley, Roger Livesey