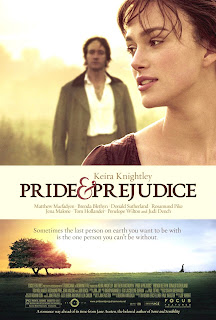 I’ve written before about certain books having been adapted so successfully there feels very little point rolling out another. If ever an adaptation set this principle, it’s the 1995 BBC adaptation of Pride and Prejudice. Not only did it perfectly capture the spirit and style of the book, with perfect scripting and direction, but the two lead actors – Jennifer Ehle and especially Colin Firth – were simply perfect (for all his achievements, the first line of Firth’s obituary will forever be “Darcy Dies”.)

So Joe Wright and his team were already climbing a mountain when they announced plans to make a new adaptation of Jane Austen’s most beloved novel. What they’ve produced in the end is a well-made, handsomely mounted film full of visual invention – that has been pretty much rejected by nearly everyone I know who loves Austen. It’s a film that, in attempting to plough its own furlough, has ended up not really pleasing anyone: for the casual viewer it’s an entertaining but forgettable watch. For the Austen fan it’s just plain not right.

Structurally the film places Elizabeth’s relationship with Darcy slap bang at the centre, and has little to no interest in anything else. This leads to major themes and relationships being neglected or outright abandoned in some bizarre cut choices. The film wants to front-and-centre Lizzy’s increasing isolation – so Jane is dispatched from the film for almost over an hour. Even more oddly, Wickham is cut down to a few spare scenes – which makes her passionate sympathy for him and anger against Darcy make very little sense. All this isolation also means we never really understand the social implications and importance of marriage – in fact the whole thing is basically turned into a Cinderella romance: Rich Man Meets Poor Girl (And No One Else Matters). 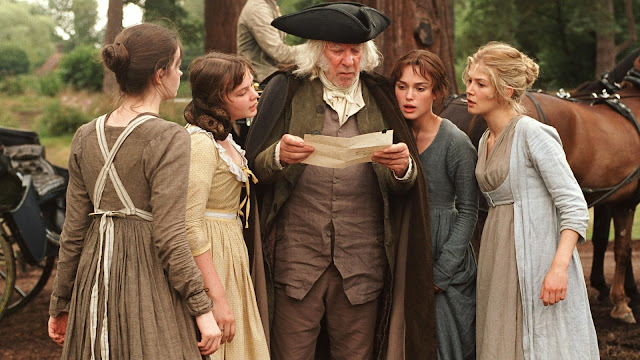 Which means a lot of the focus for the film lands on Keira Knightley. Is there a more controversial actor in film than Knightley? Oscar-nominated for the role, among my Austen-loving friends I have found only revulsion against her performance. She plays it with spirit but too much of a modern sensibility. She’s fine, but she’s just not convincing: she doesn’t look like her, she doesn’t have her warmth and wit and seems more like she’s wandered in from some sort of “flirty girls” comedy. Nothing really communicates the character’s intelligence and wit – and Knightley probably looks a little too modern for the whole thing to work.

On top of that the film doesn’t want her to be too unsympathetic at any point, so dials down her judgemental nature, and also reduces any possibility of us judging her partiality for Wickham by mostly removing him from the film. However, this also removes many of the obstacles from the plot that stand in the way of romance.

Matthew MacFadyen does a decent job as “Nice Guy In A Period Drama”, but the character is just wrong for Darcy. Like Lizzy’s tendency to rush to judgement, Darcy’s apparent coldness and snobbery have been watered down to almost invisibility. His first announcement of love is so genuine, so gentle, so loving that you are amazed that Elizabeth dismisses him out of hand. It’s no surprise this Darcy turns out to be a decent bloke, the edges of the character have been completely shaved off. This puts a big old dent in the plot, reduces his character development, and ruins the impact of sweet later moments like Darcy’s uncertainty when the two meet at Pemberley.

There are some good performances though. Tom Hollander is very funny as a social-climbing Mr Collins. Donald Sutherland gets so much warmth and twinkly good humour out of Mr Bennet that Wright even ends the film on him (another odd choice, but never mind). Judi Dench could play Lady Catherine standing on her head. Rosamund Pike is rather good as Jane – she totally feels right for the period. Brenda Blethyn largely manages to avoid turning Mrs Bennet into a complete stereotype. Saying that, Simon Woods portrays a version of Bingley so bumbling, tittering and awkward you are amazed either Jane or Darcy could be interested in him, let alone bear to spend time with him.

But then large chunks of the film feel odd. The screenplay works overtime to turn the film into a straight-forward star-crossed lovers story: so it’s Darcy and Elizabeth all the way, and the film is desperate to make them both likeable from the off. And if that means that, in a film called Pride and Prejudice, both the pride and the prejudice have to be junked to make sure even the stupidest audience member will like the hero and heroine, well that’s apparently a price worth paying. Lowering the Bennets’ social status as far as the film does, also turns the story into a full-on Cinderella territory. Darcy and Bingley are so posh an entire room falls silent when they walk in – in comparison the Bennets are so poor they share their house with pigs.

Ah yes the pigs. Why? The Bennets aren’t paupers. If they were, why would Collins want the place? Why would they be invited to the ball? Why would Bingley and Darcy even consider them as partners? Why would a family so aware of impressions have a home that is literally full of shit all the time? Why is Mr Bennet scruffy and unshaven – and why doesn’t anyone care? Who designed this? If the Bennets are so fixated on getting good marriages why do they literally live in a pig sty? It’s a visual idea that undermines the whole story.

It’s full of things like this that don’t feel right. The film junks most of the language of the original book, which makes it sound jarring (it even re-works Darcy’s first proposal: “in vain I have struggled, it will not do…” – large numbers of Austen lovers I know can recite those lines verbatim. This film apparently thought it could create a better version. It couldn’t). Large chunks of the film happen in the rain like some sort of version of Wuthering Heights. Why is that? Is it because professions of love in the rain are romantic in a Mills and Boonish sort of way? Or is it an echo back to Firth’s wet shirt?

Emma Thompson’s sublime adaptation of Sense and Sensibility demonstrated that it is completely possible to adapt an Austen novel into a two-hour film and still preserve the characters, relationships, major events and themes of the book, while also making a story that stands on its own two feet for non-Austen-ites. This film bungles its attempt to do the same.

But there are things Wright gets right. The camera work and transitions are lovely. A long tracking shot that weaves in and around the ball early in the film, taking in every single character is not only a technical marvel but really gets across a feeling of what these hectic and bustling social events are like. There is a beautiful time transition at Longbourn, as Elizabeth rotates on a screen and the camera takes on a POV shot, showing the seasons changing each time the camera revolves around through 180 degrees. The cinematography is luscious and Wright – his first film – shows he was more than ready for the step-up from TV.

It’s just a shame that the film they made doesn’t quite work. It doesn’t capture the sense of the book. It doesn’t capture the sense of the characters. It makes bizarre and just plain wrong choices. It’s a decent film, but it is not a good adaptation of the novel. And that’s a major problem, because if you are going to adapt something as widely loved and revered as this, you better bloody well understand the novel – and I don’t think enough people here did. It’s told with a sweeping romantic style – but they are adapting the perception of Pride and Prejudice rather than the actual story. The chemistry and romance aren’t there: the film even ends with an odd sequence of Sutherland and Knightley, probably because there was better chemistry between these two than the two leads. It’s a film that basically doesn’t work at all.
Email ThisBlogThis!Share to TwitterShare to FacebookShare to Pinterest
Labels: 2005, Brenda Blethyn, Carey Mulligan, Donald Sutherland, Jane Austen, Jena Malone, Joe Wright, Judi Dench, Keira Knightley, Kelly Reilly, Literary adaptations, Matthew Macfadyen, Rosamund Pike, Tom Hollander