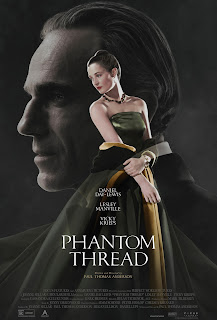 The last time Paul Thomas Anderson and Daniel Day-Lewis worked together, we got a true masterpiece in There Will Be Blood. Phantom Thread couldn’t be much more different. In place of rolling plains, oil, and Day-Lewis as a monstrously larger-than-life alpha male, we get confined rooms, handsome dresses and Day-Lewis as a pernickety, obsessive, creepy dressmaker. But Phantom Thread may also be just as intriguing, thought-provoking and memorable in its way as There Will Be Blood.

Reynolds Woodcock (Daniel Day-Lewis) is a leading couturier in 1950s London, whose fashions are highly sought after by the rich and famous. He lives and works with his sister Cyril (Lesley Manville), who dominates his life – and dispatches his various muses as their use comes to an end. On a break near the coast, Reynolds meets Alma (Vicky Krieps), a hotel waitress whom he takes back to London as his latest muse. At first Alma seems to be merely the tool of this fashion Svengali – but Alma has her own desires that quickly spark conflict in the House of Woodcock.

Paul Thomas Anderson’s film has lashings of Daphne du Maurier, Powell and Pressburger (it’s more than a little reminiscent of The Red Shoes) and a slickly inverted Pygmalion. It’s a film that slowly emerges as being about control and the way power relationships can shift and transform. Reynolds at first seems a twisted Henry Higgins: his muses come and go (and, it’s implied, fail to live up to his mother) – he becomes tired of them, and his sister, business partner, factotum and part-time mother-figure Cyril dismisses them when they have served their purpose.

Reynolds and Alma’s first meeting is one of creepy control. He asks her to memorise his order, wipes her lipstick away so he can “see her” and, in a late night “living mannequin” sequence, dresses her in a series of fabrics and clothes, and offers dispassionate comment about her body. What’s interesting in this sequence though, is that Alma only becomes uncomfortable when Cyril arrives and joins Reynolds in the process. It’s a hint of the developments that will emerge over the course of the film: Alma doesn’t want to share Reynolds.

That’s the tension the film explores from thereon: Reynolds seems to have all the power, but Alma pushes against this to forge her own position as something more than a muse. The film has an acute understanding of the psychology of power in human relationships, which is more than reminiscent of Rebecca: the exact motivations of the characters remain unclear (sometimes even to themselves) until late in the film. The film veers into My Cousin Rachel territory – while giving us a totally unexpected series of emotional developments that spin out of this, which shock but make perfect sense.

That’s because Paul Thomas Anderson has made a sharply observant film about human fallibility and our desire to understand our place in the hierarchies around us, and the unusual paths to contentment that we can find. Like The Red Shoes, it also feels like a film that really understands the psychology of Svengali figures, and adds a Freudian bent to it. Reynolds is looking for a mother to take the place of his own and he is drawn to muses who remind him of her, but who constantly fail to replace her. It’s in the weakness that Reynolds’ perfectionism drives him away from, that he is capable of finding love and happiness.

So the film becomes a series of wonderfully low-key power shifts, many of them revolving around meals. It’s established early that Reynolds demands very precise conditions for his breakfasts – most importantly silence; in every breakfast scene that follows, everything from the loudness of the crunching to the amount of scrapping of jam on toast tells you who is in control. 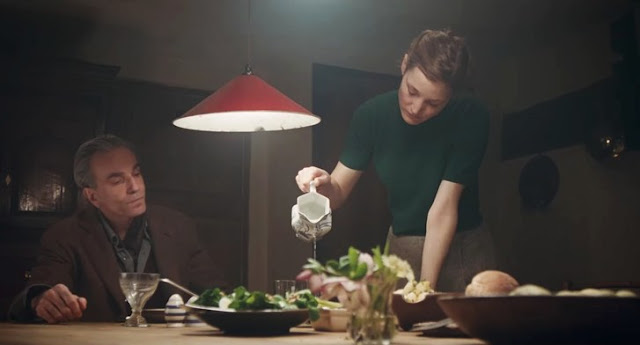 Because just as Reynolds wants to craft Alma to take on the perfect muse position for his dressmaking – so Alma wants to craft Reynolds into the perfect combination of high-achieving genius whose success she can vicariously enjoy, and a man who needs her emotionally. Anderson’s brilliant, bitter and waspy screenplay shows the different steps both characters dance through to achieve this. Alma’s solution, and its psychological impact, is brilliantly du Maurier; it’s out there, but makes perfect sense.

Visually the film is beautifully crafted. Anderson shoots a lot of the film with a combination of slow prowling shots, and cameras held at close-up or medium shots that regularly place the actors close to the camera. It means that we always feel like we are right in the middle of the action – looking over the shoulders of actors, or seeing their faces loom into the camera. It obviously creates a claustrophobic feeling, but also one of real intimacy – it’s like the camera is dressing the characters, the same way Reynolds does. But Anderson’s choices pull you closer into the action, and get you really thinking about the psychology of the characters you are watching.

And Anderson wants you to get into the psychology here, because he has cast three actors at the top of their game in this tight-character study. Day-Lewis is of course superb, as a character unnervingly precise and cool – his voice is a perfect combination of icy preciseness, and trembling emotional confusion. Reynolds is in many ways a child – his every whim must be followed, he explodes in foul-mouthed (hilarious) fury at any deviation from his procedures. But he’s also an emotionally stunted man who has never got over the loss of his mother, capable of strong sexual feelings and a yearning for closeness. It’s a subtle, controlled, low-key performance.

But Day-Lewis’ retirement has stolen a lot of the attention from Vicky Krieps, who is sensational as Alma. In many ways, she is the real protagonist of the story. Alma is at first our entry into the story – but we quickly learn we know or understand very little about her. She comes from somewhere in Europe, she may well be Jewish, but Krieps makes her hard to define. Unusual and impossible to understand, Krieps makes her a fascinating character. She emerges as a determined, strong-willed, manipulative figure, looking to have a firm place in her partner’s life – she’s both a toy that bites back, and a woman who will settle for no compromise in what she wants. It’s a fascinating performance. 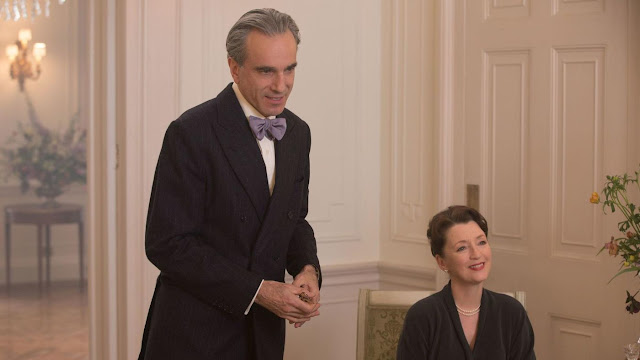 Lesley Manville rounds out the cast as the waspish Cyril, deliciously spitting out some cruel lines. Manville is terrific, and Cyril sits in an unusual place in the Woodcock house, partly catering to Reynolds’ demands, partly controlling and positioning him. This makes a perfect foil both for Reynolds’ demanding requirements for a mother, and for Alma’s desire to bring Reynolds under her own influence.

Anderson’s film is a beautiful, fantastically scored, wonderfully acted, intriguing character study, and an insightful exploration of emotional and sexual control and the traps we built for ourselves and for others. It’s a film where every scene is open to interpretation, where both the past and the future seem to haunt events and every resolution leaves questions. It’s a brilliant psychological study that rewards endless thinking, analysis – and I’m sure repeat viewings. I think this one could run and run.
Email ThisBlogThis!Share to TwitterShare to FacebookShare to Pinterest
Labels: 2017, Daniel Day-Lewis, Gina McKee, Lesley Manville, Paul Thomas Anderson, Vicky Krieps