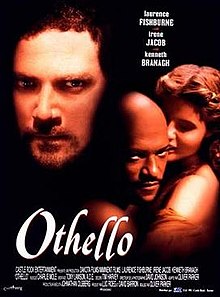 Othello is perhaps one of the most famous tales of betrayal and jealousy ever written. And yet Shakespeare’s tale of the noble general who descends into murder when convinced by his trusted ensign Iago that his wife is unfaithful, hasn’t often been made into a film. This is probably because its lead role requires a black actor and – for depressing historical reasons – most films aren’t considered good investments without a famous white actor in the lead (of course this has also been the case on stage). So we’ve had blacked-up performances from Orson Welles, Laurence Olivier and Anthony Hopkins – but this was the first proper adaptation of the play with a black actor in the lead role.

As the two leads, Laurence Fishburne and Irène Jacob are a mixed bag. Fishbourne has all the dignity and statue of the great general, and he brings a muscular physicality to the role which really works. He has a wonderful timbre to his voice and he handles the disintegration very well. He does sometimes feel a little hidebound by the language – treating the dialogue with a little too much reverence – but he’s the most believable Moorish general (for many reasons…) you’ve seen on screen so far. Jacob has greater difficulties – although many of these I think are due to this being her first film in English (talk about jumping in at the deep end) – and attempts to make Desdemona a free-spirit don’t really work that well.

Oliver Parker claimed he wanted to cast actors who weren’t associated with Shakespeare. Bizarre then that his cast is rounded out by Kenneth Branagh, the actor perhaps more associated with Shakespeare than anyone else alive. But then I guess when you can get Branagh in your movie, you aren’t going to say no. And it’s great he did, because this might just be one of Branagh’s finest Shakespearean performances: as if not also directing the thing (although many people mistakenly think he did!) freed him up to just focus on his performance. (It’s unfortunate for the other two leads that Branagh’s skill with both Shakespearean dialogue and performing it for the movies also serves to point up Fishburne’s more traditional take and Jacob’s discomfort.)

His Iago is superb, and he plays the part just right, never tipping the wink during his scenes with various characters, but playing Iago totally straight and completely genuine. He appears to be a decent, kind, lovely guy to everyone: it’s only in those asides to the camera that we see his real self, although even here he treats us with just as much charm. His Iago is the sort of guy you’d go for a drink with – and then be shocked to hear he had smilingly bad mouthed you to all your friends. Branagh also adds a homosexual undertone to the film, his Iago having incredibly mixed, repressed feelings about Othello: he seems genuinely moved when Othello makes him his lieutenant and a half twitch of regret crosses his face when the general dies.

Not that it stops him from being a bastard the rest of the time – and Parker does a very neat line in bringing the pivotal seduction of Othello to life on camera. On stage, Iago’s entrapment of Othello is a single, poison-dripping conversation – here, taking advantage of what you can do with film and editing, Parker spreads it over three locations: first a training-ground skirmish outside (where Othello bests Iago), then a sort of armoury changing room (where the outside is still visible), then finally a dungeon. As each lie gets more seductive, so Othello is literally dragged deeper and deeper into the castle. Then we get a neat flip: when he’s fully sold on Desdemona’s treachery, and begins raging and storming, we end up on huge open beaches or castle battlements, as if Othello has been reborn into a larger, refocused world.

This device smoothe out one of the problems with the original play – rather than Iago turning Othello against his supposedly beloved wife during one chat, the cuts from location to location (and different times of day) give the impression of a prolonged disintegration. Othello begins to get the first lines of each section, giving the impression that he has been dwelling on these lies in the interim, and that he is now the one bringing the subject back up, unable to stop prodding at it. It’s makes for a more convincing (and modern) psychological portrait of the corrosive triumph of jealousy than can be achieved in a traditional stage version. 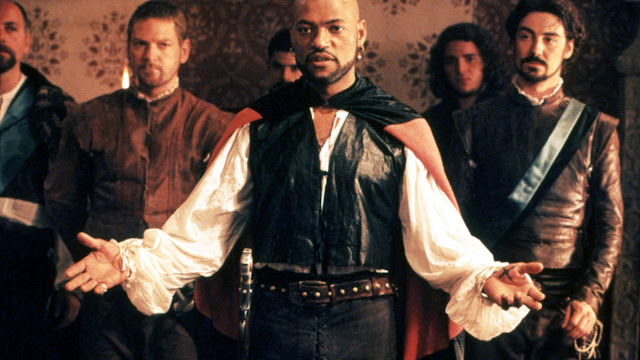 The film has moments of invention – at one point Iago pours poison into Roderigo’s ear while they lie under a wagon where a couple are noisily rutting – and it does some really interesting stuff as mentioned with the “seduction” of Othello. Parker also throws in some expected cinematic tricks – so we get moments of Othello fantasising over Cassio and Desdemona together. But Parker’s not the most unique or challenging director, and he mostly shoots the film with a traditional straight forwardness, using a very traditional setting and editing style.

The film has other problems, too. Othello and Desdemona don’t have much chemistry between them, and Fishburne’s emotionally distant performance makes Othello harder to root for. Maybe this is just Branagh unbalancing the film – his Iago is so compelling, it throws off the film. Parker tries to make Desdemona a stronger character, but this doesn’t always work. Jacob’s slightly awkward tension with Shakespeare is part of this, but we also get the confusion of a Desdemona who fights for her life at the film’s conclusion and then strokes her husband’s head with affection as she dies.

Other performances don’t quite work. Michael Maloney is too overblown as Roderigo – though this Shakespearean wimp does at least get to genuinely threaten Iago and is slightly more convincing for the series of fights Iago puts him up to. Between them, the script editor and Anna Patrick turn Emilia, one of the play’s most intriguing characters, into a blank – she barely has a line in the first hour, and those she does have are delivered pretty blandly. Nathaniel Parker, though, is pretty good as Cassio (incidentally, Parker is of course the director’s brother, and Anna Patrick is the director’s sister-in-law – it’s a home movie!).

The main problem? As the play heats up to the final confrontations, the film slows right down. It’s hard to believe – as we enter Act 5 of the play – that there could still be half an hour of the film left, so snappy have the first four acts been. But the film dawdles and drags over the finishing line – and all the chase scenes of a desperately fleeing Iago can’t save it. For a film which has trimmed the play quite successfully into something sleek and fast-paced, it’s a shame that it drops all this for a wordy and over-played final half hour.

Of course Parker throws in decent moments: I like Cassio slipping Othello the knife he’ll use to kill himself. I really like Iago crawling his way on the bed loaded with dead characters, as if to try and force himself back into their story. The symbolism has been overplayed – and the image of two bodies buried at sea, water trails entwining, has been signposted far too often earlier – but these small moments work, even while the rest of the film’s conclusion drags. And maybe that’s because you don’t really care that much about Othello – he’s never seemed like a character easy to empathise with. And without that, the film can never completely work.
Email ThisBlogThis!Share to TwitterShare to FacebookShare to Pinterest
Labels: 1995, Box office bombs, Gabriele Ferzetti, Irène Jacob, Kenneth Branagh, Laurence Fishburne, Michael Maloney, Michael Sheen, Nathaniel Parker, Nicholas Farrell, Oliver Parker, Shakespeare