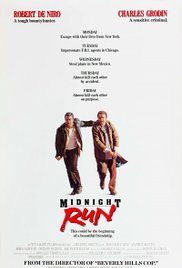 There are few comic set-ups you can get better mileage from than an “odd couple” – they meet, they argue, they grow closer, they fight again, they reconcile. It’s a standard formula. Midnight Run throws this together with a road trip formula (two people have to get from A to B but via every other letter of the alphabet). Really it should be hugely predictable. But Midnight Run is well written, very well acted and hugely fun – it manages to feel both light and frothy, but also sufficiently real and dangerous. It’s a great comic movie.

Jack Walsh (Robert De Niro) is a down-on-his-luck bounty hunter. Having been run out of the Chicago police force years ago for not taking a bribe, he’s skilled at his job but fundamentally unlucky and disenchanted. He’s looking for one big job to get him out: and it comes when mob accountant Jonathan “The Duke” Mardukas (Charles Grodin) skips bail. Hired by bail bondsman Eddie Moscone (Joe Pantoliano), Walsh has four days to find the Duke bring him back to LA before his bail is forfeit – manage it and he’ll get a cool $100k. But the Duke has stolen millions from the mob – so they want him dead, the FBI want him to testify, rival bounty hunters want to take him in – it’s all working out into a very long week for Walsh.

I really enjoyed Midnight Run when I first watched it years ago – and it’s been years since I’ve seen it – so it’s a delight to find it is as good as I remember. In fact, if anything, I think it might be better. It’s very funny – without anyone playing the material for overt or obvious laughs – but it’s also got a lot of soul. It never loses sight of the characters at its heart, in particular the loneliness, sadness and regret at the heart of Walsh, who presents a chip-on-his-shoulder stance to the world, to hide a decent and honourable man who can’t believe his principles are rewarded.

De Niro took on Midnight Run because he wanted to try comedy (he had just played Satan and Al Capone, so probably had earned a rest). Walsh is probably one of his best comedic performances, because he treats it with the investment he gave his greatest roles. He makes Walsh a real person – and he’s willing to downplay the comedy. He doesn’t mug or play to the camera (as he has more recently), he just plays the role with a slight wryness, a touch of lightness from the actor, while the role itself is kept real. His increasing frustration and world-weary resignation matches up perfectly with the hint of sadness he keeps under the surface. It’s a very effective performance.

It helps as well that De Niro allows Charles Grodin to carry the bulk of the comedy. Grodin was cast over the wishes of the studio – but it was an inspired move as the chemistry between the two actors is fantastic. They play off each other brilliantly, Grodin the more worldly, urbane and dry accountant, opposite the stressed out Walsh. Grodin is very funny, and very genuine – and he’s as whippersmart as the Duke himself, constantly keeping us on our toes as to when the Duke is telling the truth, and when he is pulling the wool over our (and Walsh’s) eyes.

The film throws these two into a series of increasingly hilarious events – from a panic-attack on a plane, to a sneaky piece of con-man work in a back-district town – but mixes it up with genuine moments where the two open up to each other (there is a wonderful scene where Walsh, under the Duke’s gentle probing, final opens up about his past). Each of these moments is wonderfully played, and works so well because the two actors have a genuine connection between them. Both lift the other: Grodin clearly helps De Niro relax and loosen up, De Niro encourages Grodin to bring a greater depth to his acting than ever before.

The contrivances and competing parties they take on also throw in plenty of fun problems. My recording from the BBC from years ago was somewhat sanitised, so it’s a surprise to hear how many times De Niro uses the f-word in this film! Martin Brest films all this with a controlled restraint – perhaps a little too much control (Yaphet Kotto has talked of his misery of performing endless takes of even the simplest scenes). But the dangers Walsh has to take on walk just the right line between feeling real, and feeling comedic.

So we have a sinister gangboss (played with lip-smacking relish by Dennis Farina), but his underlings on the ground are realistic-feeling, but non-too-bright gangsters (sharp enough to keep track of Walsh, dull enough to constantly say the dumbest things). The Feds are led by a tensely wound-up Yaphet Kotto, but the comedy comes from his cold stares at his underlings, who are prone to state the obvious. John Ashton is good value as a rival bounty hunter, a regular joe not-as-smart-as-he-thinks, but more than smart enough to win the odd hand. Joe Pantoliano gives possibly one of his most Pantoliano-performances of weasily whininess as Walsh’s bail bondsman boss.

Midnight Run rattles along brilliantly. It’s hugely entertaining, with a series of surprisingly high-blown action set-pieces (all met with a dry reaction from the Duke – “I’m sure we’re completely safe” when a pursing gun-laden helicopter temporarily drops out of view – and in turn a furious “Will you shut the fuck up!” from Walsh). Martin Brest gets the balance just right between comedy and drama, and creates a very funny movie where you end up caring a great deal for the characters. It’s a road-movie, buddy comedy that feels fresh and really works because it manages not to feel like it’s trying too hard. And of course it has a great closing scene – and one of my favourite end-lines to a movie ever: “Looks like I’m walking”. Check it out. You’ll like it.
Email ThisBlogThis!Share to TwitterShare to FacebookShare to Pinterest
Labels: 1988, Buddy movie, Charles Grodin, Comedy, Dennis Farina, Joe Pantoliano, John Ashton, Martin Brest, Philip Baker Hall, Road movie, Robert De Niro, Yaphet Kotto