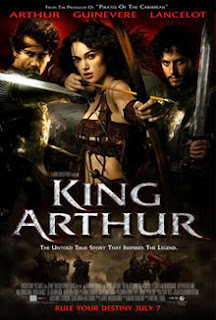 The story of King Arthur has entertained generations for so long, it’s actually a bit of a surprise that there hasn’t been a great movie made about it. Sure there have been entertaining guilty pleasures (like my love for the bobbins Excalibur) but there hasn’t been a great action adventure made about the legendary king. And this Jerry Bruckheimer actioner sure ain’t it. But it re-enforces my seemingly never-ending appetite for distinctly poor, big-budget, epic films.

Arthur (Clive Owen) is a half-Celtic Roman cavalry officer who commands a Sarmatian cavalry unit, serving a fixed term of service with Rome. They help to guard Hadrian’s Wall against rebel native Britons. Before their discharge, the knights are given one last job: go behind enemy lines to rescue a prominent Roman citizen living beyond the wall. Once they arrive, they find he has enslaved the local Brits – including imprisoning a young woman named Guinevere (Keira Knightley). Knowing a Saxon invasion force lead by the fearsome Cerdric (Stellan Skarsgård) is ravaging Britain – and that the Romans are withdrawing from the empire – Arthur decides to lead the whole group back to the wall and safety.

King Arthur isn’t a terrible film, just a totally mediocre one. It’s an uninspired coupling together of half-a-dozen other better movie: from its Dirty Dozen line-up, through its Gladiator style score (Hans Zimmer rips himself off again), to its remix of a thousand period sword epics from Spartacus on, mixed with its Braveheart style design and battle scenes. It’s almost completely unoriginal from start to finish. There is no inspiration here at all – it’s made by people who have seen other films and based everything on that rather than wanting to make a film themselves.

It even wraps itself up with an unseemly haste, as if all involved knew they hadn’t nailed it so decided the best thing to was to knock the whole thing on the head and call it a bad job.

The film probably stumbles from the start with its claim to present a sort of “true historical story” of King Arthur. Now I’m not one to get hung up on historical accuracy too much – except when it’s making extravagant claims which are just not true – but the “true story” here is bobbins. Nothing really feels right – from the Roman politics to the idea of a group of loaded Roman settlers setting up a huge estate deep into Scotland (I mean what the fuck was Hadrian’s Wall for eh?). The knights bear very little resemblance indeed to their legendary counterpoints. In fact it’s almost as if they had a script about a brave band of Roman soldiers and just stuck the name King Arthur on it for the name recognition (perish the thought!).

The idea of a group of seasoned, grizzled warriors isn’t a bad one – and it works rather well here because most of the actors in these roles are pretty good (particularly Mads Mikkelsen as a sort of Samurai Tristan). It makes for some interesting dynamics and always some fine character work – the best arc going to Ray Stevenson’s Dagonet as a knight who finds something to fight for. It also contrasts rather well with Stellan Skarsgard’s world-weary villain, who’s seen it all and finds it hard to get excited about ravaging and pillaging anymore.

But it’s a shame that this promising set-up gets wasted. After a good start, when we get to see all our heroes’ personalities reflected in their fighting styles as they repel an attack on a bishop, these dynamics quickly settle down into the usual tropes: you’ve got the joker, the cocky one, the reluctant one who’s only out for himself… Fortunately the Director’s Cut (which I watched) deletes the worst of Ray Winstone’s comic “banter”, but it’s still pretty standard stuff.

The mission behind the wall then pretty much follows the pattern you would expect: the guy they go to rescue is an unsympathetic bastard, they find themselves protecting the weak, it’s a dangerous journey back to safety, blah-blah-blah. Although a battle on the ice has some genuine excitement to it, there isn’t anything new here at all. Everyone just feels like they are going through the motions.

When the battles kick off in earnest, they are pretty well mounted – even if they are hugely reminiscent of the opening battle of Gladiator and the low-camera, immersive battles of Braveheart. Sure there is a smoky immediacy about them, like a sword wielding Saving Private Ryan, but it’s still pretty much what you would expect. The action pans out with no real surprises – our heroes and villains even match up for the expected clashes.

Clive Owen is a fine actor, but he is manifestly wrong for the role of a classical hero and the awe-inspiring battlefield heroics he is called to carry out here. He’s too modern an actor, with too much of the world-weary smoothness to him, for him to really convince as this hardened medieval warrior. Owen’s delivery and style is so restrained he can’t bring the bombast or elemental force the part requires. Allegedly he was cast because Bruckheimer believed he would be the next James Bond – the actor they turned down for Arthur? Daniel Craig…
Similarly Kiera Knightley is just as miscast. Let’s put aside the fact that she is half Owen’s age. There is a prep school headgirlishness to her that just doesn’t work when we are asked to buy her as woad-covered warrior princess. She’s too strait-laced, too polite, too sophisticated. When she does step into the full-on Boudicca look, you’ll giggle rather than tremble. For all her exertion, she’s not convincing in the role either.

But then that’s King Arthur all over: trying hard but not convincing, with such a tenuous link back to the original myth that the fact they are just using the Arthur name to flog some more tickets is all the more obvious. Major elements of the legend are missing – in particular the Arthur-Lancelot-Guinevere love triangle is cut down to the merest of suggestions, enough for it to be noticed but not enough for it to feel like a real plot – and other elements (Merlin, the Sword in the Stone, the Round Table) seem shoe-horned in for no real effect. It’s basically just a bombastic B-movie, a sort of Gladiator rip-off without the poetry. Moments of fun, but still not that good.
Email ThisBlogThis!Share to TwitterShare to FacebookShare to Pinterest
Labels: 2004, Antoine Fuqua, Clive Owen, Historical epics, Hugh Dancy, Ioan Gruffudd, Joel Edgerton, Keira Knightley, King Arthur, Mads Mikkelsen, Ray Stevenson, Ray Winstone, Stellan Skarsgård, Stephen Dillane