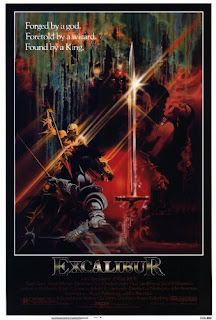 John Boorman had wanted to make a film about King Arthur for over a decade, but it only came into being after his plans for an adaptation of The Lord of the Rings fell through (the suits were convinced the film couldn’t be a hit – good call). So, with a lot of prep work for Tolkien in place, Boorman moved a lot of his ideas for LOTR over to Excalibur. In doing so he created something probably truly unique – a bonkers version of the Arthurian legend, so consistently Wagnerian (often literally), high-falutin’ and overblown that it has a strange integrity in its operatic silliness.

The film begins with Arthur’s conception, a result of King Uther’s (Gabriel Byrne) lust for his ally’s wife, Igrayne (the director’s daughter Katrine). Merlin (Nicol Williamson) agrees to magically disguise Uther as Igrayne’s husband for one night, and in return spirits away the resulting child to be reared ignorant of his heritage. Years later, with a leaderless kingdom in chaos, Arthur (Nigel Terry) draws the magical sword Excalibur from the stone, and proves himself as king. He marries Guenevere (Cherie Lunghi) and brings Sir Lancelot (Nicholas Clay) to Camelot – oblivious of their love for each other. Slowly this love destroys the peace of the land – encouraged by the schemes of Arthur’s vengeful half-sister Morgana (Helen Mirren).

Excalibur is a film set in a completely heightened middle-ages dreamworld, as if it’s a series of drawings from an illustrated edition of King Arthur brought to life. The design of the film is dialled up to eleven: the armour the characters wear is ridiculously elaborate, shiny and eye catching. The characters never seem to take it off: Uther even has sex wearing it (poor Igrayne is completely naked – that can’t have been comfortable for her). Full armour is worn at meals, wedding, social events, everything: at the same time it’s brilliantly ineffective, punctured with ease by axes and spears. 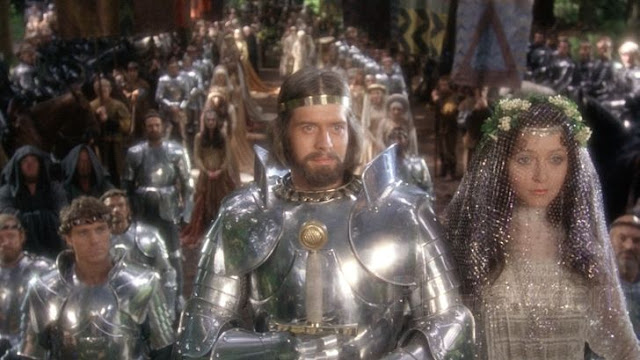 The rest of the design of the film is equally overblown. Camelot seems to have been literally made from silver and gold. Lancelot kips in the forest and sleeps in the nude. Battle scenes are filmed on moody, misty nights, with horses and knights riding with insane riskiness at each other. Excalibur itself is almost impossibly shiny and unblemished and occasionally glows green. Everything has a high-artistic feel to it, like a Romantic painting. Nothing looks real – it uses a “rule of cool” aesthetic, anything that looks good from anything approaching medievalism is used. 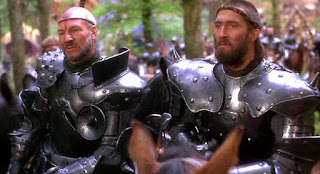 The acting itself follows this operatic style. Half the dialogue is delivered shouting: Patrick Stewart in particular must have lost his voice while filming this one. Filmed in Ireland (it practically kickstarted the Irish film industry), many Irish actors got their first film break here, not least Gabriel Byrne (a furiously lusty Uther), Liam Neeson (a drunken oafish Gawain) and Ciarán Hinds (growling in the background). Each roars through their dialogue, perhaps none more so than Corin Redgrave who screams his with such flemmy passion it’s often hard to work out what exactly he’s saying.

There are quieter moments from the three leads, even if all three of them don’t really have the charisma to impose themselves on sketchily drawn characters. Cherie Lunghi adopts an odd, part-time Irish accent as a bland Guenevere. Nicholas Clay is an upright Lancelot who simmers with guilt but is just a wee bit dull. Nigel Terry’s performance as Arthur (from young yokel to tortured king) gets better the more times I see it, but it lacks a certain star quality. But then in Boorman’s design, these three characters are just tools of fate rather than real characters – and the film has so much story to cover it often has very little time for character development.

The real stars of this film are Nicol Williamson and Helen Mirren. The two actors had a long-standing animosity – Boorman deliberately cast them to get an extra spark out of their scenes. But both actors seize their colourful characters – and have the time to add some depth to their bombastic, larger-than-life moments. Mirren gets to express bitterness and fury under simmering sexuality, as well as a genuine love for her son. Williamson is fantastic: playful, half nutty professor, half vengeful force of mystic power, he turns Merlin into an eccentric but somehow sinister old man. Williamson finds bizarro and unique line readings of even the simplest lines, stretching the material in the way only a really great actor can. He’s such an electric and interesting character, that he makes a performance that’s basically well over the top, hugely enjoyable and also even rather sweet. 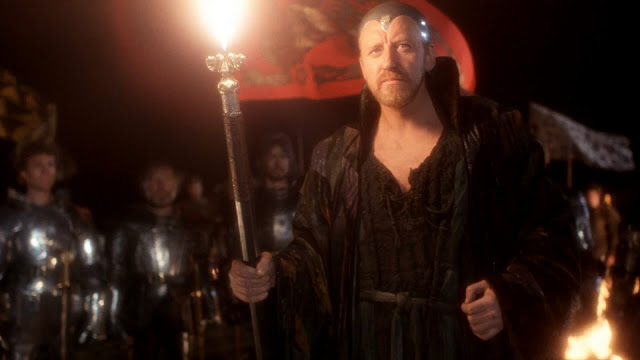 As such, Williamson is perfect for Boorman’s overblown, crazy film. The score uses Wagner and Carmina Burana to great effect, and the closing moments are shot before a giant blood red sky. Boorman’s shiny, colourful world effectively melts down in the second half of the film into musty, moody greys: his concept of Arthur losing his way and the kingdom disintegrating works extremely well, and means we get a real sense of things falling apart. The Grail Quest is like a creepy fever dream – with knights we have known dying in gruesome ways, freezing in chapels or hanging in a tree with their corpses picked clean by crows (of course one crow eats an eye!). 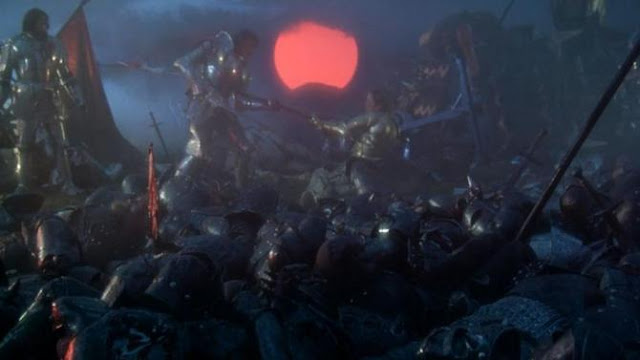 In many ways Excalibur is a very silly film: it’s hard to believe it was made six years after Monty Python and the Holy Grail, as much of its design and action is more than a little reminiscent of that film (it’s probably the only parody you could argue was made before the film it best sends-up). You probably need to see it at a certain age or enter into it with the right mindset for something that walks a difficult line between fairy tale and earthy campness. But I still love it.

Because Boorman really goes for it here. You know from the early sequence of Uther and Igrayne having sex against a background of actual fire, in full plate armour, intercut with a lingering death of Cornwall impaled on a series of spears in Uther’s camp (his death and Uther’s climax are of course cut together) what sort of film you are going to get. Everything is OTT. The drama leaves nothing behind, and Boorman wisely removes any sense of restraint from this telling of the legend. It looks gorgeous – even if dated moments like the Lady of the Lake are more likely to raise sniggers than not – and it really, really goes for it. Not many other films could get away with something so over-the-top and bizarre: but this sort of does.
Email ThisBlogThis!Share to TwitterShare to FacebookShare to Pinterest
Labels: 1981, Cherie Lunghi, Ciarán Hinds, Corin Redgrave, Fantasy, Gabriel Byrne, Helen Mirren, John Boorman, King Arthur, Liam Neeson, Nicholas Clay, Nicol Williamson, Nigel Terry, Patrick Stewart, Paul Geoffrey