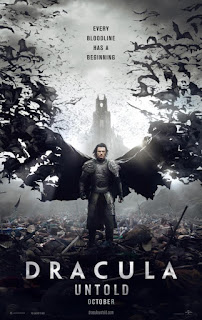 Every studio wants its own Cinematic Universe. Because the lesson from Marvel’s patient and excellent build of an entire world is that people will come and see every single film you make in a series. Right? Perhaps that explains the painful attempts of Universal to turn one of their few recognisable assets – monster movies – into some sort of bizarre linked universe. The project is currently in terminal decline after the flop of Tom Cruise’s The Mummy. But before that, a reboot had already been attempted with this bizarre retelling of the Dracula origins story.

Vlad the Impaler (Luke Evans) is a guy who wants to put his life of impaling behind him. All he wants is to lead his people peacefully in Transylvania. So imagine his disappointment when his boyhood rival Sultan Mehmet III (Dominic Cooper) arrives and demands the tribute of the first born sons of Transylvania – including Vlad’s son Ingeras (Art Parkinson). Vlad umms and ahs and then he decides – y’know what – not on his watch. But how can he keep his people, his son and wife (Sarah Gadon) safe? Well the only solution is to take on the mighty Power of the Vampire from a mysterious cave-dwelling creature (Charles Dance). Vlad now has unlimited strength for three days – but can he resist the craving for human blood that will make the transformation permanent? And will the powers last long enough to repel the Turks?

Okay. So obviously this film is complete rubbish. I mean it really is. It’s hilariously overshot – the action sequences are frequently hard to follow, so swiftly does the camera swoop and swirl like the bats Vlad can transform into. Shore is in love with showy shots – one battle is seen through the reflection on a CGI sword that is thrown in the air and twirls in an arc downwards (yes it is as complex and unengaging as I made it sound).

The plot is complete bobbins. It’s all “Forsooth my lord” and “We make for the monastery!” (a building, by the way, of unlimited size that seems genuinely able to accommodate most of the population of Transylvania). The film wants us to remember that Vlad is a cool bad-ass but also that he is ashamed of his life of sticking people on poles (needless to say, his signature move breaks out eventually). Vlad is a vampire and a monster – but he is also someone we need to root for, so he is portrayed as a lovable family man who never really seems that tormented by urgings for blood.

Luke Evans. One day he will be a star. If you could find a good performance in a terrible, stupid film it would be his. He is fully committed and he gives the part so much emotional depth – way more than is in the script. He really, really sells Vlad’s humanity and makes his character feel like a warm, lovable guy – but he mixes it with an edge behind the noble call of duty. Evans is genuinely rather good in this. The guy deserves so much better.

I’ll give a pass as well to Sarah Gadon and Art Parkinson, who at least treat the parts with a certain respect. Charles Dance has fun under bizarre make-up as a wizened monster. Everyone else is here to be as over-the-top and stupid as possible – not least Dominic Cooper, whose ludicrous accent, utterly unimposing frame and inexplicable sudden detailed knowledge of vampires makes for a deeply stupid, bad performance. But then everyone is going for it – Paul Kaye leaves no piece of scenery unchewed in his brief performances – and going for it badly. Everyone comes out of it badly.

The plot makes no sense: a strange gypsy emerges from nowhere to try and serve Vlad (why?) and then only returns at the end to help set up a sequel-that-never-came. Every decision Vlad makes is terrible. The villagers oscillate wildly from pathetically grateful yokels to “burn him!” lunatics to – well it would be spoilers, but let’s just say there is quite the body count. In fact, the only thing really interesting about the story is wondering what will make Vlad remain a vampire (which we all know he will do) – of course it is a “noble sacrifice”.

The biggest problem with the film is that Vlad is both far too powerful and far too noble. Since he can literally kill thousands of people single handed, why does he waste time taking his people into the woods – why not ride out single handed to meet the Turkish force and take them out? If he is so noble that he is never tempted once to keep the powers of a vampire for selfish reasons, where is the dramatic tension?

The film eventually ends in another overblown, stupid fight scene with bats and invulnerable vampires flying about the place. That’s before we head into an unearned coda in the modern age which sets up a sequel that is not coming, and includes a few groan-worthy references back to the original novel. But then this is a cartoon made by people who thought that they didn’t need to bother to make a good movie at all if they slapped the Dracula name on it.  I suppose you could say it’s just trying to entertain: but with no real interest in doing anything other than making more movies off it later, it’s a bit of a pointless mess.
Email ThisBlogThis!Share to TwitterShare to FacebookShare to Pinterest
Labels: 2014, Charles Dance, Dominic Cooper, Franchise Killers, Gary Shore, Horror film, Luke Evans, Sarah Gadon