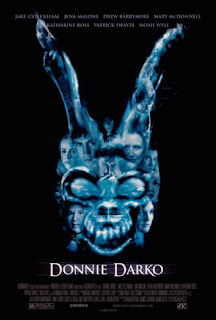 Donnie Darko was a surprise cult hit. In fact, it was such a cult hit that Kelly made a “director’s cut” version of the film five years later. Funnily enough, the Director’s Cut was largely rejected by the very people who loved the first film. Why? Well probably because the film was loved because it was so weird. It was so esoteric, so hard to understand, so much of its logic unclearly defined, that much of that love was based on trying to work out what the hell is going on in it – and the director’s cut supplies lots of answers, ruining the game!

In 1988, troubled teenager Donnie Darko (Jaky Gyllenhaal) sleepwalks out of his house onto a local golf course and meets with a mysterious figure in a gruesome rabbit costume – “Frank”. Frank tells Donnie the world will end in 28 days, 6 hours, 42 minutes and 12 seconds. Donnie sleeps on the golf course overnight – and returns home to find a jet engine has crashed through his bedroom. Plagued by strange visions and hallucinations, and visitations from Frank, is Donnie suffering from schizophrenia or is he genuinely in a position to save the world? And is there a danger from the way Frank is starting to influence Donnie’s actions?

Richard Kelly’s film is a bizarre, inventive, dreamy, creepy oddball flick that deliberately never really explains what the hell is going on. Never mind the mystery of Donnie’s mental state – the film’s confusing structure, its unexplained elements of time-travel, mind-control and predestination, all of this is just left hanging out there. It’s actually a testament to how much restriction can sometimes be the mother of invention. Kelly was told that the film could not be longer than a couple of hours, meaning a lot of the more traditional explanation (reintroduced for the director’s cut) was removed to keep the run-time down. But the great thing is, this actually leaves it very open for the viewer to create their own idea of what the film is about and what is going on. It really works.

This is particularly because Kelly manages to marry the clever-clever weirdness with a real emotional investment in the characters. Not just in Donnie either: his family are all extremely well-drawn, who we grow to care for over the course of the film, from his cheery father to his loving but frustrated mother, brilliantly played by Mary McDonnell. Equally strong is Maggie Gyllenhaal as Donnie’s sister. These characters, along with dozens of other characters quickly established, but all feeling very real, are what keep you interested in the film. If it was just oddness and alienating weirdness, it would be hard to care. But this is a story that mixes science fiction oddness with genuine family drama heart.

There is a lot of oddness in there though. Frank is a character practically designed to be iconic, a twisted giant rabbit like a demonic Harvey. Combined with this are a series of curiously unsettling images and storylines. So we get Donnie with visions of streams of transparent liquid streaming out of people’s chests – possibly their future paths leading them forward. We get Donnie facing strange barriers, that seem to repel and reflect his world. Donnie is plagued with strange visions and increasingly unsettling instructions from Frank. He carries out a series of impossible feats under Frank’s direction. There are elliptical conversations about time travel and physics and while the film drops hints it never explains a damn thing. So when you finally get to the end – well lord alone knows what happens, but you’ll certainly have a hell of a lot of fun trying to work it out.

Around this, the film cuts rather a neat parody of teenage life in the 1980s and the 1980s Brat Pack films. Actors like Drew Barrymore and Noah Wyle have a lot of fun as closeted liberal teachers struggling in a school is run by an oppressive, fiercely religious set of governors. But not as much fun as Beth Grant as a PE cum civics teacher, both blinkered in her love of traditional education (and “safeguarding our youth” from the dangers of literature) while in love with Patrick Swayze’s smug self-help guru (whose bullshit “conquer your fear” videos and mantra are a superb spoof). The film has a nice eye for the politics of school classes, and placing this end-of-world fear into the all-consuming self-importance of teenage life works very well.

Throughout Kelly shoots with a confidence that belies his “first-time film director” status. Yes there is the occasional overly clever camera shot that you get from someone enjoying the toy set for the first time, but there is lots of terrific stuff. His assembly of events is brilliant, he works with actors very well indeed.

But the other factor that really makes the film work is Jake Gyllenhaal’s superb performance in the lead role. Gyllenhaal gets the balance between Darko’s vulnerability and his (possible) darkness absolutely spot-on. He manages to turn himself perfectly into a gangly, awkward, nervous kid – totally believable as the sort of young man unsure of where he stands in the world and angry. It feeds perfectly into the mystery of the film. Is Donnie a dangerous schizophrenic? Or is he right in thinking he might be important? Gyllenhaal captures all this, but also really makes us care for Donnie, turning him into someone truly sensitive and confused (helped as well by a very good Jena Malone as his awkward love interest). It’s a brilliantly distinctive performance that captures a true idea of teenage difficulties.

Any maybe that’s also why Donnie Darko works so well. Because it’s as much about teenage awkwardness and not knowing what you are doing here and why, as it is all the bizarre and unexplainable pseudo-science, time travel and predestination paradoxes that the film allows to play around the edges. It places at the centre of a brilliant science fiction drama, a real human and emotional story that feels very real and grounded and like something we have all experienced at one time in our lives. It’s a puzzle and mystery that also has a heart. It’s a difficult trick to pull off – so difficult Kelly has failed to pull it off again since.
Email ThisBlogThis!Share to TwitterShare to FacebookShare to Pinterest
Labels: 2001, Beth Grant, Box office bombs, Cult movies, Drew Barrymore, Jake Gyllenhaal, Jena Malone, Katherine Ross, Maggie Gyllenhaal, Mary McDonnell, Noah Wyle, Patrick Swayze, Richard Kelly, Science fiction