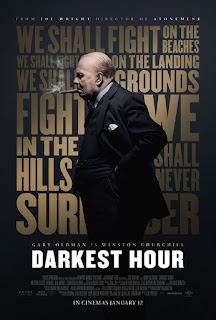 One of my favourite ever TV series is Winston Churchill: The Wilderness Years, a chronicle of Churchill’s time out of government (basically 1929-1939). It covers the political clashes between Churchill and his rivals brilliantly, as well as giving us a real feeling for Churchill’s own personality and flaws and featured a brilliant performance from Robert Hardy. Darkest Hour takes off almost where that series ends – and I think it might just be a spiritual sequel. And, for all its flaws, I might even grow too really like it.

Joe Wright’s Darkest Hour is a beautifully filmed, imaginatively shot retelling of the crucial first month of Churchill’s premiership. Wright uses a great device of flashing the date up (in an imposing screen-filling font) as each day progresses. Apart from brief moments, the action rarely leaves Whitehall, with the focus kept tightly on the politics at home. Will Churchill win over the war cabinet to continue the war, or not? It revolves around dialogue shot with tension and excitement, and is structured key Churchill speeches: each carrying all the emotional impact you could expect and beautifully performed, with goose-bump effect by Gary Oldman.

Because yes, this film’s one piece of genuine excellence, and what it is really going to be remembered for, is the brilliance of Oldman’s performance. This is one of those transformative performances where the actor disappears. Of course it’s helped by the make-up, but there is more to it than that. The voice, the mannerisms, movement, emotion – as a complete recreation of the man it’s just about perfect. Whatever the film’s flaws, Oldman nails it. Sure it’s larger than life – but so was Churchill.

Oldman’s Churchill is irascible, demanding and temperamental – but he’s also warm and humane. In one beautiful moment he conducts a conversation with an un-encouraging Roosevelt, where his features seems to shrivel and shrink with despair, while his voice keeps up the optimism. Moments of gloom hit home, but there is also humour (and Oldman is actually rather funny in the lead role). There’s moments of pain, guilt and depression – it’s terrific.

However it does mean some of the other actors scarcely get a look in. Kristin Scott Thomas in particular gets a truly thankless part, no less than four times having to counsel a depressed Churchill with variations on “You’re a difficult but great man and your whole life has been leading to this moment” speeches. Lily James actually gets a more interesting part as Churchill’s admiring secretary, getting the chance to be frightened, awed, amused and frustrated with the Prime Minister – and she does it very well, even if her part is a standard audience surrogate figure. 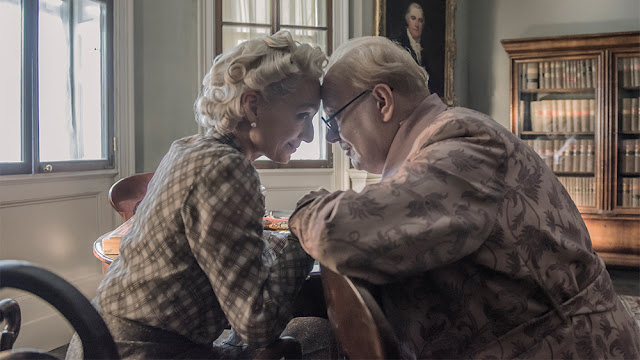 The characters are neatly divided in the film: they are either pro- or anti-Churchill. The “pro” characters largely get saddled with standing around admiringly around the great man (Samuel West gets particularly short-changed as Eden becomes Churchill’s yes man). The “anti” characters mutter in corridors about how unpredictable and dangerous he is, how he could wreck the country etc. etc.

To be fair to the film, it does at least treat the doubts of Halifax (Stephen Dillane – all clipped repression, he’s excellent) and Chamberlain (Ronald Pickup – serpentine and tactical, although Chamberlain’s hold over the Tory party was nowhere near as great as this film suggests) as legitimate concerns. It does weight the dice in favour of Churchill, and we don’t get enough time to fully understand the reasons why peace with Hitler might have seemed reasonable in 1940 (tricky to get across to a modern audience so aware of Hitler’s status as evil incarnate). But Halifax’s stance that it was better to cut your losses than fight on to destruction is at least treated sympathetically, rather than making him a spineless weasel (as others have done).

The film really comes to life with the conflict between the Halifax-Chamberlain alliance and a (largely alone) Churchill. The cabinet war room clashes have a fire, energy and sense of drama to them that a lot of the rest of the film doesn’t always have. It sometimes drags and gets lost in filling the time with “quirky” moments with Churchill. There is a bit too much domesticity that feels irrelevant when we know the fate of the nation is at stake.

But then this is a sentimental film. Not only is it in love with Churchill (we see some blemishes, but his air of perfection goes unpunctured), but it uses devices that feel as you are watching them like sentimental film devices. None more so than Churchill bunking down on a tube train to exchange encouraging words with regular people and for them to tearfully recite poetry at each other. In fact it’s a testament to Oldman that he largely gets this hopelessly fake-feeling scene working at all. 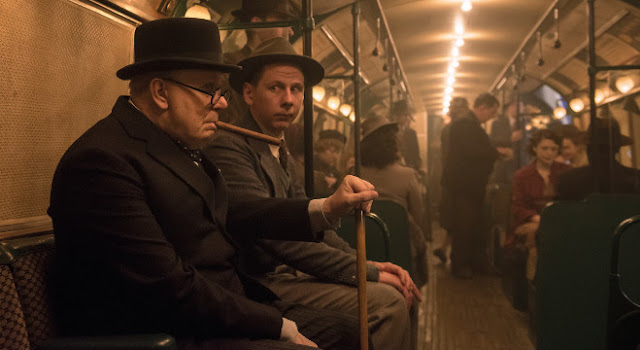 Wright’s film makes a point later of demonstrating that – reporting back to the Tory party the results of this conversation – Churchill uses the names of the people he met, but completely replaces their words with his own. But it still gets itself bogged down in this sentimentality – including a teary end caption on Churchill being voted out of office. Every scene with Churchill and Clementine has a similar chocolate box feel, as does a late scene with George VI (who seems to flip on a sixpence between pro and anti-Churchill – although Ben Mendholsen is very good in the role).

Darkest Hour is an extremely well-made film. It’s told with a lot of energy – and it has a simply brilliant lead performance. Joe Wright finds new and interesting ways to shoot things: there are some great shots which frame Churchill in strips of light surrounded by imposing darkness. But its not brilliant. It will move you – but that is largely because it recreates actual real-life, moving events (who can listen to Churchill without goosebumps?). But it’s given us one of the greatest Churchill performances and it’s worth it for that if nothing else. And, for all its flaws, and the safeness of its storytelling, I actually quite liked it – and I think I could like it more and more as I re-watch it.
Email ThisBlogThis!Share to TwitterShare to FacebookShare to Pinterest
Labels: 2017, Ben Mendelsohn, British Films, David Schofield, Gary Oldman, Joe Wright, Kristin Scott Thomas, Lily James, Political dramas, Ronald Pickup, Samuel West, Stephen Dillane, World War Two