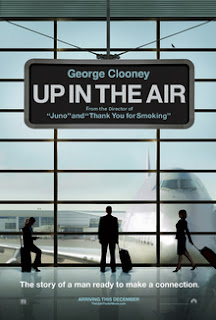 One of the worst days in your life can be the day you lose your job. The uncertainty, the insecurity, the sudden feeling of no longer knowing what the future holds – it hurts. Imagine, however, if you were the other side of the equation. What if it was your job to actually tell other people they no longer had a job?

Ryan Bingham (George Clooney) works for a Human Resources consultancy company who specialises in firing people for companies. Ryan spends his life flying from company to company across America, fires thousands of people a year, and gives motivational speeches promoting his ideology of no relationships with people or possessions. His relationships are on-the-road flirtations, in particular with one of his female counterparts Alex Goran (Vera Farmiga). However, Ryan’s world is facing threat: his company has hired young, ambitious Natalie Keener (Anna Kendrick), and wants to introduce a video conferencing system to conduct firings remotely. Ryan argues Natalie knows nothing about the ‘human element’ of his job, and she joins him on the road to find out more.

Up in the Air is a marvellous, perfectly formed, small-scale film: thought-provoking, endearing, with plenty of laughs as well as an air of bittersweet sadness. It manages to focus on all its issues and themes equally without short-changing any of them, and leaves you feeling rewarded and rich at its end. There are moments in there that will make you cry, make you laugh but also make you a little angry. Reitman never insults your intelligence though: he presents things as they are and trusts you to make the judgements you want to make. It’s quite simply wonderful, a little masterpiece of cinema.

It’s also a wonderful film of its time, which very deliberately doesn’t shy away from the brutality of the economic climate so much of its plot focuses on. Reitman used a series of talking heads of real people who really had gone through meetings exactly like this, and their emotional, very real reactions to losing their jobs gives the picture a profound depth.

Up in the Air doesn’t take the easy route of condemning Ryan’s work. Sure our sympathies are naturally with those losing their jobs, but Ryan isn’t a heartless shark. He genuinely feels he is there to support people: his principal objection to the video conferencing is it removes the human element from an extremely difficult moment in people’s lives. He has platitudes, and smooth professionalism, but also a brilliant understanding of people and he gets so close to appearing that he cares deeply about people’s lives (even if he can’t remember them days later) it’s as near as damn it to counting. Watch the scene where he fires JK Simmons’ character – he’s read Simmons’ CV, gently questions why Simmons is working anyway at a company he hates and encourages him to follow his dream of becoming a chef. Sure it’s about defusing a situation – but to Ryan it’s also about helping a person see possible future steps, if only for a moment.

It’s such a brilliant snapshot of how Ryan can analyse in seconds what might encourage a person to find greater depth in their lives, that you forget for a moment that Ryan prides himself on having nothing. His flat is a facelessly cold place, which looks less welcoming (and cheaper and colder) than the hotel rooms he stays in. He’s never happier than when in a VIP lounge. He proudly lives out of a suitcase perfectly sized to avoid checking bags. His motivational career stresses the aim of getting everything that matters to you in the world into a backpack. He has no friends, he’s a stranger to his family, no fixed abode (he spends over 320 days a year travelling). He shares a few painful minutes with people and then never sees them again.

This might just be the part Clooney was born to play: his handsome, slightly smug grin, his studied chuckles, his slight air of blankness behind his good looks are perfect for Ryan’s surface, but Clooney’s great gift as an actor is the emotional weight and depth he is able to show beneath this veneer as soon as it is scratched. He’s a marvellous physical actor – watch his growing flirtatious ease with Alex turn into a comfy affection. He understands the psychology of Ryan completely and never judges him: he can see why Ryan does what he does, and why it works for him. His performance gives Ryan the dignity of his convictions, doesn’t present with any inch of satire Ryan’s feeling that his job is partly about helping people. Even the slightest touch of distance from the part would have shattered the film’s delicate equilibrium – Clooney doesn’t do it for a second.

Of course, drama means Ryan is thrown into situations that challenge this way of thinking, not least his relationship with Alex (essentially the female version of himself). Vera Farmiga is outstanding as a woman with a very male outlook on the world. Perhaps because they share so much, their relationship grows from a sexually charged flirtation (a brilliantly shot and edited sequence in a VIP lounge) into one that increasingly becomes more and more tender. The film dangles before us and Ryan the option for a new way of life – but it doesn’t lie to us about the nature of either of these people. The relationship doesn’t develop the way we expect – and in fact it becomes a commentary in its own way on the very same future prospects Ryan spends his life selling the people he fires, that despair is a gateway to future opportunity. 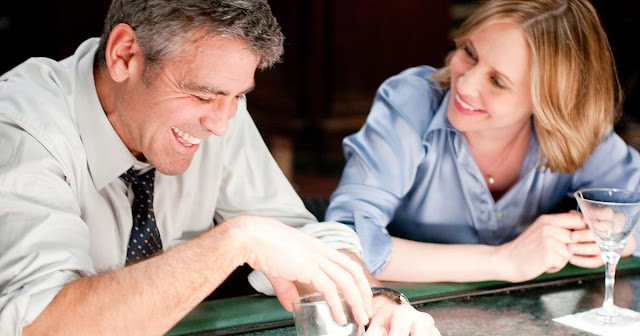 Anna Kendrick’s Natalie comes at the world of firing from our ruthless modern age – how can we do this faster, quicker and cheaper? Let’s put together a framework for all conversations, let’s do it remotely, let’s use as many buzzwords and platitudes as we can. While Ryan’s work (to him) is all about not forgetting you need to guide an actual human being through without them getting angry or upset, for Anna it’s a simple progression from A to B. Kendrick’s wonderful performance is all about unpeeling these layers. As she finds out first-hand what the job involves, so we discover she is a far more sensitive, “normal” person than we expect, someone who can’t see the logic behind Ryan’s world-view.

And the film asks Ryan to look at the logic of this world view as well. Everything he expresses at the start of the film comes under fire. Change threatens to make him as redundant as the people he fires. His growing closeness to Alex challenge his ideas about commitment (“we fall in love with pricks and are then surprised when they are pricks” Alex comments, something the film explores late on). The impending marriage of his sister – and the realisation of the complete lack of presence he has in his family’s lives – makes him start to think about the strength of his rootless existence.

But the film doesn’t hammer these points home, it juggles them all perfectly within its framework of looking at corporate America today. In a world where people are increasingly becoming faceless numbers on a spreadsheet, is it surprising so many need a faceless man to do the firing for them? Travel has made the world smaller, but also our lives smaller – like Ryan we can be everywhere and nowhere. Up in the Air is a sad and tender film, but one which leaves a kernel of hope somewhere – there are moments that make you think there are opportunities for change and rebirth. Sure it might be pulling the same trick Ryan does, but if so that’s smart – and shows what a good trick it is. Up in the Air is a hell of a movie, and Reitman is one hell of a director.
Email ThisBlogThis!Share to TwitterShare to FacebookShare to Pinterest
Labels: 2009, Amy Morton, Anna Kendrick, Comedy, Corporate Satire, Danny McBride, George Clooney, Jason Bateman, Jason Reitman, JK Simmons, Melanie Lynskey, Romantic comedy, Sam Elliott, Vera Farmiga, Zach Galifianakis