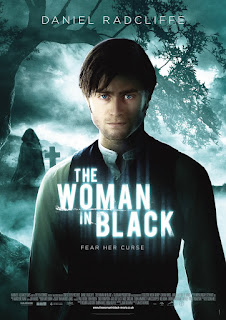 Susan Hill’s 1983 novel is a favourite modern ghost story – not surprising then, after a stage adaptation has been packing them in in the West End since 1987, that it hit cinema screens. Arthur Kipps (Daniel Radcliffe) is a widowed solicitor whose wife died giving birth to their son (now four years old). He is sent to an abandoned house in the countryside to review documents before the property is sold. The villagers nearby are hostile and wish him to leave. At the house he hears strange noises and sees a woman in black starring at him. Gradually the horrific nature of the house, and the curse on it, becomes clear.

The Woman in Black is an effective and atmospheric scare-a-thon. It feels very creepy, it looks pretty good, it makes very good use of the sort of inherent terrifying nastiness you find in porcelain dolls, music boxes, creaking chairs, chintzy wall-paper and the wind whistling through the trees. It carries a lovely air of foreboding, and the shots (where we get them) of the woman in black herself carry a great feeling of menace and maliciousness.

What is just as good though is its slim running time, because, effective as its jumps are, they are all structured in the same way. We get the haunted house late at night. We get Daniel Radcliffe walking round it slowly, breathing heavily, the camera carefully following him. We get slow camera movements around rooms until they begin to rest on an object or something appears in the corner of a frame. And then we get a crash of music and something flashes in front of the camera briefly. It’s a standard “boo” haunted house technique. Sure it’s very well pulled off indeed, and works great when it’s happening, but it’s a basic trick, using a sudden noise and distracting movement.

Its good craftsmanship to make the same surprise (basically) constantly startling – but it’s like being on a rollercoaster. You can see each dip coming time and time again. You know exactly what’s going to happen, that you going to be plummeted down. And then when it happens you still have the adrenaline, driving your fear. But will you be scared after the rollercoaster has finished? Nope.

That’s where the film’s sort of horror fails. There is nothing really lingering about this. Even when watching it late at night (as I did) it didn’t leave me unsettled five minutes after it finished. Effective horror films – The Shining – leave us with images and ideas that haunt us for years to come. This one barely lasts seconds. Compare it too, say, Blink, the classic Doctor Who episode. This comes up distant second-best. That works because it has a simple but brilliant idea (statues move!) and it has a brilliantly simple-but-very-hard-to-do way to avoid getting caught (don’t blink!). This just has things jump out at you. All the time.

This film is twice as long but has half the scares and dread of that. But all the film-makers can really think to do with this idea of a child-killing ghost is turn it into a “boo” monster. Charles Dickens’ The Signalman uses a premonition ghost like this to ominous effect – the ghost appears, that’s it. That’s all the haunting you need. Do you need the ghost moving around a house jumping out at Radcliffe? Nope. You start to feel the film-makers couldn’t think how to really extend this idea to fill a film (even one as short as 90 minutes), so needed to pad it out with no less than two extended sequences of Radcliffe creeping round a haunted house, sweating.

In the lead Daniel Radcliffe does his best but, to my eyes, seems hopelessly miscast. For starters he is manifestly far too young to be playing the father of a four-year-old child. Secondly, Arthur Kipps’ emotional trauma and depression seem to be just out of Radcliffe’s range – I’m not sure that Radcliffe is quite the actor I think of for world-weary misery. Now he does a decent job, but he neither looks nor feels quite right for the part.

The Woman in Black is a B-movie done rather well, but a B-movie and nothing more. It exists to spook you and to make you jump. But, if it aspires to anything else, it never achieves it. As soon as it is finished you’ll never feel a need to see it again – and nothing from it will stick with you even an hour later. It’s a good atmosphere piece, but that’s really all it is. It’s as far from giving you a sleepless night as it could get.
Email ThisBlogThis!Share to TwitterShare to FacebookShare to Pinterest
Labels: 2012, British Films, Ciarán Hinds, Daniel Radcliffe, Hammer horror, Horror film, James Watkins, Janet McTeer, Roger Allam