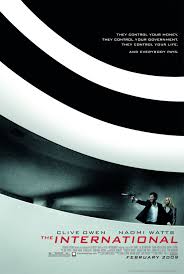 Welcome to another of my unlikely pleasures. I remember seeing The International because we took a punt on it with an Orange Wednesday 2-for-1. I had no real expectations, but I was totally wrapped up in it. It has an old-school 1970s Hollywood-conspiracy-thriller feel. I keep waiting for it to be rediscovered (I’m waiting in vain it seems). But it’s a wonderful, tense little thriller which – by focusing on the shady, morally corrupt dealings of private banks – always seems relevant. Throw in alongside that a truly stand-out action set-piece at the centre of the film and you have a much overlooked pleasure.

Louis Salinger (Clive Owen) is a scruffy Interpol agent, with a reputation for getting too involved in his cases. Working with Assistant New York DA Eleanor Whitman (Naomi Watts), Salinger is investing possible illegal arms deals involving private investment bank IBBC. After their inside contact and Whitman’s fellow DA are both murdered in quick succession, Salinger takes the battle directly to IBBC. But the bank, chaired by ruthlessly blank businessman Jonas Skarsson (Ulrich Thomsen), is prepared to go to increasingly violent lengths to protect its interests, with assassinations arranged by its in-house security expert ex-Stasi agent Wilhelm Wexler (Armin Mueller-Stahl) and carried out by his mysterious Consultant (Brian F. O’Byrne).

Tom Twyker shoots the film in cool grays and drained out colours, giving it a very cold palette fitting for its exploration of the ruthless viciousness of big business. Twyker uses the cold, modern architecture of the various businesses the film is set in to great effect, making a wonderful, imposing backdrop. The camera constantly allows this domineering modern architecture to fill the frame, and mixes it up with some well-chosen aerial shots that reduces the action to cogs in a machine. It’s a very distinctive visual film – and it’s not until it finishes that you realise (apart from blood) you’ve really seen a red, a green or a purple in the whole film. There’s no jittery editing or hand-held camerawork – it’s got a smooth old-school cinematic quality to it.

The plot is a chilling conspiracy thriller, that (within the confines of a Hollywood action thriller) gets really in-deep into the workings of big finance. Critics accused it of being a light-weight Jason Bourne but really it’s more of a colder Parallax View. It largely eschews action in favour of paranoia, investigation and simmering tension. It’s a well-constructed journey down the rabbit hole, as Salinger gets both closer towards answers, and further away from bringing anyone to justice.

Clive Owen’s rumpled performance is perfect. Far from being a “Bond audition”, Salinger is an outsider, a man who lives for his job, who wears his heart on his sleeve, and spends large chunks of the film either terrified or out-of-his-depth. Practically the first thing that happens to him is being knocked out by the wing-mirror of a truck. His grubby, unshaven scruffiness doesn’t recover from that. Owen gives the performance both a moral conviction and a slight air of desperation and bewilderment, as if he can’t quite understand why others aren’t as wrapped up in his case as he is.

He’s part of a great cast of actors – the film is full of unusual choices and rewarding cameos. Armin Mueller-Stahl mastered playing these world-weary ex-spies years ago, but delivers here. Broadway star Brian F O’Byrne is great, as a ruthlessly efficient hitman. Ulrich Thomsen is rather good as the blank businessman and family man, who seems to see no moral issues in the conduct of his bank’s business. Interesting actors like Patrick Baladi, James Rebhorn, Luca Barbaeschi, Haluk Bilginer and Lucian Msamati round out the cast with terrific cameos – there is always a unique actor and dynamic performance around every corner.

The plot of the film doesn’t unfold the way you expect it to – and mixes hope with a nihilistic powerlessness. Twyker’s directing is professional and he adds a lot of intelligence to a standard Hollywood set-up. He also throws in a few moments where the film pauses to reassess things we’ve seen before or to allow Salinger to puzzle out another crucial clue.

And it’s fitting for a film so in love with overwhelming power of modernist architecture that its most explosive sequence takes place in New York’s Guggenheim museum. This is a gut-wrenchingly exciting, destructive gun battle that serves as the pivot point. Brilliantly shot and edited, and perfectly built towards, it explodes into the film and grabs your attention. Owen again is perfect for this sequence – determined, but terrified and completely out of his depth – and Twyker’s use of the Guggenheim is masterful. Honestly it’s one of the best shoot-out scenes I’ve ever seen in a movie: five minutes of brilliance. You’d remember the film for that scene alone, if for nothing else.

Okay it’s not a perfect film by any stretch. Poor Naomi Watts has a thankless, ill-formed part. I’m pleased the film doesn’t include any romantic connection between the two characters at all, but (despite her work on the case) Whitman seems more a plot device than a character. The script largely fails to serve up too many memorable lines – and its main strengths are to present familiar actions and events in a fresh manner. Some have found the plot momentum to often flag – and there is something to that – and the overall schemes of the bank are not always completely clear.

But, nevertheless, I really like The International. It’s got a classic old-school feel to it. Its views on the immorality of big business feel very true, as does its presentation of the villain as basically a monolithic institution – the actual guys running the bank seem irrelevant, it’s just the ongoing nature of business. And in this world of corporations, where destroying a few men don’t admit to a hill of beans, how can truth and justice ever win out? Even if it had nothing else, tackling that idea makes The International feel like something new and worth revisiting. Well that, and that Guggenheim gun fight…
Email ThisBlogThis!Share to TwitterShare to FacebookShare to Pinterest
Labels: 2009, Action Films, Armin Mueller-Stahl, Ben Whishaw, Brian F O'Byrne, Clive Owen, James Rebhorn, Naomi Watts, Thrillers, Tom Twyker, Ulrich Thomsen