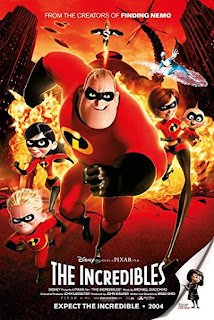 In a world awash with superheroes, what if they were suddenly found legally responsible for all the destruction and chaos that surrounds their battles to save the world? If it suddenly became illegal to be a superhero? That’s exactly the world that spins out in The Incredibles: one where secret identities aren’t just a matter of choice, they are legally enforced by a government?

After all superheroes are banned, because clearing up the legal after-effects of the heroics is just too damn expensive, they retire into “ordinary life”. Fifteen years later, Bob Parr aka Mr Incredible (Craig T Nelson), is working in a dead-end job for a tight-fisted insurance company, whose values are the antithesis of his own, and moonlights, doing small superhero acts where he can. Meanwhile his wife Helen aka Elastigirl (Holly Hunter) raises their children, who have their own super-powers. One day Bob is contacted by a secret government agency to re-start his superhero work, and he jumps at the chance – but quickly finds he’s in over his head.

The Incredibles is pretty much a perfect film. I think it might just be one of the finest films Pixar has produced (and that is saying a lot). It’s not just a brilliant family comedy, it’s also a superb action adventure. In fact, its super-hero action is so well done, it trumps nearly any live-action film you can think of. Brad Bird pulls it together with aplomb and gives the film its own brilliantly distinctive visual style, a jazzy 1960s look with cool angles and heightened reality backgrounds. It’s terrific. And it’s really, really funny.

Just the very idea of superheroes being sued is funny. A series of newspaper headlines early in the film covers everything from train crash survivors suing for trauma, to a hero with x-ray vision being accused of being a peeping tom. From there the film has huge fun with superhero tropes –it’s just inherently funny to see these god-like heroes going through the tedious 9-to-5 and school runs the rest of us need to put up with. Throw in plenty of hilarious sight gags, plus some brilliant comic diversions (not least a brilliant monologue on cape-based disasters, that really pays off at the film’s end) and you’ll not stop laughing even after umpteen viewings.

It also balances all the humour and super-heroics with very real-world problems. It’s an animated family comedy that looks at the impact of a male mid-life crisis on family dynamics, and the impact that a distant, disengaged father can have on his children. Not the usual Disney content is it? Bob Parr is a frustrated, bored man, who feels trapped by missing the excitement and drama of his youth. He wants to recapture his glory days, but is overwhelmingly worried about whether, frankly, he’s up to it any more. He’s overweight, out of shape and past his best.

It’s also funny that Bob’s midlife crisis expresses itself in listening to police scanners, and roping best friend Lucius (a put-upon Samuel L Jackson) into carrying out acts of derring-do on the sly. “Just for once, can’t we just go bowling” Lucius complains. Not that it stops Lucius from throwing down later on in the action (after a brilliant “Where’s my super suit?” argument with his wife).

Poor Bob. Compared to Helen’s intelligent resolve and strength of mind, he’s also emotionally under-developed and unable to articulate his feelings. If you’d like to criticise the film you could say that it falls very much into the standard clichéd family structure (father is the breadwinner who feels trapped, mother is at home being a domestic hero), but the film gets past it because it always pulls itself up when it feels like its heading that way – even if it needs someone like Edna Mode to literally slap Elastigirl around the face and tell her to pull herself together.

And you have to give a pass to a film that has such empathy for its characters, not least the two kids. A cripplingly shy, moody teenage girl whose power to become invisible – no wonder she’s too shy to talk to boys. A hyperactive boy, whose power expresses itself in raw speed. These two kids feel really real, and the relationship (and loving rivalry with each other) really works. It’s clear the family bonds between the four are very strong.

Those battles are quite something by the way. Helped a great deal by Michael Giacciano’s terrific score – inspired by half a dozen 1960s and 70s spy and action franchises – these scenes are dynamic and electric. Brad Bird shoots the film like a real action film, and packs it with some brilliant humour. This is easily the most thrilling children’s animated film you’ll never see. Its action is a mixture of pure Bond and superhero thrills. And while some scenes are just plain grippingly cool to watch – is it a surpise that Syndrome geeks out? – others are a perfect balance between drama and action. A sequence with Helen piloting a jet, targeted by missiles, demanding Violet create a forcefield around the jet, and then desperately making a shield around the children using her own body is both stirring and moving (who can’t empathise with a child who feels they have let their parent down?).

The film also has an imaginative and fun spin on the standard super-villain in Syndrome and a decent mystery thriller that unfolds especially well over the film. Throw in plenty of small moments – many of them supplied by Brad Bird’s brilliantly voiced cameo as costume designer Enda Mode – and you’ve got a gem for all ages. The entire cast is excellent - Craig T Nelson and Holly Hunter in particular are superb. The Incredibles ticks so many boxes I hardly know where to begin. Want a brilliant animation? Check. Want a hilarious superhero parody? Check. Want a family comedy? Check. Want a thrilling action film? Check. This film delivers on so many levels it should have a PhD. It’s simply sublime film making and story-telling. It’s hard to beat.
Email ThisBlogThis!Share to TwitterShare to FacebookShare to Pinterest
Labels: 2004, Action Films, Brad Bird, Craig T Nelson, Holly Hunter, Jason Lee, Pixar, Samuel L. Jackson, Superhero, Walt Disney