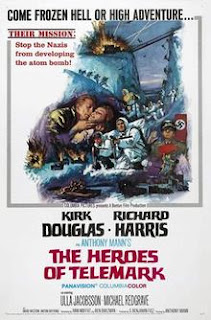 During the Second World War, Telemark in Norway was the main production factory for Heavy Water, a key component for the German nuclear programme. Norwegian commandoes were ordered to destroy the factory, which they did with a cunning plan. This film dramatizes the story – adding more guns and violence – but does at least make the lead characters Norwegian. Knut Straud (Richard Harris) is the leader of the resistance, Rolf Pedersen (Kirk Douglas) the professor who identifies what the factory is churning out. Parachuted back into Norway after secretly travelling to Britain to discuss issues with the allies, they start to plan a raid.

The Heroes of Telemark is sub-par boys-own action stuff, a sort of cross between Where Eagles Dare and The Guns of Navarone but nowhere near as good as either. Despite being crammed with derring-do, it’s strangely unmemorable, and although the stakes are really high, you never feel like you care. Everything in the film, bizarrely, feels a little bit easy. Our heroes are not particularly challenged (Nazi bigwig Terboven even berates his guards at the base for letting our heroes walk in and blow up the factory all while wearing British uniforms) but there isn’t any real price paid. The only heroes who bite the bullet are so heavily signposted for death, you actually spend most the film waiting for them to cop it.

Part of the problem is both Kirk Douglas and Richard Harris feel miscast in the lead roles. It’s also pretty clear (alleged) on-set tensions carried across into shooting – not only do the two characters not really seem to like each other, you don’t get any feeling of a growing bond between them as the film goes on. You end up not really caring about either of them – and since virtually everyone else on the team is hardly defined at all as a human being, that’s quite a big loss.

Douglas plays a bizarre professor of physics whose character varies wildly from scene to scene depending on the plot. Introduced making out with a student in a dark room, Pedersen initially denounces the boys-own heroics of the resistance. No sooner is a gun placed in his hand though, than he starts turning into a regular “ends justify the means” superman. Marry his new-found ruthlessness with his regular horn-dog attitude to women, and he’s a hard guy to like. I’m not sure a hero today would climb into bed with his estranged wife (a glamourous and pretty good Ulla Jaconssen) and then get shirty when she fails to put out. The part feels like an anti-hero role, reworked to give the Hollywood mega-star some action.

Richard Harris is similarly out-of-place as Knut Straud (a character based on the real commando who carried out the raid). He spends the whole film looking sullen and furious – he’s going for intense devotion to duty, but instead he looks like the whole thing is a tedious chore. Harris isn’t really anyone’s idea of an action star, and he’s an odd choice for the film altogether. For different reasons, just like Douglas, his stubborn touchiness makes him hard to like.

Following these rather disengaging figures means the derring-do constantly falls flat. It doesn’t help that Anthony Mann’s direction lacks thrust, drive and energy and never really gets the pulse going. Even during the most daring commando sequences, it never feels particularly thrilling. It’s a very easy film to drift away from, never managing to be as taut or tight as it should. The world-shattering stakes of the German nuclear programme are never clearly explained, or kept at the forefront. Chuck in some rather obvious doubles work (no way is Douglas that good a skier) and a few wonky model shots (the boulder Harris and co roll down the hill to try and take out Terboven’s car is all too clearly made of papier mache) and you’ve got a film that never gets going.

It also lacks an antagonist. Eric Porter has a couple of decent scenes here and there as Reichskommisar for Norway Josef Terboven, but he disappears from the film for ages. The Nazis end up as a faceless bunch of German soldiers, and are so easily overcome or fooled that they hardly count as challenges. As such, the clashes and arguments really come within the commando organisation itself, but since Harris and Douglas so clearly don’t like each other, even their brief reconciliation doesn’t ring that true.

The Heroes of Telemark will pass the time on a bank holiday afternoon. You get some decent performances – Roy Dotrice is very good as a possible quisling – and the odd good scene (Redgrave gets a good death scene) but it never really comes to life like it should. Mann’s direction is too plodding, and the pacing of the film so slack that it never becomes exciting or engaging. There are so many better movies on a similar theme you could be watching.
Email ThisBlogThis!Share to TwitterShare to FacebookShare to Pinterest
Labels: 1965, Anthony Mann, Anton Diffring, British Films, David Weston, Eric Porter, Kirk Douglas, Michael Redgrave, Richard Harris, Roy Dotrice, Ulla Jacobsson, War film, World War Two