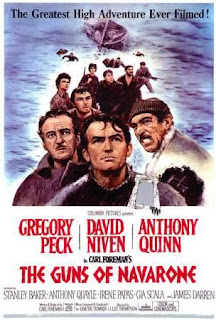 The Guns of Navarone is the archetypical “men on a mission” classic – it was the first major film to feature a team of specialists, all played by famous actors, going behind the lines to carry out some impossible task, leaving a trail of explosions and dead Nazis in their wake. Guns of Navarone was lavished with box-office success – and Oscar nominations, surprisingly – and although it’s a little too long, and a little weakly paced at times (as Thompson himself has admitted) it’s still got a cracking, bank holiday afternoon enjoyability about it. It’s not perfect, but honestly who could resist it?

In 1943, 2,000 British soldiers are stranded on the Greek island of Kheros. The Royal Navy plans to rescue them – but the way is blocked by two massive, radar controlled guns, in an impenetrable mountain base. The air force can’t take it out: so it’s up to Commando leader Major Roy Franklin (Anthony Quayle) to put together a team to do it. Recruiting mountaineer-turned-intelligence-agent Keith Mallory (Gregory Peck), explosives expert Miller (David Niven) and Greek-resistance leader Andrea Stavrou (who else but Anthony Quinn?), Franklin leads the team in. But when he is injured, the ruthless Mallory takes command – and leads the team in a perilous behind-the-lines raid.

I’d not seen Guns of the Navarone for a few years, and I’d forgotten what a brilliantly fun, boys-own-adventure thriller it is. I’d also forgotten what a lot of time is given early on into establishing what a team of bad-asses this group are. There seems to be no limit to their ruthless, knife wielding, gun running, cold-eyed killer bravery. And they hired a hell of a cast to play it as well – so damn good that you completely forget Peck, Niven, Quayle and Quinn are all just a little bit too over-the-hill for the derring-do they are called on to carry out.

Guns of Navarone brilliantly explains the mission aims, all the stakes and introduces each of the characters and their basic backstory, before the film basically gives us a series of action set-pieces – on a boat, at the coast, on a cliff, in a village, in a German cell, in Greek ruins, in a German base. It covers everything, and each scene is directed with real verve and increasing tension, with a simplicity to camera-work and editing that really lets the action breathe. The final sequence, waiting for the booby trap to explode among the guns, is a brilliantly done “rule of three” waiting game, with the tension building up each time. 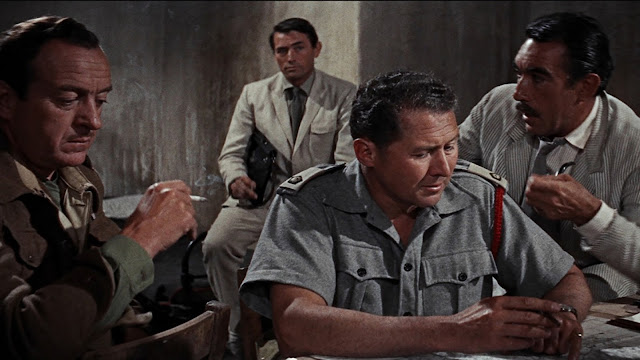 The film is also rattling good fun, and gives each of its actors’ set-piece moments. Gregory Peck grounds the film perfectly as the increasingly ruthless Mallory, willing to sacrifice a number of pawns to achieve the target, but has a war weariness that still makes him sympathetic (as a side note, Peck’s German accent was so woeful all his German was dubbed). Niven plays Miller as a mixture of louche whiner, chippy middle-class man and natural-born troublemaker – and gets some knock-out speeches on the morality of war (Niven by the way nearly died after catching pneumonia during the boat wreck sequence).

Anthony Quinn had a monopoly on playing exotic roles at the time – from Mexicans to Arabs, from Gaugain to Zorba the Greek – so no great surprise he plays the Greek colonel here. He’s terrific though, a cold-eyed ruthless killer – and the sequence where he pretends to be a cowardly awkward fisherman is wonderful (not least for Stavrou’s reaction to Miller’s praise for his performance – a half shrug and a “so-so” hand gesture, one of my favourite ever “character” touches in the movies). Irene Papas is perfect as his female equivalent, while Anthony Quayle puts together another of his “decent army officer chaps” as boys-own adventurer Franklin. Baker and Darren don’t get huge amounts to do, but Baker does well with a “lost my taste for this killing malarkey” sub-plot.

Many of the character beats were so well-done they basically became archetypes for every “group on a mission” film since (the austere leader, the difficult whiner, the old-school traditionalist, the ruthless warrior, the maverick, the one who’s lost his nerve – and, uh, I guess James Darren is the “sexy” one). The actors play off each other superbly. There are also some great cameos – Robertson Justice is great as “the man in charge”, Walter Gotell very good as an archetypical “worthy adversary” German – there is even a slightly bizarre cameo from Richard Harris as an Aussie pilot (yup you read that right). 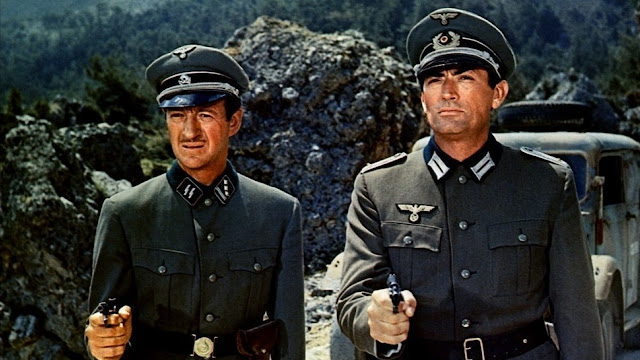 Navarone’s pace doesn’t always quite work – the gaps between the action sequences do lag. It takes nearly 45 minutes for our heroes to even get to Navarone. The film also can’t quite decide its stance on warfare. We get Miller’s passionate speeches on the pointlessness of missions when wars are always going to happen anyway. The unmasking of a traitor leads to a long debate on the morality of killing them or not. Several of the characters question the point and morality of war. But then, the film spends plenty of time on Alistair MacLean thriller beats: there is killing-a-plenty of German soldiers, gunned down with ruthless efficiency (not quite as many as Where Eagles Dare but pretty close!). There are small references to Greek villages paying a heavy price in retribution for the gang’s action – but these considerations never even slow them down, or make them stop to think.

Not that it really matters – this is a boy’s own action film, full of hard-as-nails actors grimly “doing what a man’s gotta do” throughout. And, despite being a little too long and aiming for a depth it doesn’t always follow through on, it’s brilliantly assembled, the action sequences are tightly directed, and the acting has a square-jawed confidence to it. Niven is pretty much perfect as the slightly dishevelled Miller, and the clashing relationship between him and Peck growing into respect, has fine bromance to it. Navarone is the first of its kind, and it’s still (and always will be) one of the best – really exciting, really thrilling, really damn good fun.
Email ThisBlogThis!Share to TwitterShare to FacebookShare to Pinterest
Labels: 1961, Action Films, Anthony Quayle, Anthony Quinn, Bryan Forbes, David Niven, Gia Scala, Gregory Peck, Irene Papas, J. Lee Thompson, James Robertson Justice, Richard Harris, Stanley Baker, War film, World War Two