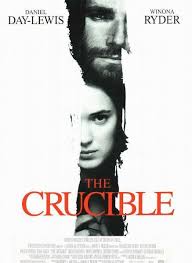 The Crucible is now so well-known, it’s virtually a shared cultural reference point. Surely we have all studied it at some point at school, or seen it on stage (or both). The play helped “witch trial” become a common short-hand for an increasingly vicious campaign conducted by society against a group within it. The Crucible works so effectively as a play because it is both simultaneously a brilliant recreation of the time it is staging, and a play of universal themes which is for all time.

In Salem, Massachusetts in 1692, the young girls of the village are caught dancing around a fire in the woods late at night by Reverend Paris (Bruce Davison). The next day, some of the girls will not awaken from fits, and rumours of witchcraft spread. Terrified of the blame being pinned on her, the girls’ ring-leader Abigail Willams (Winona Ryder) “confesses” to being tempted by the devil and swiftly accuses other people in the village (often at the prompting of senior villagers keen to remove rivals and resolve old feuds). However, Abigail’s real target is Elizabeth Proctor (Joan Allen), the wife of Abigail’s former lover John Proctor (Daniel Day-Lewis). The accusations quickly spiral into a series of trials based on the girl’s “evidence”, conducted by Judge Thomas Danforth (Paul Scofield).

The Crucible may be one of the finest adaptations of a play ever made. With the script adapted for the film by Arthur Miller itself, the play is effectively opened out and subtly restructured (the original is essentially four acts, each a single scene in a single location) to allow different character interactions, earlier introductions, and to show us things only implied in the original play. Many will complain about the film showing us rather than allowing our imaginations to work, but the film never loses the ideas and themes of the original play and gives it a real emotional force. What the film might sacrifice in the claustrophobia of small rooms, it more than makes up for in getting across a real sense of a community consumed by hysteria.

Nicholas Hytner – in only his second movie – directs with great skill, using a number of low-angle lenses to make ceilings loom over the scene. He mixes this with sweeping shots (beautifully filmed) of the Massachusetts countryside, which looks increasingly windswept and bleak. He really understands how to play the film “straight” – to let its universality speak by grounding it in the Salem countryside, without tipping the hat. His theatrical experience works wonders for the set-piece scenes, which sizzle with tension and brilliance, with Hytner allowing moments where you can almost convince yourself everything is going to be OK. 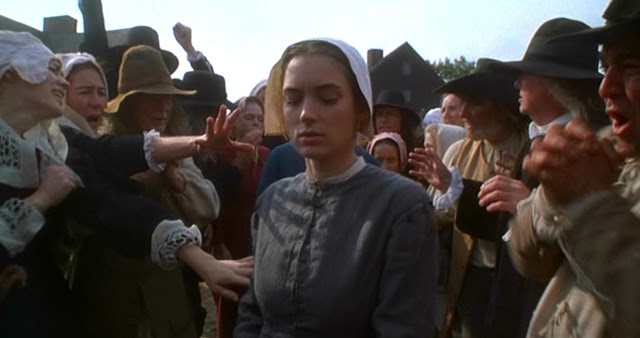 Miller’s expanded screenplay also allows an even greater sense of the hidden corruption of the trials, and how they are misappropriated by certain members of the village. Far more than even in the play, you get a real sense of old scores being settled, and of odd-balls and eccentrics being targeted. Frances Conroy (pre-Six Feet Under fame) is excellent as Ann Putnam, using accusations to alleviate her own bitterness at the loss of her children, while her husband is a spittle-mouthed bully, shamelessly using the trial as a landgrab (well played by Jeffrey Jones, awkward as it is to see him in a movie – google it).

In this nightmare village of suspicion and accusation, Abigail Williams is the only person who really understands the opportunities and dangers fully. Winona Ryder is often overlooked in this film, but her brilliant expressiveness is perfect for Abigail. She really adds depth and shade to the character – yes she is bitter and angry and ruthless and shameless, but she’s also scared and genuinely in love with John, and you get flashes of doubt and even regret over what she is doing.

The object of her obsession is John Proctor. Daniel Day-Lewis – Miller’s son-in-law – takes on the role and he is of course as excellent as you might expect. Day-Lewis’ key roles are such larger-than-life landmarks in cinema, it’s easy to overlook him playing a role taken on by so many other actors. At first, you almost feel it might be a waste – but he gives it a growing emotional commitment and force. He may be the one sane man in the storm of hysteria, but Day-Lewis doesn’t lose track of Proctor’s inner cowardliness, his corruption, his bitterness. Day-Lewis’ performance repositions the role as a man who has to learn to stand for something. It’s a superb performance.

He’s equally matched by Joan Allen, whose performance as Elizabeth Proctor throbs with dignity, but also a puritan strength of faith that makes it easy to imagine that Proctor would feel overwhelmed by a sense of being weighed in the balance and found wanting. She and Day-Lewis have a beautifully played, hugely emotional scene late on in a windswept field which (like so many other scenes in this production) briefly suggests a hope for the future. 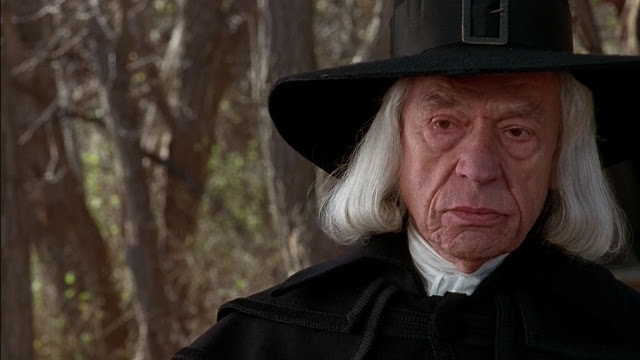 Paul Scofield did so few films that each of his rare performances is to be treasured (this was his last film performance). His Danforth is simply superb, probably close to the definitive performance. It trades a lot on an inversion of Scofield’s most famous performance as Thomas More. Scofield plays Danforth as a man filled with certainty without a trace of doubt, who is married to the word of the law but has no understanding of the spirit of it. In Scofield’s masterful performance, flashes of arrogance and pride intermix with a genuine sense of faith and morality. His Danforth is convinced everything he does is right – a position that allows him to commit many wrongs.

The film is rounded out by several other excellent roles: Bruce Davison is outstandingly weaselly as Samuel Paris, Peter Vaughan has a wily shrewdness as Giles Corey, Rob Campbell is increasingly filled with doubt and anger as Hale, Karron Graves is wonderful as a desperate and scared Mary Warren. Mary Pat Gleason is perfect as the proud Martha Corey, while George Gaynes subtly suggests a man consumed with doubt as Judge Sewell.

“Anybody seeing The Crucible now would never dream that it had been a play” said Arthur Miller on this adaptation. He’s right. This must be one of the best stage-to-screen adaptations there has ever been, with all involved totally understanding what made the play great while expanding and deepening the content for film. It’s a marvellous film.
Email ThisBlogThis!Share to TwitterShare to FacebookShare to Pinterest
Labels: 1996, Arthur Miller, Bruce Davison, Daniel Day-Lewis, Jeffrey Jones, Joan Allen, Nicholas Hytner, Paul Scofield, Peter Vaughan, Play adaptation, Rob Campbell, Winona Ryder