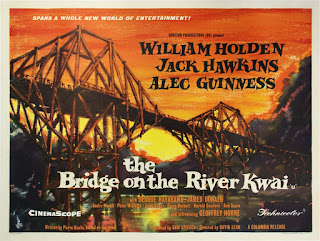 “Madness! Madness!”Are there many better final lines of films – or any delivered with more emphatic, meaningful gusto than James Donald manages at the close of this David Lean classic? The Bridge on the River Kwai is a constantly reliable, wonderfully assembled classic film, and a never-ending joy to watch. It’s not only a gripping epic, it’s also a wonderful psychological study of a series of men and the impact war has on their psyches. It’s all madness after all.

In 1943, Colonel Nicholson (Alec Guinness) and his men arrive in a Japanese prisoner of war camp in Burma. Camp Commander Colonel Saito (Sesse Hayakawa) has been tasked with building a bridge over the river Kwai, and demands officers and men go to work. When Nicholson adamantly refuses to allow officers to do manual labour (as per the Geneva Convention), he and Saito are set for a clash of wills, in which the iron-willed, rigid certainty of Nicholson eventually triumphs. However, once Nicholson is released from solitary confinement, he is so horrified by the decline in discipline of his men, he decides building the bridge is the perfect opportunity to rebuild morale and demonstrate British character=. So he sets upon building a better, stronger bridge than the Japanese had designed. Meanwhile, fellow prisoner American Commander Shears (William Holden) escapes from the camp back to Allied headquarters – only to be forced to return to the jungle on a commando raid to destroy the bridge, led by Major Warden (Jack Hawkins).

Wow this is one hell of a film. It was garlanded with seven Oscars, and totally deserves each and every one of them. Kwai is a deeply engaging, wonderfully structured epic that balances perfectly the sweep of Hollywood cinema with a keen understanding of the complexities of psychologies under pressure. Because like Clipton says, this is a film about madness. Virtually everyone in this is mad in some way. Lean brilliantly positions these psyches in a series of conflicts and clashes: we have Nicholson vs. Saito, Nicholson vs. Shears, Shears vs. Warden – in every relationship in the film there is conflict and disagreement. It makes for extraordinary drama.

Pile on top of that the fact that David Lean is a consummate film maker. Every moment of Kwai is a display of wondrous visual storytelling, from the arrival of the British in the prison camp – a triumph of defiance, pride and hubris – to the final attack on the bridge. The final sequence around the bridge is exquisitely assembled. The editing is flawless, the tension build-up (nearly 20 minutes!) never flags, but carefully establishes the who, what, why and where. The sequence itself builds up both events and problems with daunting skill. In between, every sequence of the film has some masterful work in it.

The heartbeat is Alec Guinness, simply marvellous as Nicholson. It’s hard to believe watching it that he was not the first choice – in a parallel universe Charles Laughton starred opposite Cary Grant’s Commander Shears! – because he is superb in this Oscar-winning role. Guinness’s Nicholson is mad. Not in the cuckoo way or a cruel or arrogant way. He’s blinded by the rule book, by the middle-class values of duty, order and dignity that govern his life. Mad because he takes a task from his Japanese enemies and does it better than they ever could have: “Must we work so well? Must we build them a better bridge than they could have built themselves?” Clipton asks of him. Too true. Nicholson’s response? That one day people will remember the bridge was built not by “a gang of slaves, but soldiers, British soldiers…even in captivity”.

So Nicholson doesn’t see it that way. It doesn’t match his narrow world view of a place for everything and everything in its place. Because he has no vision beyond his own immediate circumstances. The important thing for him is to build the bridge, because it’s his duty to keep his men together, and demonstrate British resolve. So it’s Nicholson who visits Clipton’s sick bay and gently questions the wounded men, encouraging them to go back to work on the bridge so it can be finished on time (they ironically march through the graveyard of the camp on the way). For Nicholson the bridge is everything – and Guinness’ eyes are full of rigid monomania (needless to say, by the end of the film Nicholson himself off-handedly informs Clipton with pride that the officers have volunteered to work on the bridge to make sure it will be finished before the deadline).

His manner contrasts fascinatingly with Sesse Hawakaya’s Colonel Saito. Saito, a bank manager type if ever you saw one, clearly struggles with holding his command together and to deliver the bridge as planned. He has the strength of office, but not the strength of character of Nicholson. Hawakaya plays a weak man – and it’s fascinating how Lean charts the shift in power from Saito to Nicholson. Nicholson stands for principle and simply cannot imagine backing down – and then, with a sense of certainty and natural authority that governs his life, swiftly takes over the entire planning of the bridge from Saito. Poor Saito is a broken, weakened man: and in his own form of madness, is left with Nicholson alone as a confidant (the two of them talk more to each other about their loneliness and uncertainties than they do anyone else – Nicholson in particular gets a marvellous speech about the sad transience of the soldier’s life - "it's a good life, but still there are times...").

The madness doesn’t stop there. Jack Hawkins’ Major Warden is as fanatical as Nicholson: the mission is everything. Hawkins is excellent, turning Warden into a sort of over-grown schoolboy, playing at soldiers but with an adolescent aggressive willingness to sacrifice the pieces for the greater good. For Warden, no life in the team is sacred (including his own), and everything must be about the target. Warden’s gung-ho, take-no-prisoners attitude, his lack of empathy for the lives of those around him, makes him as much of an insane danger as Nicholson, perhaps more so.

Holden’s more humane Shears is the counterbalance with these three lunatics. Of course, Shears is sucked even more into the madness than anyone else – who else would escape from a prison camp, only to be forced to head back into the jungle on a fool’s errand? Holden is damned impressive as the naturally anti-authoritarian Shears, a man who never seems to have seen a boss without questioning him, who recognises the insanity of the war around him but when push comes to shove throws himself into the mission he has been given.

He’s the big addition to the original source material – but it’s an idea so good that Pierre Boullé said he wished he had thought of it himself. Boullé won the screenplay Oscar, but the writers of the script were really the black-listed Michael Wilson and Carl Foreman. These two put together a superb script, and the structure contrasting Shears with Nicholson works perfectly. These two are mirror images, but never really antagonists. Their final meeting towards the end of the film has a poetic sadness about it. It adds a whole extra dimension to the film – while one storyline sees the bridge being built, a parallel one prepares for its destruction.

All these threads come together beautifully on the morning of the bridge’s opening, after a triumphant celebration by the prisoners on the completion of the bridge – a moment Nicholson describes to them as “turn[ing] defeat into victory”. He is of course both right and wrong – and the triumph of the film is that you can’t help but share Nicholson’s desire to save this bridge that we have seen so much work, effort and love go into constructing.

“Madness”. That’s how Clipton sees it – James Donald is by the way wonderful as the one sane man – and yes of course he’s right. It’s all part of what is a masterful film made by a master storyteller, beautifully filmed and edited. Alec Guinness gives a performance for the ages as stubborn, small-minded man whom we somehow still end up strangely admiring and respecting. Holden, Hawkins and Hayakara offer intelligent, engaging portrayals. The Bridge on the River Kwai is a film that you can watch again and again. In fact you should, because Lean here marries an epic scale with a story that feels small, personal and deeply felt – that places the psychology of real people at the centre of an epic stage. It’s simply a classic.
Email ThisBlogThis!Share to TwitterShare to FacebookShare to Pinterest
Labels: 1957, Alec Guinness, André Morell, Best Picture, David Lean, Jack Hawkins, James Donald, War film, William Holden, World War Two