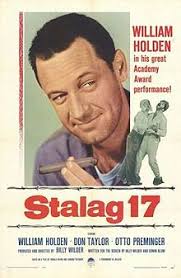 A sort of cross between The Great Escape and Colditz (but not as good as either), Stalag 17 is a relatively minor entry into Billy Wilder’s illustrious cannon: but that makes it more than good enough to be a stand-out movie in anybody else’s. Set in a German prisoner of war camp for captured American NCOs, it follows the hunt for a traitor leaking escape plans to the Germans. The suspicions of the other inmates quickly turn to camp fixer JJ Sefton (William Holden), a self-serving, cynical outsider, despite his protestations of innocence. When a saboteur and POW is betrayed to the Germans, Sefton decides he needs to locate the stool pigeon himself.

The main historical interest in Stalag 17 is William Holden’s Oscar-winning performance. Holden apparently walked out of the original Broadway production of the play, but such was his trust in Wilder’s judgement he agreed to play the substantially rewritten role. Just as well he did, as Holden’s drawling cynicism, air of bitterness and the marvellous impression he is able to give of a man of commitment and principle under the veneer of a self-serving egotist are perfect for it. Holden won the Oscar (he believed it was a consolation for his failure to win for Sunset Boulevard) – and co-incidentally gave the shortest acceptance speech ever (due to TV coverage rules), a simple “thank you.”

Holden’s character slowly dominates the narrative more and more, but is often shot on the margins of the film. Wilder shoots a film where the lead character is on the periphery of the action, with Holden on the edge of frames, or just being caught by the camera as it drifts towards him. He feels like a supporting character for a large chunk of the first half of the film, while Wilder focuses on the daily life and bonhomie of the camp: two things Sefton deliberately exiles himself from. But you keep coming back to him, and are always aware of what he is thinking and planning.

The focus on the atmosphere of the camp allows a number of fun scenes around the isolation of the men. There are joyful celebrations for Christmas (including tree decorations and a full dance in the barracks, with men eagerly grabbing each other for a whirl in a way you can’t imagine them doing back home). We get the games and in-jokes that keep them sane, the cheeking of the guards, and the obsessive interest in the women held in the Russian camp next door.

This also allows a number of colourful performances from a solid group of character actors. Robert Strauss was Oscar-nominated as the scruffy, Betty-Grable-obsessed “Animal”, and his comic antics provide much of the film’s humour. There are fine performances from Harvey Lembeck as his confidante (Lembeck and Strauss had both played the same roles in the stage production), while Peter Graves, Neville Brand and Richard Erdman contribute performances as very different POWs.

The film also deals with mob dynamics: the group turns on Sefton, it seems, because he dares to bet against an escape and, as a fixer, he has access to luxuries the rest of the group don’t have (and charges them to access). Throw in his distance and his happiness not to make friends and it’s clear why they suspect him. But that doesn’t make their brutal punishment of him (on no evidence) and their cruel ostracism any easier to watch. You can’t help suspecting that Wilder had more than half his mind on the McCarthy trials taking place at the time when he was filming this mob-justice film.

The film is also notable for making the Germans reasonably fully-formed characters. Sure, our two main characters are, to varying degrees, ruthless buffoons, but they are not vicious or cruel. Otto Preminger’s camp commandant is a puffed-up martinet who puts his boots on when calling a General merely so he can click the heels together (and immediately removes them when the call is complete). Sig Rumann’s barracks guard is a decent cove and bluff braggart, who actually runs a fairly efficient spy system with the traitor.

The film is partly a study of men under pressure and partly a mystery – obviously Sefton isn’t the traitor, and the film slowly reveals who is before an impressive sequence where we see the traitor in action planting a message. There is a noir-ish quality to this mystery element, and the film holds a balance fairly well between a war comedy and an adventure where lives really are at stake (it’s book-ended by characters being machine gunned by the Germans after all). It’s not the greatest war film ever, but it has more than enough going for it.
Email ThisBlogThis!Share to TwitterShare to FacebookShare to Pinterest
Labels: 1953, Billy Wilder, Don Taylor, Harvey Lembeck, Otto Preminger, Peter Graves, Prison Camp, Robert Strauss, Sig Rumann, William Holden, World War Two