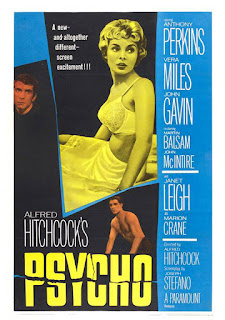 Psycho is so famous it’s almost impossible to watch it as Hitchcock intended. When it was released, the old showman made a huge amount of play from literally banning people from entering the cinema after it had started, with huge billboards in theatres urging people on no account to tell anyone what happens. It was the first major anti-spoiler campaign – and it worked a treat, because the film became a sensation. Such a sensation, that I don’t think there can be many people alive who aren’t familiar with the basic intricacies of its plot, whether you’ve seen it not.

Marion Crane (Janet Leigh) steals $40,000 from her employer, in order to marry her love Sam Loomis (John Gavin). Fleeing New York, she drives through two nights, changes her car, frets about being caught – and finally rests for the night at the Bates Motel, run by shy Mummy’s-boy (“A mother is a boy’s best friend!”) Norman Bates (Anthony Perkins). Exhausted by two days of stress, Marian thinks it’s time to have a shower – and so we suddenly switch genres completely….

Psycho is a masterpiece of mis-direction. If you didn’t know what the film was about, you would expect, from the first act, you are in for some sort of mix between Double Indemnity and a documentary true-crime thriller. The entire first act is essentially a brilliant Hitchcock MacGuffin – both the money and Marion Crane turn out to be things of immense importance to the characters, but essentially less so to the audience. Hitchcock pulls one of his best con tricks by presenting Janet Leigh as the main character, only to dispatch her brutally less than halfway through the film.

Which is of course during one of the most famous scenes in film history: the shower scene. It’s a masterclass of unsettling, suggestive editing, disturbing imagery (you never see the knife plunging into flesh, but you certainly feel like you do, with constant cuts from knife, to body, to movement, to blood in the bathtub – but no links between them on screen), and of course Bernard Herrmann’s jagged strings scoring it all. For no other reason, this scene would cement the film in cinema history. It’s a slasher scene filmed by a master of cinema, a clear and simple statement for everyone else to come that this was how it was done – and no other director of slasher horror has come anywhere near Hitchcock’s skill here. It’s a phenomenal, terrifying, powerful piece of cinema.

It works so well because Marion Crane is not a faceless victim. Unwittingly, we’ve carefully followed her through the last few days of her life. We’ve seen her love affair with Loomis, we’ve felt her despair at their only being able to meet in motels, felt her temptation and then shared her paranoia and anxiety as she flees with the money. Leigh is barely off-screen for the entire opening third of the movie – and we’ve completely invested in her by the time the water is flowing. Leigh is excellent as Crane – and an overlooked coda to the shower scene is Hitchcock’s tight closeup on her eye immediately after the attack – Leigh pulls off the hugely difficult trick of letting her eye seem like the life is fading away from her in that second.

It’s one of many outstanding directing feats in the film. Hitchcock slowly builds the uneasy atmosphere of the Bates motel from the moment Marian arrives there, using increasingly unsettling, gothic angles to capture Norman and to suggest that all is not what it seems. As our characters explore the Bates motel, jump cuts to innocuous objects make them carry great peril and uncertainty. Everything at the Bates motel is unnerving, unusual and every shot is not quite right. The Bates motel itself looks like the most nightmarish gothic mansion (seriously who would want to stay there?!).

The identity of the murderer is pretty well known. Anthony Perkins is twitchy and fidgety, a softly-spoken peeping tom who is unable to meet anybody’s eyes and is obsessed with taxidermy – is it any great surprise? Perkins is perfect as Bates, and Hitchcock expertly inverts his boyish good looks to masterful effect. Could someone so shy, quiet and innocent-looking be a killer? As the final scenes show us mother’s disturbed voice in Bates’ mind (while the camera slowly tracks in on his increasingly unhinged, grinning face) we not only get some more Hitchcock tricks (a subliminal imposing of the mother’s decayed face over Bates) but also another wonderful scene, of iconic acting and simple but powerful camera work. Hitchcock could do it all. 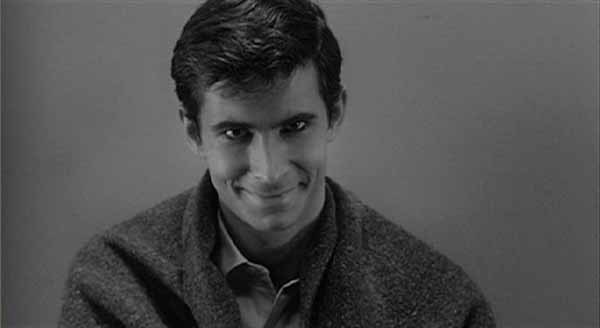 Mother – oh yuck. It’s brilliant misdirection again. Who is mother? Where is she? Who is the woman we keep seeing? Who is the female murderer? Even when we are told categorically that mother died years ago, that information itself is immediately questioned (“If she wasn’t buried then who was?”). When we do find the truth it’s another horror moment – the greatest ever turn-the-body-around-to-see-the-horror moment you’re going to see in the movies. Lila’s scream and raised arms knock a lightbulb, which swings casting alarming light and shade over the scene.

So Psycho is a masterpiece of film, because it is such an unsettling clash of genres. It’s a film noir whose main character accidentally stumbles into a slasher film. Investigating the disappearance of Marion, Loomis and her sister Lila keep returning again and again to the money that has gone missing, assuming it is the motive of the crime – but they couldn’t be more wrong.

As is explained to them at the end by the film’s psychiatrist character. This is the weakest mis-step in the film: a psychiatrist explains in a dull lecture exactly what has happened, what was wrong with Norman blah-blah-blah. Maybe we are just much more familiar with things like that, but this scene surely always had a “let me tell you all the answers” flatness to it. Sam Loomis and Lila Crane are not exactly the most interesting characters you are ever going to see – Loomis in particularly seems at first he is going to be a slight rogue, but the character quickly settles into being a bore (what does Marion see in him?). After the first 45 minutes have gone by, most of the scenes outside of the Bates Motel are (whisper it) dull – probably because they focus on a lot of discussion about the money, an issue the audience has long since lost interest in. Did Hitchcock deliberately make these scenes flatter, knowing we needed the rest from the horrors of the Bates Motel?

Psycho, though, is a classic and it will always be a classic. A slasher film and psycho-thriller, directed by an absolute master filmmaker at the top of his game. When Hitchcock made this film – on a low budget, using a TV crew, in black-and-white – people wondered why he was slumming it, why he was wasting his talent. They weren’t asking that after the film was released. Psycho is one of his purest, most unsettling thrill-rides, as horrifying, compelling and unsettling now as it was when it was first released.
Email ThisBlogThis!Share to TwitterShare to FacebookShare to Pinterest
Labels: 1960, Alfred Hitchcock, Anthony Perkins, Horror film, Janet Leigh, John Gavin, Martin Balsam, Murder mystery, Slasher film, Vera Miles