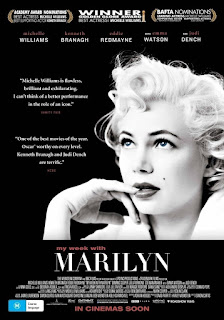 In 1956 Laurence Olivier was the greatest actor in the world; Marilyn Monroe was the biggest star (and sex-symbol) in the world. Surely when they came together to make a movie, it would be cinema gold. It wasn’t. Olivier directed and starred with Monroe in The Prince and the Showgirl, an almost impossibly slight puff piece, partly assembled (so rumour goes) so Olivier could sleep with Monroe. But it turned out Monroe’s fragile psyche and Stanislavkian approach to acting was incompatible with Olivier’s well-honed craft. The two did not get on.

Simon Curtis’ gentle, at times charming, but basically very lightweight film follows the making of the film through the eyes of Colin Clark. Clark, son of the famous art critic Kenneth Clark, was a naïve, romantic young man keen for a career in the movies through his father’s contacts. Hired by Olivier’s production company, Clark is tasked to take care of Monroe throughout the film. He becomes increasingly fascinated and infatuated with her as they spend more and more time together.

The film is based on Clark’s diaries, and he is played by Eddie Redmayne at his most fresh-faced. The problem with Clark is that, to be honest, rather than a young man on a journey of self-discovery, he comes across a little like a social-climbing creep and borderline stalker. Clark recounts a short-lived friendship that obviously had huge importance to him – but the film doesn’t want to deal with the fact it probably meant virtually nothing to Monroe, beyond some company during a lonely time.

It’s not helped by the fact Clark comes across slightly like a pushy groupie, the self-proclaimed guardian of Monroe’s needs – qualifications barely justified by his actions. The film wants us to think he got closer to the magic of celebrity than anyone, but he feels like a stranger with his nose a little closer to the portcullis. Quite frankly, Colin is the least interesting character in his own story, and Redmayne fails to really give him much depth for us to engage with. Instead he remains a slightly unsettling inverted snob, manipulated by Monroe. The film, you feel, just doesn’t get this. At the end someone tells Colin he is “standing taller” than when he first met him (the implication being the relationship has made a man of him – as if spending a bit of downtime with a celebrity was the only route to emotional maturity). But rather than being part of a sweet star-crossed romance, Colin feels like someone creepily attaching himself to someone vulnerable.

However, Michelle Williams is very good as Marilyn, capturing a real sense of her emptiness and insecurity. She perfectly captures Monroe’s physicality and vocal mannerisms. She is very good at capturing Monroe’s sense of permanent performance, of her glamour, kindness and innocence, mixed with her maddening vulnerability and (inadvertent?) selfishness. It’s a fine performance – better than the film deserves.

Because the film is afraid of remotely criticising Monroe at all – or really engaging with the deep psychological reasons for her depression, or addressing the possibility that part of her appeal was her slight blankness that any desires could be projected onto. Instead, the film suggests, she’s sad because men just use her. Apart from Colin of course. His kissing, skinny-dipping and sharing a bed with her are entirely unmotivated by any lustful yearnings.

The film is in love with Monroe, presenting her just as Colin saw her – perfection. In fact, just as Dougray Scott’s put-upon Arthur Miller says, she was probably exhausting and all-consuming. She certainly sucks the naïve Colin into her orbit, in a way he (or the film) hardly notices or understands. It wants us to think of this as a romance – in fact, Monroe’s fragility created a neediness that meant she didn’t feel she needed to consider other people, so overwhelmingly concerned was she with her own brittleness. The film essentially believes she was a star, so is basically allowed to do what she wants. The fact that she did so with an air of gentle vulnerability means the film gives everything she does a pass. 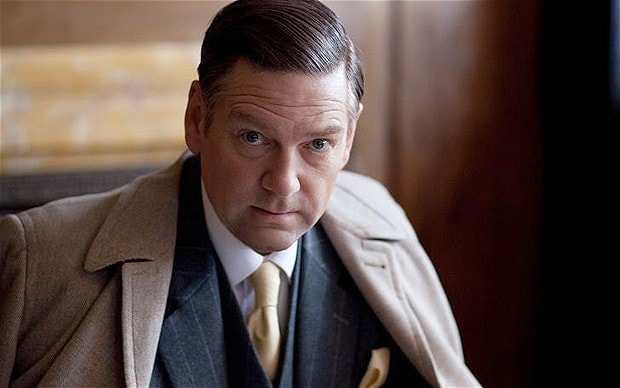 So it’s rather hard not to sympathise with Olivier’s growing frustration with Monroe’s unreliability. Kenneth Branagh triumphs as Olivier, surely the role he was born to play: very funny, but also with a patrician charm and all-consuming arrogance. Branagh taps into Olivier’s vulnerability, his sense that he may not be able to communicate his acting strength into movie stardom, that he is yesterday’s man. For all her difficulty, Monroe had that “star quality” that makes her the centre of your attention. I’d argue Olivier almost certainly had the same – but the film is so in love with Monroe, it needs to slightly bring Olivier down. Branagh, however, is so good that he constantly punctures the film’s attempt to force Olivier into a less sympathetic role than the one it indulges Monroe with.

My Week with Marilyn is far from terrible – it’s just a rather empty film. It has a terrific cast with these British star actors all offering fine pen portraits of assorted actors, producers and agents. The film however is slight, and so in love with its fairy-tale elements, it doesn’t notice that Clark’s story is slightly more creepy and certainly a lot more emotionally empty than the film wants it to be. It wants to take us behind the curtain of a 20th-century icon – instead it accidentally shows how impenetrable their screens are, and how easy it is for ordinary people to persuade themselves that the most fleeting of contacts was something special.
Email ThisBlogThis!Share to TwitterShare to FacebookShare to Pinterest
Labels: 2011, Derek Jacobi, Dominic Cooper, Dougray Scott, Eddie Redmayne, Emma Watson, Films about film, Judi Dench, Julia Ormond, Kenneth Branagh, Michelle Williams, Simon Curtis, Toby Jones, Zoe Wanamaker