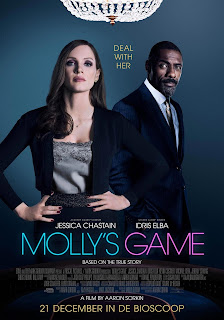 Molly Bloom (Jessica Chastain) is all set to join America’s Winter Olympics team, under the guidance of her ultra-demanding psychiatrist father Larry (Kevin Costner), when a freak accident ends her career. So she heads to LA and becomes embroiled in the world of high-stakes poker, eventually setting up and running her own high stakes games in LA and New York, earning millions. But, over a decade later (in a parallel plotline) she has had a millions seized and is battling against imprisonment for her connections to the mob, with only lawyer Charlie Jaffrey (Idris Elba) on her side.

Sorkin’s zippy new drama has plenty of sparkling dialogue – as you could expect! Sure this film probably also proves he’s not really a director (it’s over-long, a little flabby, and structurally not very clean) but the guy can certainly put a speech together. My main issue with Molly’s Game is I’m just not quite sure what its point is. Maybe it only exists to entertain, but it feels like it wants to put together a touching story about family, faith and the value of your word. I’m not sure it really manages to achieve any of this.

The parallel plotlines don’t always do the film a lot of favours. The present-day plotline of Molly and Jaffey working to clear her from the various charges she has been accused of, continually hints at some serious gangsterism set-ups later on: largely these never really transpire. Actually, the film heads into pretty standard “my-Daddy-didn’t-love-me” territory. It shy’s away from being something different and interesting about excess and punishment into psychiatry solving our problems.

Sorkin doesn’t always get the structure right, as if he hasn’t got the patience to actually make sure the fundamental plot information was clear enough, so eager was he to get on with the verbal pyrotechnics. Time is spent carefully exploring several poker hands – but the exact nature of the illegality of what Molly does running her poker games gets glossed over in seconds.

But then this is a film that isn’t really that interested in plot dynamics, or even in over-arching themes. What it’s interested in is sizzling dialogue, and letting actors deliver it. The camera sits back and watches. So it’s not a surprise the most memorable scenes feature Jessica Chastain and Idris Elba (both superb) in a room, talking (or arguing) with each other. It’s the moments like these where the film really works – and Sorkin the director basically stays out of the way, using a two-camera set-up to record the scenes, like a filming of a Broadway play.

Those two actors dominate the film. Chastain is excellent as Molly – ambitious, driven, playful but also vulnerable and ever-so-slightly bitter, who gets where she is through her own intelligence and hard work. Chastain also embraces playing a character with such a strong moral code – she’s terrifically warm and human in the part. Elba is equally fine, a wry professional with his own strong moral code (yup, The West Wing writer still loves those liberals of great conscience), an articulate (of course!), passionate advocate who is far warmer than he first appears.

The rest of the film never quite lives up to this, maybe because the poker games are never really that interesting, or because the life Molly leads among the rich and famous seems ill-defined (she has possibly the least impactful drugs addiction seen on screen). For someone who remains loyal to the end to her clients, we are never really clear why other than a suggestion of her basic sense of honour. Her projects are all set-up with ease, and the film builds towards a solution buried in psychiatry speak that similarly feels a little too easy.

Because while it is great that Molly is not defined by a romantic relationship – she is defined by men in virtually every other way. Her entire career is based on pleasing rich, middle-aged men (from whom she frequently has to bat away expressions of devotion or sexual interest). Three times she falls victim to senior male partners in business relationships. Above all, she is defined by her relationship with her overbearing father (well-played by a low-key Kevin Costner). The scene where this comes to a head, a father-daughter exchange late at night on a snowy New York bench, is so well-written and played you almost overlook its pattness.

Sorkin’s script is the most important thing here – and the film is built around it. Like Scorsese’s Casino (a film he must have seen a couple of times!) most of its opening act is structured heavily around Chastain’s expertly delivered voiceover. The actors get to enjoy delivering his engaging rat-a-tat dialogue, the expert playing and sharp dialogue ends up carrying a lot of uplifting moments in the film. It’s a film that embraces Sorkin’s scripting, and doesn’t worry about being too filmic about it: the zippiest moments of editing are so because the dialogue or voice-over demands it.

Some of the roles aren’t quite so well drawn: Michael Cera is just plain miscast in a role that needed a young Rob Lowe as an absurdly glamourous Hollywood poker addict (I can’t imagine people crossing a street let alone a continent to play cards with Cera). The rest of the women in the script get short shrift – even Molly’s mother is little more than a walk-on part.

Molly’s Game is a lot of fun, even if it’s probably about 15 minutes too long. It’s got some great dialogue and, if Sorkin turns out not to be the best interpreter of his own work, he’s certainly no dud as a director. Overall, the themes and plot don’t quite come together as well as they should. But it’s very well acted – Elba and above all Chastain are absolutely terrific – and it has more than enough sparkle to it for an enjoyable Friday night.
Email ThisBlogThis!Share to TwitterShare to FacebookShare to Pinterest
Labels: 2017, Aaron Sorkin, Brian d'Arcy James, Chris O'Dowd, Graham Greene, Hollywood satire, Idris Elba, Jessica Chastain, Kevin Costner, Michael Cera, Poker movie