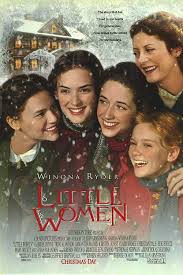 There are certain adaptations that simply set the standard. I’m thinking of the BBC Pride and Prejudice or Emma Thompson’s Sense and Sensibility. For productions like this, it almost seems superfluous to create another version: why would you want to when you can already watch the whole thing done perfectly? Gillian Armstrong’s superlative production of Little Women is such a film: so perfectly cast, immaculately acted and brilliantly assembled that I simply can’t imagine another production bettering it.

In Massachusetts during the American Civil War, the March sisters live with their mother (Susan Sarandon): sensible Meg (Trini Alvarado), tomboyish Jo (Winona Ryder), gentle Beth (Claire Danes) and temperamental Amy (Kirsten Dunst). While their father is away fighting, the girls grow up and experience the highs and lows of life and love, while never losing sight of the strong bond that holds them together.

Not only is it impossible to imagine another production besting this, I can’t imagine another creating so many “something in my eye” moments as this film manages. Gillian Armstrong’s tender direction gets a guaranteed emotional response from the audience every time, largely because she keeps the film simple, focused and doesn’t overegg the emotion. She recognises the story itself carries delicious highs and heartbreaking lows – and lets these moments speak for themselves. From its opening moments, establishing the girls’ love of theatricals and their own private “Pickwick club”, you know you are in the safe hands of people who fully understand the novel.

It’s a film which plays it very, very simple and lets the beauty of the moments speak for themselves. Many work perfectly: no less than three times I felt myself welling up, from the presentation of Mr Laurence’s piano to Beth, to Beth’s tragic death, to the final scenes between Jo and Professor Bhaer. Each of these moments is quite simply perfectly played and carry a major emotional wallop. It’s because Armstrong sets out a film that is totally straight, and a completely loving and respectful adaptation of Alcott’s novel. Armstrong, and adapter Robin Swicord, also build a profound, focused story of growing up and learning to adjust to loss and the changes life brings us. Focusing on this creates a very clear journey in the movie – as well as a story anyone who has had any life experiences is going to respond to. 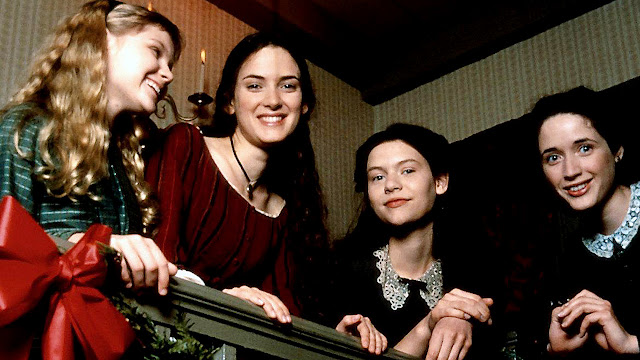 Part of the reason why the film is such a complete success is the superb playing from a cast without a weak link among it. The four March sisters genuinely feel like people who have grown up together, so strong are the bonds of chemistry between them. I’d also hugely commend Armstrong and Swicord for so skilfully establishing the different personalities of the sisters – within the opening few minutes you’ll feel like you know all their personalities exactly (a task utterly failed by a recent three-part BBC adaptation).

In the lead role, it’s scintillating to watch Winona Ryder and remember what a superb, heartfelt and gloriously expressive actress she is. Vulnerable but also tomboyish, boisterous and also tender, she brilliantly captures Jo and her semi-bohemian, semi-homespun yearnings, and her passionate love for a life different from the traditional. Ryder also has such wonderful skill with conveying emotion – at several key moments, waves of emotion seem to pass over her face in careful micro-expressions. Several moments carry the weight that they do, because Ryder sells them so well.

Her three sisters are equally well-cast. If she has a rival for skill of expression and conveying depth of emotion it’s Claire Danes, who is astonishingly good as the gentle Beth (hard to believe she was only 15 at the time!). Danes’ simple joy and her gentle, unassuming love for those around her really hit home. Danes’ joyful warmth makes Beth’s acceptance of the piano from Mr Laurence a beautiful moment, while her tender humanity makes her death incredibly moving. Kirstin Dunst is superb as the young Amy – part brattish pre-teen, part excitable child. Her sudden horror when she realises the gravity of burning Jo’s book again helps this moment work so well. Trini Alvarado has the less interesting part, but her grounded, calm, proper and gentle performance as Meg balances the work of the sisters really well, and Alvarado demonstrates she has real empathy for the role.

The rest of the cast are equally good. Samantha Mathis (taking over the older Amy) delivers an excellent portrayal of a woman keen to head into the world. Susan Sarandon is perfect as a wonderfully loving, all-knowing mother. Christian Bale is perfect as the playboyish Teddy, full of playful fire. John Neville sells a few crucial scenes as a humane Mr Laurence. Gabriel Byrne is certainly far more handsome than his literary counterpart, but he’s so wonderfully gentle, caring and kind that it hardly matters: the relationship between him and Jo is beautifully judged. 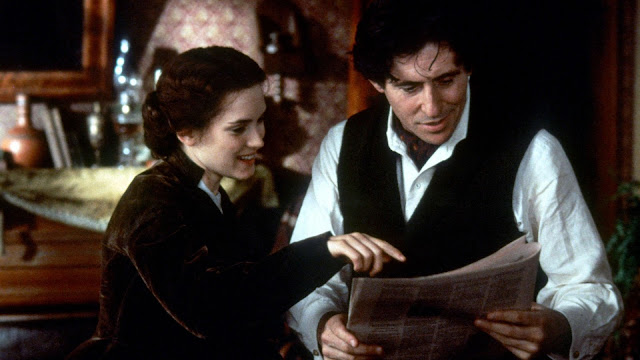 Beautifully judged basically sums up the whole thing: there is not a bum note in this whole film. Armstrong and Swicord nail every single decision. Armstrong’s direction is outstanding: a brilliant example is the gently, unbearably sad sequence of sprinkling roses in Beth’s room after her death – it’s so simply done but incredibly moving. The film is crammed with moments like this, beautifully scored by Thomas Newman. Swicord’s script is marvellous, and it successfully draws out the feminist message of the book, without hammering the points: it gently flags up the lack of opportunities often available for women at the time, but also celebrates the contribution they can make.

Little Women is a simply superb piece of adaptation, and a deeply affecting and heart-warming film. Only a film that lets you invest in the characters as much as this, could move you as much as it does. When Ryder smiles, you feel your whole world light up. When Danes cries with joy you feel your heart sing. When tragedy comes you feel like you’ve had a loss yourself. The story is superbly streamlined, each character is perfectly established, the relationships between them all are so wonderfully done – you can’t help but fall in love with it. If it had been a film about men it would have been littered with Oscar nominations. As it is, despite the sexism of the Academy, it’s a film you’ll treasure and return to again and again.
Email ThisBlogThis!Share to TwitterShare to FacebookShare to Pinterest
Labels: 1994, Christian Bale, Claire Danes, Eric Stoltz, Gabriel Byrne, Gillian Armstrong, John Neville, Kirsten Dunst, Literary adaptations, Mary Wickes, Samantha Mathis, Susan Sarandon, Trini Alvarado, Winona Ryder