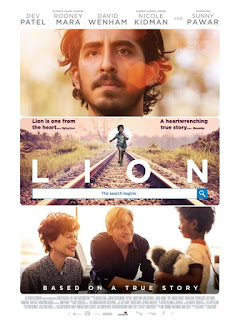 In 1986, Saroo (Sunny Pawar) is accidentally separated from his brother Guddu (Abishek Bharate) and mother (Priyanka Bose) after being trapped on a train that travels 1,600km to Calcutta. Unable to find his way home, and dodging the dangers of Calcutta’s streets, he eventually ends up in an orphanage. He is adopted by an Australian couple, the Brierleys (fine and tender performances Nicole Kidman and David Wenham). Twenty years later, a chance meeting with a group of Indian students brings Saroo’s (Dev Patel) memories flooding back– and dedicates himself to retracing his steps and finding his family in India.

Lion is an overlong expansion of a story that would really spark your interest when presented in a newspaper article. But Garth Davies’ film drains the dramatic life out of the story by ludicrously overextending the telling in order to try and eke as much emotion from the audience as possible. Lion is under two hours, but it really should be at most an hour and a half.

The problem is the central section in Australia, while our hero tries to locate his roots. It just isn’t quite interesting enough, despite sterling, committed and emotional work from Dev Patel. Put simply, even with an extraordinary story like this, the film can’t help but communicate Sarro’s obsessions through cinema’s clichés. So we get a madness board with pins and bits of string to link clues. We get Saroo increasingly dishevelled. We get him driving away family and girlfriend. We get moody, tearful glances into the middle distance. Even the final solution to the mystery occurs after a spark of inspiration during a rage fuelled “I’m going to wreck this board and give up” moment. This whole section just serves to reduce the story into movie-of-the-week territory.

The film just doesn’t quite connect with us as it should. Perhaps because of the amount of time given over to very slow Google Earth searches, or overblown camera tracking shots across train lines, or expansive slow, piano-scored moments of emotional torment from Saroo. It’s a shame because there are flashes of good material in there – Nicole Kidman’s has a stand out scene to explain why she chose not to have children – and Dev Patel is the best he’s been. But it doesn’t quite work. After Saroo’s emotional revelation at an Indian friend’s house and realisation that he is “lost” (and this quiet devastation from Patel is affecting), the story doesn’t really kick off. It just slows down.

It’s a shame as the opening third of the film with young Saroo lost in Calcutta is very well done, even if it seems virtually every male living on the streets is a paedophile. The early scenes with Saroo and his brother are very good, and establish the strength of their bond. Sunny Pawar does a marvellous job as the lost boy, and Garth Davies films Calcutta with an earthy realism, as well as having a wonderful sense of empathy for the vulnerability of children. It’s also striking to see how uncommented upon a child alone on the streets of Calcutta goes. The dangers Saroo dodges feel genuinely threatening, and helps us invest emotionally for the rest of the film.

The moments that flash back to this do get overplayed later. Much as I initially liked Saroo hallucinating his brother and mother appearing around him in the streets of Melbourne, it’s a card that quickly gets overused. Like many of the ideas in this film, it gets hammered home a little too much. It’s that whole middle section, with poor Rooney Mara saddled with the thankless part of supportive girlfriend. You could have cut it down by 20 minutes and had the same impact. Garth Davies’ direction simply gets carried away with the lyrical sadness, to try and tug our heartstrings.

The problem is the most moving part of the film is the final sequence where we see the real people meeting in the streets of Khandwha. Nothing else in the film really measures up to this genuine emotion. Particularly after we’ve watched a man searching Google and behaving moodily for well over forty minutes. It’s a film that loses its way because it’s moments of emotional reality like that which make these stories truly profound – and a dramatisation can never provide that. With the film also unable to find a way to make the search as dramatic and engaging as the getting lost and being found, it also flounders in the middle, taking way too long to get us to the destination. It’s got its moments, but it’s a well assembled film that outstays its welcome.
Email ThisBlogThis!Share to TwitterShare to FacebookShare to Pinterest
Labels: 2016, Australian films, David Wenham, Dev Patel, Garth Davies, Nicole Kidman, Rooney Mara