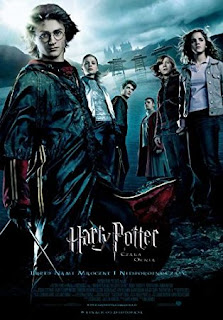 After Alfonso Cuarón announced he would only direct one Harry Potter film, the producers faced a stiff challenge. The third Harry Potter film had been the best so far, and elevated both the acting and design into a far more filmic, epic position than before. Could Mike Newell match this in Goblet of Fire? Sure he could.

If nothing else, Goblet of Fire is a triumph of adaptation. Used to the page-to-screen translations of the earlier films, it was expected that the film would be split into two parts. Instead Newell and screen-writer Steven Kloves turned Rowling’s huge fourth book into a tightly structured and focused film that places Harry’s emotional journey firmly at its centre, and includes only the things that support the building of that story.

Goblet of Fire is a film of fascinating contrasts. In fact, it’s probably the lightest, most ‘teenage’ of the films, while also containing a dark final chapter and more death than we’ve had so far in the series. But this film is actually rather funny and allows its characters to focus on the challenges and stresses of growing up, with only a few flashes of danger and darkness – before they get wrapped up in the battle against Voldemort that will dominate the next few films.

So this is the film where we get crushes, where Harry and Ron struggle to get dates for the ball, where we get a sense of Hermione not only growing up – but growing in confidence. Harry develops a hopeless crush on Cho Chang – his “Willyougotoballwithme” hurried date proposal is all too familiar to most men, as is his “oh no never mind not a problem” when she (reluctantly) says no. Meanwhile, Ron struggles to understand his own hormonal feelings towards Hermione. It’s all well done and very funny. The ball itself is a highlight of teenage awkwardness, as well as genuinely feeling like a teenage party (including a sort of wizarding mosh pit). 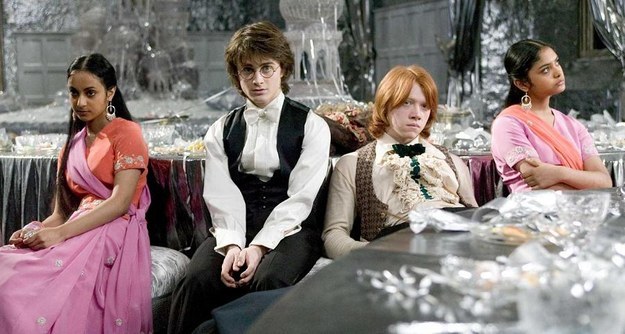 This teenage awkwardness carries across into Harry’s involvement in the Tri-wizard Tournament, a series of stirring set-pieces against dragons, mer-people and a wicked ever-shifting maze. The tournament offers a range of puzzles Harry needs to solve – more than enough opportunity to allow other characters to get involved. Neville Longbottom particularly moves to the fore for the first time – not only embracing dancing (hilariously nearly every boy is as embarrassed by it as you might expect) and landing a date, but also using his knowledge of plants to help Harry, and we get increased insight into his own tragic backstory. It’s great to see Matthew Lewis being able to stretch himself – and show the roots of the good young actor he’s become.

The film spends a lot of time on family roots, both tragic and happy, in particular fathers and sons. We have no fewer than four father/son match-ups in these films, and each gives us a slightly different perspective on family relationships. Mark Williams’ matey but loving Arthur Weasley gets more screen time than ever before, and Williams develops him into a protective but warm patriarch. Contrast that with the troubled coldness the Crouches show each other – and the swift speed with which Barty Crouch denounces his own son. We get a glimpse of the sort of father Harry could have had with a brief ghost appearance of Harry’s parents. The strongest father-and-son relationship we get to see is that between the Diggorys, an immeasurably proud father and a perfect son.

Mentioning Amos Diggory means we have to bring up one of the most extraordinary acting cameos in the entire series: Jeff Rawle’s work here is brilliant. Is there a more moving moment in the franchise than his uncontrollable grief when Cedric is killed? His anguished crying of “That’s my boy” will haunt many a viewer for years to come. It’s a measure of the brilliance Mike Newell had with actors, and the shrewdness of the casting throughout. Would anyone else have thought of George Dent from Drop the Dead Donkey for this King Lear-like cameo? Would anyone else have thought of Trigger as strict disciplinarian, Barty Crouch (Roger Lloyd-Pack is terrific). The film also shrewdly cast David Tennant about five minutes before he became one of the most popular actors in the country, for an excellent malevolent cameo of pride and bitterness.

The acting throughout is terrific – Mike Newell has the reputation of an actor’s director, and he really shows it here. The three leads are no longer children but teenagers, and they feel like it. Radcliffe plays Harry with increasing maturity and emotional depth, balancing with nuance and quiet confidence the light comedy of Harry’s hormonal yearnings, his fear during the tournament, and his terror and resolve during the confrontation with Voldemort. It’s quite a range he has to go through here, and this features his best performance so far.

Similarly, Grint increases his comedic range with a sullen, teenage I-don’t-want-to-admit-I’m-interested-in-girls series of exchanges. Watson demonstrates her obvious chemistry with both her co-stars, and also does a great job of showing Hermione’s growing emotional maturity and confidence. Many of the other regulars continue to do great work, with Gambon really settling into this role of Dumbledore (although his fury when Harry’s name emerges from the Tri-wizard cup seems strangely out of character).

The new cast members as always offer plenty. Miranda Richardson delivers a lot of comic flourishes, and snappy media pot-stirring, as gossip columnist Rita Skeeter. Brendan Gleeson carries all the charisma you would expect as a maverick, perhaps even unbalanced Mad-Eyed Moody. In a further testament to the excellent casting directors here, Robert Pattinson (five minutes before his fame exploded) is very good as a suave, handsome, slightly cocky but charming Cedric Diggory.

The film though is building towards its surprising gear-change late in the story – and the introduction of Voldemort, murder and death into a film that until now has been an engaging and amusing action film and teenage comedy. Perfect casting for Voldemort was secured with Ralph Fiennes. Of course Fiennes could play Voldemort standing on his head, but his softly-spoken suaveness and patrician charm is absolutely perfect for the role. You really get a sense of ice running through his blood, and his cold cruelty and arrogance. Fiennes is pretty much iconic in this role. 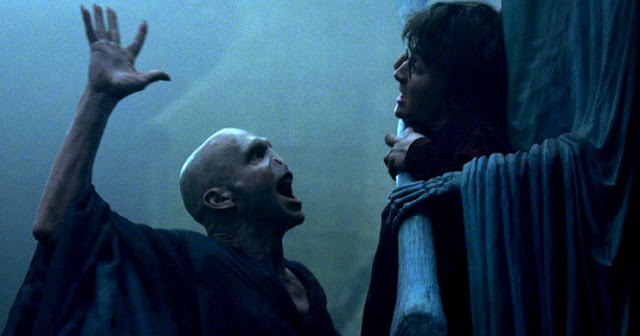 The final sequence itself is brilliantly done, a thrilling and terrifying sequence, which really hammers home the extent of Harry’s powerlessness and vulnerability – while the brutal, instant dispatching of Cedric immediately changes the ball game for the rest of the series. The scene is brilliantly shot with a series of blacks and greens for mood and offers a sensational conclusion, as well as an expertly shot duel between Harry and Voldemort that established the filmic language for all subsequent duels that were to come.

Goblet of Fire is another example after Prisoner of Azkaban of a great piece of franchise film-making. It’s not quite as stand-alone, or as perfectly dramatically formed, as the previous film – but that’s because this one ends, like none of the other films before, on a cliffhanger. For the first time, this series wasn’t offering an opponent and obstacle that could be overcome and left behind at the end of the film. Here the baddies win – and the feeling going forward is that, with the help of friends and family, we can battle the evil, but it will still be there. It’s an engaging, funny and very well-structured film, packed with decent twists, and ends with a humdinger of a scene in a film that has already had plenty of excellent moments. Harry Potter is surely one of the best franchises there is.
Email ThisBlogThis!Share to TwitterShare to FacebookShare to Pinterest
Labels: Alan Rickman, Brendan Gleeson, Daniel Radcliffe, David Tennant, Emma Watson, Harry Potter, Michael Gambon, Mike Newell, Miranda Richardson, Ralph Fiennes, Robert Pattinson, Rupert Grint, Timothy Spall