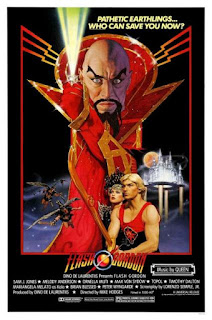 Well. If almost 40 years on, Flash Gordon is a cult favourite and beloved by millions, then there is hope yet for Jupiter Ascending. By any objective standards, Flash Gordon is a terrible film. But it gets a pass from millions because it’s one people have grown up with. I dread the same reaction to The Phantom Menace from those people whose first exposure to Star Wars was through that film.

Ming the Merciless (Max von Sydow) rules the planet Mongo and decides to destroy the Earth for his own amusement. Disgraced ex-NASA scientist Hans Zharkov (Topol) is the only man on Earth who believes a series of natural disasters are the actions of invaders from space. Zharkov flies a rocket into space to find them – accompanied, for strange reasons, by professional football star “Flash” Gordon (Sam J Jones) and travel agent Dale Arden (Melody Anderson). Arriving at Mongo, they encourage its citizens – especially the forest people led by Prince Barin (Timothy Dalton) and the hawkmen led by Prince Vultan (Brian Blessed) – to unite and rise up against Ming.

Yup you read that right. It’s all as barmy as you might expect. Any film that asks to believe Brian Blessed can fly is always going to be odd. Flash Gordon does at least have its tongue firmly in its cheek. The whole thing is as camp as Christmas. In an age where science fiction and comic books are treated like holy texts, it is at least interesting to see a film that treats its source material with such a breezy lack of respect. The entire film is an exercise in high camp, cheaply put together, that refuses to take anything seriously and actively encourages the respected actors in its cast to take the piss.

So what is Flash Gordon? Is it a big old joke? Yes it probably is. No one is taking it seriously. The actors clearly think it’s a pile of campy rubbish. The producers seem determined to throw as much technicolour cartoon colours at everything as possible. The film is so cartoonish it all but has “Pow!” and “Thwack!” appear on screen as punches land. At a time when Star Wars (and it’s hard to believe it, but George Lucas only made Star Wars because he couldn’t get the rights for this) took its space opera roots rather seriously, this seemed to miss the point completely. It’s a would-be Star Wars rip off that has nothing in common with the tone of the thing its ripping off. Usually that would be a good thing: here I’m not sure it is.

So the dialogue is terrible, the plot line makes no real sense, the film barrels around telling jokes against itself as inopportune moments. Characters shrug off events with no problems at all - at one point a character undergoes brainwashing torture: two scenes later he's fine ("I just didn't think about it" he gleefully tells someone. It's never mentioned again.) The special effects, even for the time, are shockingly bad (the backdrops are sub-Doctor Who. The costumes and design are ludicrously overblown, like an explosion in a campy dressing-up box. It’s a terrible display of excess married with a complete lack of understanding about what made the things it’s trying to rip off successful in the first place. But yet, and yet, and yet it’s still in a terrible, terrible, terrible way quite good fun.

But perhaps the most interesting thing about its campy rubbishness, is how much odd sexual stuff creeps in under the radar. There are also lashings of sadomasochism, incest, orgasms, sex dens, threesomes, swinging, voyeurism – acres of cheeky sexual humour. Ming has a ring that can induce orgasms (it’s so effective on Dale Arden that it’s even commented only Ming’s daughter has had such a response). Ming has a harem, full of opiates to encourage “performance”. There are references to pleasure planets and sex toys. Ming’s daughter is whipped while tied to a bed by Ming’s henchmen (while Ming watches eating some popcorn). The arborians have a bizarre ritual which seems laced with wanking references. It never stops. At least they had some fun.

Some of the actors are also clearly enjoying themselves. Of course Brian Blessed throws himself into it: an actor who never knowingly underplays, Blessed rips through a bizarre role that sees him perform in a jockstrap with some unconvincing wings. Timothy Dalton channels Errol Flynn. Max von Sydow chews the scenery and virtually everything else in sight as a campy, moustachio-twirling Ming. Peter Wyngarde has a great voice and uses it to marvellous effect as pervy security chief Klytus, while Mariangela Melato plays his dominatrix assistant. There are bizarre, eclectic casting choices: so we get Look Back in Anger author John Osborne playing a high priest, Blue Peter’s Peter Duncan as an initiate, and Richard O’Brien (of course!) playing – well to be honest himself.

Sam J Jones is of course simply awful as Flash (wooden, dull and confused). Melody Anderson isn’t a lot better as Dale Arden, while Ornella Muti gets some awful dialogue which she does at least deliver with some conviction (sometimes too much: “Not the BORE WORMS!” sticks in the mind as a bizarre moment of over such over conviction that it simply becomes funny). It’s a bizarre mix of acting styles and overblown, fourth-wall leaning. It’s so bad, I suppose, that to many people it’s good. But actually it gets a little overbearing.

Because nothing is taken seriously at all, the film actually becomes a bit wearing after a while. The writer later regretted playing everything for laughs: it removes any stakes from this ridiculous film. It says a lot that Brian Blessed – the most overblown actor in it – is the only one who really emerges with dignity intact. Blessed at least knows it’s utter crap and plays it like he’s taking the piss in every scene. He commits so fully to the scenery chewing that it sort of works. The rest of the cast can only aspire to his levels of camp. Flash Gordon is a terrible film. But age and fondness have been kind to it, and made it remembered as something better than it is. It’s a misfiring gag with some great Queen songs. It goes on forever, it looks awful but it fails utterly as anything but a joke. But hell maybe that’s enough.
Email ThisBlogThis!Share to TwitterShare to FacebookShare to Pinterest
Labels: 1980, Box office bombs, Brian Blessed, Camp films, Comic books, Mariangela Melato, Max von Sydow, Mike Hodges, Peter Wyngarde, Philip Stone, Richard O'Brien, Science fiction, Terrible Films, Timothy Dalton, Topol