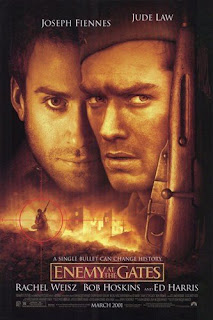 The Second World War in film almost always focuses on the heroics of the Western Front, where the rights and wrongs are usually pretty clear (the Western powers are noble, the Nazis savage). So it’s different to set a film on the Eastern front – where the Second World War was arguably really won and lost, and where morality is much more complex. The Nazis are terrible, but Stalin’s Russia was no picnic either.

Stalingrad in 1942: Soviet tactics involve giving every other man a gun, and ordering the second man to follow his partner and take his gun when he is killed. Witnessing the sharpshooting skills of young soldier Vasily Zaytsev (Jude Law), political Commissar Danilov (Joseph Fiennes) decides to turn him into the romantic hero the Soviets need to help inspire them. He’s so successful in doing so that the Germans send their own expert sniper, Major König (Ed Harris), to find and kill Zaytsev. Meanwhile, the friendship between Danilov and Zaytsev becomes complicated when they both fall in love for the same woman, sharpshooter and German translator Tania Chernova (Rachel Weisz).

It’s quite something for a film to be denounced by both sides of the war it’s depicting: this probably means it’s doing something right, as it doesn’t deny the hellish atrocities carried out on both sides (even if many of these are implied). The real reason to be outraged is probably more to do with its general flatness and shoving of the great battle into the standard war-movie clichés. There are some attempts to suggest what we are seeing is a true story, but other than a man called Zaytsev existing, there is very little of truth on show. Instead we get a Hollywood view of Soviet Russia: where the characters we like are regular joes, while the ones we don’t are full-on Commie zealots.

The film starts well, with an extended sequence that follows Zaytsev and several other soldiers boarding boats, crossing the river, arriving in Stalingrad and being marched immediately into the front line. Half the men are killed – the fleeing remainder are swiftly machine gunned by their officers for cowardice. It brings back memories of Saving Private Ryan and, while not as good, gives the impression we are going to see a “horrors of war” film – which the film doesn’t turn into.

Instead we get an increasingly melodramatic plotline around love triangles and sniper duels that never really feels like Russian lives at the time. In fact, the film fails to capture any real sense of Soviet Russia, other than its dirt and ruthlessness. Danilov and Zaytsev celebrate their newfound fame with a sort of giddy laddishness that just doesn’t fit any Russian’s understanding of what being noticed in Soviet Russia would surely mean. When the film does try to sound Soviet it stumbles: there is a painful (unintentionally) funny moment when Zaytsev talks about his dream job to be working in a factory, because factory work seems so noble.

The love triangle also seems ripped from Mills and Boon. Not a lot of it rings true, with Danilov turning into some sort of jealous head-boy. The romance blossoming between Zaytsev and Tania can’t decide whether it’s two souls coming together, or whether it has the air of a “last romance” with death around the corner. So it’s either overblown and overplayed, or not given enough room to build. It doesn’t help that there are a number of strange choices – not least a sex scene where Rachel Weisz seems more uncomfortable and in pain than in the throes of passion.

Maybe it’s that none of the performances of the lead actors feels either particularly Russian or soldierly. Jude Law fails to convince as a man from peasant hardship. He’s also saddled himself with a wooden “peasant” accent that not only makes Zaytsev sound like a mockney chancer, but also sound like a worse actor than he is. Joseph Fiennes is more school prefect than Soviet Commissar. Rachel Weisz is the most natural of the three, but her character makes little real sense: sometimes she’s gung-ho, others she talks about wanting this war to end. None of these actors really brings the right charisma needed – in particular Law looks as overwhelmed by the events around him as Zaytsev claims to feel.

The film belongs to the sniper sequences, and the duel of wits that develops between Zaytsev and König. Ed Harris’ part is as limply written as the rest, but Harris has a movie star charisma the others lack, and suggests a great deal of reserved arrogance and professional coldness. He’s the best thing about the movie. Annaud shoots the slow-burn waiting of sniping with a tension – and the film rather bravely stresses König’s superiority time and time again. As the film zeroes in on these two men trying to outmatch each other, it feels like it’s about something – and also that it’s relieved to leave the war at large behind. 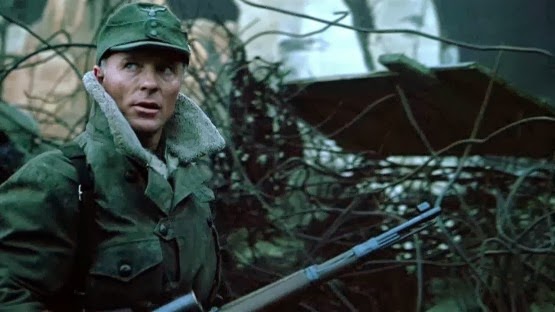 Because for a film set in the Eastern Front, this feels unnerved by there being right and wrong on both sides. It even feels squeamish about sniper shooting. After his initial display of skill, we literally don’t see any sniper work from Zaytsev again – the “cowardly” killing from a distance of regular German soldiers is handed out to other characters. Russians are sorted into good and bad, with the good showing they are “just like us” by quietly denouncing their government. König can’t just be a professional, but the film has to try and nudge him into being a cold-hearted killer. It’s a film about the complex morality of war, that wants to make it as simple as possible.

It’s still well-made, but you wish that more time had been directed towards the script, to give us a story that was slightly better and characters that felt a bit more real. James Horner supplies a decent score (interestingly it also shows how much of film music is re-used, as key refrains in this film are strongly reminiscent of Willow and Troy). But the lead actors are all miscast (Bob Hoskins isn’t much more convincing as a bulldog Khrushchev) and it feels like a film that’s running away from a complex series of issues to try and present something as close as possible to goodies vs. baddies. The War on the Eastern Front was a hugely complex thing: this film hardly scratches the surface.
Email ThisBlogThis!Share to TwitterShare to FacebookShare to Pinterest
Labels: 2001, Bob Hoskins, Ed Harris, Eva Mattes, Jean-Jacques Annaud, Joseph Fiennes, Jude Law, Rachel Weisz, Ron Perlman, War film, World War Two