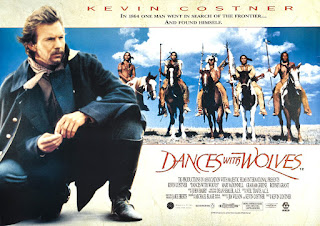 At the end of the 1980s, Kevin Costner was the biggest film star in the world, with a string of hits behind him. So he did what Hollywood stars before and since have done: cashed in all his chips and made the film he had to make. It would be long, it would be mostly in a foreign language, it would have no stars (other than himself) and – most poisonous of all at the time – it would be a Western. When the funding started to dry up, Costner even paid for the overtime out of his own pocket. Not for no reason was the project dubbed “Kevin’s Gate” by the sceptical media, eagerly expecting Hollywood’s golden boy to land on his face.

How wrong they were. Dances with Wolves not only made almost 20 times its budget at the box office, it changed many Americans’ perceptions of Native Americans – oh yes and it also won seven Oscars, including Best Director for Costner and Best Picture. Costner plays Lt. John Dunbar, a civil war veteran who (after an act of suicidal death-seeking foolishness to avoid having his leg amputated) chooses a posting to an abandoned fort in the middle of Sioux country. Forgotten by the army, Dunbar forages alone and comes to the attention of the Sioux. At first cautious around each other, Dunbar eventually befriends healing man Kicking Bird (Graham Greene) and finds himself cautiously welcomed into the Sioux tribe as a guest, finding love with Stands With A Fist (Mary McDonnell), a white woman raised by the Sioux. He begins to find the Sioux as kindred spirits.

Costner’s film is an expansive, heartfelt poem, a film in love with sweeping vistas and with an endearing, humanitarian view of the world, beautifully shot by Dean Semler and helped immensely by a wonderful, swelling lyrical score by John Barry – one of the best scores you are likely to hear. Costner dispels any doubts about his abilities to direct by throwing himself into a truly epic canvas – and some of the ideas here are reminiscent of Lean, in their beautiful use of the American plains. Within this large canvas, Costner tells an actually fairly simple, but also sweetly touching, story of the disillusioned man who finds himself in the wilderness.

If there is a flaw with Dances with Wolves it is that its story is so traditional and (in many ways) predictable. It’s understandable that the story introduces a white man to be our surrogate when encountering the Sioux. But it’s hard to shake the feeling of all that all-too familiar trope, the White Saviour. The primary good the Sioux serve in the film is to help Dunbar discover himself, to come to peace with himself. In turn, it’s Dunbar who increasingly becomes the tribe’s protector – helping them to find the buffalo, giving them guns and leading the defence against a Pawnee tribe attack, increasingly recognised as a “celebrity” in the tribe.

On top of that, Dunbar’s love interest becomes the only other prominent white character in the film. Again I understand that the film needed someone who was able to serve as a cultural and language bridge between Dunbar and the Sioux. But could there not have been some sort of narrative invention to make this female character a Sioux who had learned some English? It seems as if the film can only go so far – and showing a multi-racial relationship was probably that. Saying that, McDonnell is very good as the gentle Stands With A Fist, but it feels like a cop-out.

Costner’s own central performance gives everything the film requires. It’s a fairly simple role: the disillusioned soldier finding inner peace. The film plays very much into the attraction of the “noble savage” – the simplicity and honesty of the Sioux lifestyle being so much purer than the corruption of the “modern” world (needless to say, nearly all the white men in the film are truly awful people). But Costner brings his considerable charm to bear, delivering many of his lines with that slightly cocksure, shy grin he uses so well. The film suffers from its narration being delivered by Costner’s flat and unmodulated voice, but he’s perfectly fine in the role.

He plays it with an entirely straight honesty – and, for all its faults, this honesty makes the film work. The film goes overboard to humanise and provide empathy for the Sioux, as if wanting to correct generations of films that have cast Native Americans as dangerous savages. The Sioux are humane, generous, welcoming and dignified. Graham Greene has to carry much of this as medicine man Kicking Bird, and he gives a stirring, sympathetic performance, with equally fine performances from Rodney A. Grant and Tantoo Cardinal in particular.

The film delivers all its tropes and traditional structure with a straightforward, heart-warming simplicity – it really means that you go with the picture, and find yourself as drawn to the Sioux lifestyle as Dunbar is. Also, for all the criticism of the film’s narrative, it shouldn’t be forgotten what a warm reception it had from Native American groups, delighted to see their ancestors presented in such an empathetic light (the Sioux Nation later adopted Costner). And the film sensitively and brilliantly stages this way of life, with a series of beautifully done vignettes ranging from marriage to simple cooking and spending time around the fire.

The most stunningly filmed of these is the buffalo hunt, a soaring marvel of camera work, editing and horseback adventure. The film doesn’t let you forget the sequence before either, where the Sioux come across a series of buffalo killed for their hides by white hunters – in comparison to the complete use of the carcass (and limited numbers killed) by the Sioux. The buffalo hunt sequence is an exciting triumph – it’s probably responsible for several of the technical Oscars the film received – and it’s a tribute to Costner’s mastery of the visuals of the American West (even if, rumour has it, chunks of it were actually filmed by Kevin Reynolds).

Dances with Wolves is a very heartfelt and honest film – and its sincerity means it kind of gets away with its obvious flaws (and its great length). Costner wanted to make an important film and he does to a certain extent – but one which wears its importance fairly lightly, and makes a series of enriching humanitarian arguments that carry real weight. It’s in many ways an extremely accomplished retelling of a familiar story. But I found myself genuinely moved by the story it wanted to tell, and the questions it asks of its audiences. Is it a great film? Probably not, but it is a very good one.
Email ThisBlogThis!Share to TwitterShare to FacebookShare to Pinterest
Labels: 1990, American Civil War, Best Picture, Graham Greene, Historical epics, Kevin Costner, Mary McDonnell, Rodney A Grant, Wes Studi, Westerns