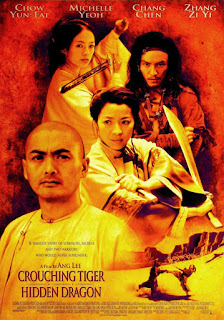 Ang Lee is the sort of director who can turn his hand to anything – is there a director with a more eclectic CV? From costume dramas to comic book films, coming-of-age 1970s stories to gay cowboys, he seems able to do everything. But the film that cemented him as a blockbuster director was Crouching Tiger, Hidden Dragon, an awe-inspiring, visually stunning, beautifully made martial arts film, told with a poetic grandiosity that opened the West’s eyes to a whole genre of film-making.

Li Mu Bai (Chow Yun-Fat) is looking to give up the warrior lifestyle, and surrenders his legendary sword “Green Destiny”. Mu Bai asks Yu Shu Lien (Michelle Yeoh), a professional bodyguard, to guard the sword on its way to its new owner. Mu Bai and Shu Lien have long held feelings for each other, but her late fiancée being Mu Bai’s best friend led them to never act on (or truly speak of) their love. The sword is stolen by a mysterious warrior, soon revealed to be the daughter of the local governor, Yu Jiaolong (Zhang Ziyi). Jiaolong has been trained by Jade Fox (Cheng Pei-pei), who murdered Mu Bai’s former master. Gradually the sword becomes the centre of a complex clash between these characters, of conflicting emotions and desires.

Despite its gravity-defying visuals, what Crouching Tiger, Hidden Dragon is really about – and perhaps why it works as well as it does – is contrasting the principles and standards of two different generations. Li Mui Bai and Yu Shu Lien have both lived lives governed by restraint and self-denial, not least in denying their own love. Jiaolung and Luo, on the other hand, are far more willing to act on their emotions – even if these lead to destructive consequences. It’s the human stories like this that ground the drama and make it something with heart that you can invest in.

Jiaolong isn’t willing to tame her wild spirit, and Lee’s film explores within it the nature of mentor-mentee relationships, and the level of confinement that comes from training: Jade Fox wants to control Jiaolong, and both resent each other for the restrictions they have placed on each other. Mu Bai wants to train Jiaolong – but she doesn’t want to submit herself to a master. Mu Bai has spent his whole life searching for Jade Fox to avenge his master. The shadows that masters place over their apprentices hang over the whole movie.

It’s also a refreshing movie that places women so firmly at the centre. Its central figure is Jiaolong, a young woman with an instinctive mastery of the art of Wudang – and she has the fiery defiance and impulsiveness you would expect of a traditional male figure. Jiaolong is a loving but damaged figure, confused and poisoned by Jade Fox’s resentment. She can love with great feeling and also feel a prickly resentment towards the same person – a feeling she expresses time and again. Zhang Ziyi is terrific in the role, an electric screen presence, it’s impossible to take your eyes off her.

She is contrasted throughout the film with Shu Lien, expertly played by Michelle Yeoh. Shu Lien has lived years of control over her feelings, but carries great reserves of emotion. Yeoh’s eyes are crowded with emotion, and she conveys a great sharpness. Shu Lien is a shrewd, kind but reserved character – someone who realises too late the price she has paid. For all the combat in the film, you feel that the real clash is between these two women and how they have chosen to live their lives. 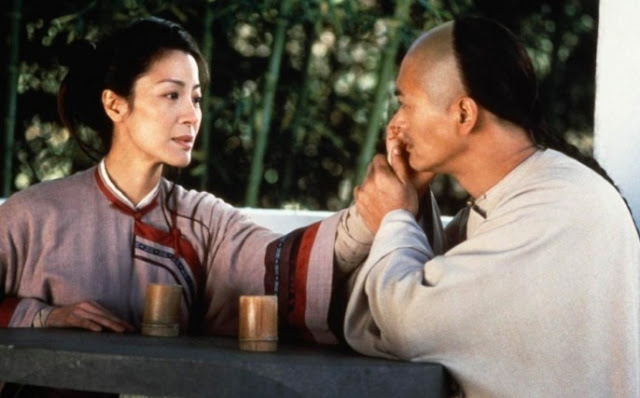 In the lead male roles, Mu Bai is played with a serene calm by Chow Yun-Fat. Yun-Fat is so reserved that he’s not always as interesting as he could be – despite having a few beautifully played moments. Chang Chen as Lo is a more conventional romantic figure, but he has a lot of charisma – and it’s also a refreshing balance that he is both the more traditionally “female” character in the relationship, but also feels like a worthy partner for Jianlong.

But the thing that makes the film really memorable is its extraordinary beauty. Ang Lee is a master at marrying up marvellous, dynamic images with intelligent, thematic plotting. The battle scenes are of course the most memorable, and they are truly striking, wonderfully choreographed by Yuen Woo-ping. These defy gravity and are extraordinarily graceful in timing and movement – as striking and genuinely beautiful to watch as they are exhilarating. They look marvellous and Lee films them with a disciplined simplicity to allow us to appreciate their beauty. 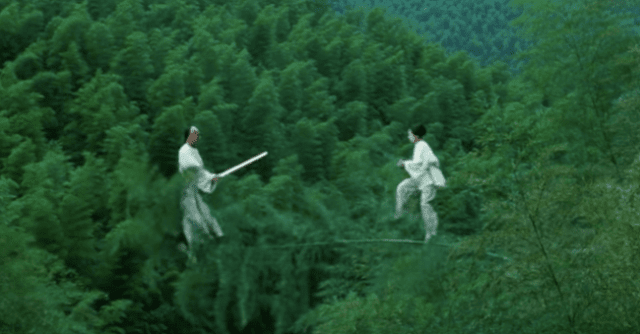 On top of that, the overall design and feel of the film is wonderful. Every scene is carefully framed and beautifully composed. Tan Dun’s score is marvellous (amazingly the whole lot was composed, produced and recorded in just two weeks) and really helps to strength the emotions in the scenes themselves. Lee’s masterful direction never loses track of the emotions and relationships that underpin the action sequences, and makes them develop and grow organically from the story, rather than fight scenes for the sake of it.

Crouching Tiger works because it has a strong story, while showing some beautiful and breathtaking fight sequences, the likes of which many people had never seen before. It’s a well-paced movie, that packs a lot into a tightly controlled run time and its thematic richness gives every scene something to reward the viewer with. The real hero here is Ang Lee. Lee is not just a director who can deliver action, he is a man with an intimate emotional understanding. In particular, he has shown in his films an empathy and warmth towards women, and an appreciation of their worldview, in a way few other male directors have managed. Crouching Tiger still stands up – it’s still strikingly different, well acted, looks gorgeous and has a lot of emotional investment.
Email ThisBlogThis!Share to TwitterShare to FacebookShare to Pinterest
Labels: 2000, Action Films, Ang Lee, Chang Chen, Chinese films, Chow Yun-Fat, Historical epics, Martial arts, Michelle Yeoh, Zhang Ziyi