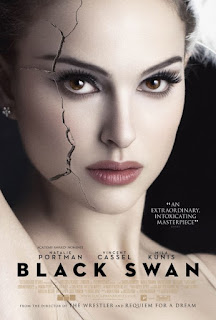 Something about ballet just makes people think of obsession. Many dancers criticised Black Swan for perpetuating myths about the dangerous psychology, the quest for perfection, the personal life imbalance connected with the all-consuming art ballet seems to be. It’s hard not to agree with them – but that doesn’t mean Black Swan isn’t unsettling, creepy and hypnotic film-making.

Nina Sayers (Natalie Portman) is an obsessive member of the New York Ballet, focused on achieving perfection and lives a sheltered, barely adult life at home, dominated by her mother Erica (Barbara Hershey). With the forced retirement of company lead Beth McIntyre (Winona Ryder), Diagheliv-style director Thomas Leroy (Vincent Cassel) selects Nina to play the dual role lead of white and black swan in Swan Lake. Leroy feels she is perfect for the innocent white swan, but needs to work on the sensual black swan. Increasingly feeling the pressure of playing the role under the demanding Leroy – and growing increasingly preoccupied with her understudy Lily (Mila Kunis) – Nina’s fragile psyche begins to fracture.

Black Swan is a mesmerising mixture of psychological drama, melodrama, Cronenberg-style body horror, unreliable narration and immersion into a pressure-cooker world. It’s often difficult to watch, sometimes maddeningly over-blown, and overly tricksy in its intense visual style. But despite that, it’s actually compellingly watchable, an audacious tight-rope walk between style and substance that constantly feels like it’s going to get lost in its extremes but never does.

Aronofsky’s camera flies and whirls like the ballet dancers he is recording, and he creates a wonderfully dark spin on The Red Shoes. What I found particularly fascinating watching the film again after many years is how unreliable and imprecise so much of the story is. Told completely from the perspective of Nina – a woman subject to delusions, chronic social insecurity and an increasingly split psyche – it becomes clear that a lot of what we see may not be as clear-cut as we think.

This most obviously affects our perception of Mila Kunis’ rival (or is she?) dancer Lily. How many of the interactions we see are actually happening, and how many are fantasies? With Lily becoming an alternative physical form for Nina’s projection of her own “black swan” persona (several times, Lily’s face morphs and shifts into Nina’s), we have to question virtually every appearance we see of her – and interpret her personality from the prejudiced, fearful view seen by Nina. Similarly, Barbara Hershey’s domineering mother (while undoubtedly controlling) is perhaps not the monster we see. She’s clearly 100% right in her fears for Nina’s sanity. How much of her behaviour is possessive jealousy and how much is it a protective parent who knows her daughter is a danger to herself?

Then of course we have Nina herself. Natalie Portman won every award going for her performance here, a tour de force of bravura dementedness mixed with vulnerability. Nina is a character who we only slowly realise as the film progresses is not the innocent, childlike waif she first appears, but has a much darker, more complex personality. Her “black swan” side – the darker, sexual side of her personality she is encouraged to explore – slowly expresses itself more and more as a physically. Portman clearly demonstrates the differences between the two sides of Nina’s personality. Her increasing desperation, isolation and insecurity are very effective – and the moments where she allows the “black swan” persona to control her actions are riveting.

Aronofsky explores Nina’s unbalanced mind with moments of pure body horror – although it’s grand guignol ickyness like this that probably pushed some people too far. It ties into most of the film being (quite possibly) a series of Nina’s vivid fantasies. Ballet wounds become increasingly magnified – from a broken toe nail early on, to Nina obsessively picking and scratching any wound. In one impossible to watch moment she obsessively picks off a long strip of skin from a finger wound (fortunately revealed immediately after to be fantasy). Beginning to believe she is growing wings, she obsessively scratches her back and has visions of swan flesh morphing over her body. At one point she fantasies her legs breaking into swan legs. In between this are bouts of sexual exploration – both solo and with partners – that seem increasingly unnerving.

Aronofsky’s ballet world is one of meticulous work and back-stabbing brutality. An early sequence covers Nina’s almost ritualistic preparations of her ballet shoes. The troupe, far from supportive, seems to be ripe for bitchy debate and rivalry (although of course some of this may well be Nina’s unhinged perception). Winona Ryder has a neat cameo as a former star dancer, ruthlessly dumped for being too old. Vincent Cassel’s director is at best a domineering bully and at worst a position-abusing horndog, depending on how reliable Nina’s perspective is. It’s the setting of a melodrama, and Aronofsky has expertly mixed a Silence of the Lambs style psycho-drama and The Fly style horror.

Portman holds the film together brilliantly under Aronofsky’s distinctive direction. It’s not going to be for everyone – but Aronofsky understands ballet if nothing else, shoots it brilliantly, and when we finally see Nina fully transformed as the Black Swan dancing the final performance, the energy and controlling focus of her performance, and its beauty, really comes across (even to a ballet ignoramus like me).

Black Swan is such an off-the-wall mix of styles, and so out there in some of its visuals, story developments and characterisations, that it’s not going to please everyone. In fact, catch this on the wrong day and you’ll hate this film (and probably really, really, really hate it). But catch it at the right time and it will stick with you. But whatever your view of its gothic style and content, you’ll admire Portman’s performance, respect the craft with which it has been made, and enjoy several fine performances from Cassel, Hershey and Kunis among others. It’s weird. Very weird. But that’s not necessarily a bad thing.
Email ThisBlogThis!Share to TwitterShare to FacebookShare to Pinterest
Labels: 2010, Barbara Hershey, Darren Aronofsky, Horror film, Mila Kunis, Natalie Portman, Psychological dramas, Sebastian Stan, Thrillers, Vincent Cassel, Winona Ryder