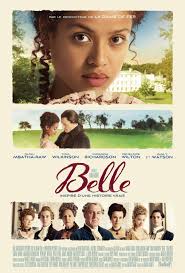 The British film industry produces a constant stream of costume dramas, many covering alarmingly similar ground on the aristocracy or wealthy of the Georgian period onwards. It’s to be commended then that Belle takes a similar plot, but from a radically different direction. Here, a famous real painting of a white and mixed-race pair of ladies becomes the jumping off point for a drama about an illegitimate mixed-race daughter of a wealthy family.

Dido Elizabeth Belle (Gugu Mbatha-Raw) is the daughter of naval captain and a slave in the West Indies. After his death, she his raised by her uncle William Murray (Tom Wilkinson), Earl of Mansfield, and his wife (Emily Watson) to raise her as their own alongside their niece Elizabeth (Sarah Gadron). Belle is treated as an equal among the family, but is not allowed to dine with guests or move freely in society. However, Belle has inherited a fortune from her father – unlike Elizabeth – and quickly finds herself a source of interest from the younger sons of the nobility. Meanwhile Lord Mansfield, the Chief Justice, is asked to rule on the slave ship Zorg case (where slavers threw their slaves overboard in a storm), a case that brings passionate abolitionist John Davinier (Sam Reid) into Belle’s life and makes her start to re-evaluate society’s attitude to her.

Belle is a formulaic costume drama, given an imaginative twist by placing a black woman at its heart. It explores issues around the imbalanced attitudes of British society at the time (and since), and the hypocrisy and racism that bubbles under the surface of the British gentry. Belle is rejected by all and sundry – until knowledge of her wealth becomes known, at which point many of these objections are choked back to secure her money. The film gets much mileage out of Belle slowly comparing her position first to the black servants around her and then to the slaves who lost their lives on the Zorg.

However, what undermines Belle is that it is a work of fiction – and it feels like it’s hiding it. What we do know about the real Belle (which isn’t much) doesn’t relate at all to what we see in the film. She wasn’t an heiress. She didn’t fall in love with an abolitionist lawyer – Davinier was not the aspiring son of a cleric, but a French steward. Elizabeth probably wasn’t a penniless relative. Mansfield’s credentials as a proto-Abolitionist and reformer were never in doubt – by the time of the Zorg case he had already passed a ruling 10 years earlier that there was no basis for slavery in British law. Belle actually lived in Mansfield’s house until his death as effectively a housekeeper and semi-secretary (the very fate she rejects in the film). The film’s lack of interest in historical fact even affects small details – at one point James Norton’s pleasant but empty Oliver boasts his father has purchased him a commission as a Captain in the Navy, virtually the only institution in Georgian England which promoted solely on merit! (This annoyed me a lot more than it should have.)

Belle is not a true story by a long stretch – but that doesn’t stop it proclaiming a “what happened next” series of captions at the end. It could have got away with this in a way other non-historical films have, if its story itself was more compelling. But instead Belle offers a merely serviceable story, offering a unique prospective on the aristocracy but largely using it to tell a fairly conventional “love across the social divide” story. Honestly, for large chunks of the film you could replace Belle with any slightly shameful second daughter, and the story would remain largely the same.

Which is a shame because it feels like it wastes something really interesting – and also wastes Mbatha-Raw’s star-making turn. She is excellent – sweet and naïve, but growing in confidence, determination and wisdom, gaining the strength of will to shape her own destiny. The film introduces interesting themes as Belle begins to question the attitudes of her family – do they accept her because they must? Would they be as open to a black stranger? – but these themes don’t quite coalesce into something really solid and coherent. Instead they are trotted out, but we don’t really feel we learn anything.

Similarly, the case of the slave ship Zorg seems rather loosely defined. We don’t get a real sense of public pressure or interest in the case, or really understand the essentials of what the case involved. Instead, it’s used primarily as a tool to question the attitudes of Lord Mansfield, and whether he has the ability to expand his obvious love for Belle into a wider statement of man’s equality. Tom Wilkinson is very good as Mansfield – prickly, but essentially decent and caring under a gruff surface – even if the role can hardly be a challenge for him. But the film doesn’t really manage to make a really compelling argument about what it is trying to say, other than slavery is of course bad.

Elsewhere, the film takes simple shots and shoots fish in the barrel. The Ashton family are introduced to stand in for British society. Lord Ashton is brisk and businesslike and interested only in maintaining the status quo. Lady Ashton – played by Miranda Richardson at her most coldly standoffish – only cares about securing wealth for sons. Of those sons, James Norton gets the most interesting part as the decent but shallow Oliver. Poor Tom Felton though: his character might as well be Draco Malfoy in period costume, all but spitting out ‘Mudblood’ at Belle. None of these performances offer anything different from what we’ve seen before.

That’s part of the problem with Belle – it wastes an interesting idea by slowly turning it into a more conventional story, primarily focused on who is Belle going to marry, rather than the implications of a black woman in a racist society, or the hypocrisy of that society being only willing to accept her when she has money. Despite some good acting – Penelope Wilton and Emily Watson also give tender performances – and a star-turn in the lead, it’s not really that interesting a film. You keep expecting it to burst into life, but it never does: for such a film offering a fresh perspective on history, you don’t feel like you’ve learned anything new about Georgian society at the end of it.
Email ThisBlogThis!Share to TwitterShare to FacebookShare to Pinterest
Labels: 2013, Alex Jennings, Amma Asante, British Films, Costume drama, Emily Watson, Gugu Mbatha-Raw, James Norton, Matthew Goode, Miranda Richardson, Penelope Wilton, Sam Reid, Sarah Gadon, Tom Felton, Tom Wilkinson