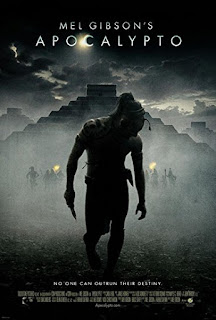 In the early 1500s, the Mayan civilisation is at its final peak before its collapse. However, it is a civilisation built on human sacrifice and exploitation. A peaceful village is brutally attacked by Mayan soldiers, who take the women to be sold into slavery and the men to be sacrificed to the sun. Jaguar Paw (Rudy Youngblood) manages to save his wife and child, but is captured and taken to the Mayan capital where he struggles to survive, escape and find his family.

Setting a film in the long gone Mayan civilisation, in an entirely dead language, with no stars is a brave choice for any film-maker. So you have to tip your hat to Mel Gibson, for all his undoubted unpleasantness, that he was brave enough (or powerful enough) to put the project together. It could have been a grand folly but, thanks largely to Gibson’s undoubted prowess as a film-maker, it’s a relentless experience movie, with moments of horror expertly mixed with terrifying edge-of-the-seat tension. It’s a clear sign that, for all his personal issues, Gibson is a very fine director.

The chase, when it comes in the final third is unrelenting, and brilliantly shot and edited. Gibson uses a range of different cameras, from those mounted on Youngblood, to tracking shots, to aerial shots to throw us into the middle of the action. Trees blur by, the soundtrack pounds, the camera doesn’t let up. Gibson also knows to throw in quieter moments – pause points, moments to take breath for both the pursuers and the pursued. Jaguar Paw carries a dreadful wound – and runs on the same level of adrenalin as the film provokes in its audience. 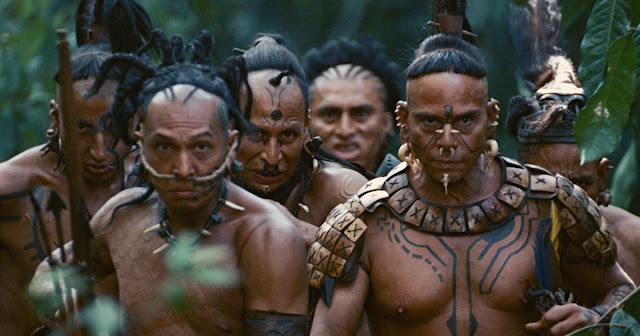 Of course, it’s also, as per a Gibson film, very bloody stuff. Faces are bludgeoned. Bodies are cut to pieces. A jaguar literally rips a man’s head apart. The film wants us to experience this bloody world first hand. As a piece of film-making, it’s addictive in its unremitting violence and tension. It’s also compelling how the odds slowly change throughout the chase – like a Die Hard in the jungle, the further the pursuit heads into the jungle, the greater confidence Jaguar Paw possesses, and the more he is able to turn the tables on his pursuers. This also highlights the savage danger of nature itself – the jungle is full of potential dangers, from jaguars to hornets to poisonous animals.

It’s far from perfect of course. The script is dire – the subtitled content we read if often terrible clunky. The opening sequence is a long series of jokes about eating a wild pig’s bollocks. There are strange anachronistic turns of phrase – at one point a collapsing tree nearly takes out the convey of slaves, leading Zero Wolf to shout “I’m walking here!”. If you were in any doubt about the essential crudeness and simplicity of Gibson’s sense of humour, you only really need to read the subtitles.

But because the film is subtitled and feels like a brave piece of film-making, it’s very easy to assign a depth to it that the film doesn’t really have. It is, to all intents and purposes, an 80s action film transposed to an ancient civilisation. It would like to think it has some profound message about the nature of man. But it’s largely an experience movie that throws you into an old civilisation and wants you to vicariously feel the suffering of its central character. It’s Gibson at his most visceral, throwing us into worlds of violence, tapping into elemental feelings of pity and horror. 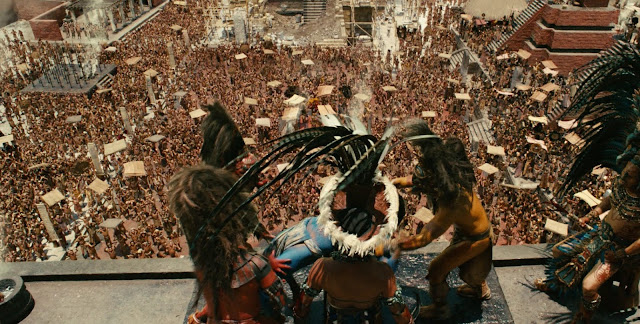 I guess there are themes in there about the universal corruption and cruelty of great civilisations, with their violence, greed and cruelty – and we know the conquistadors are just round the corner. But other than presenting this as is, the film doesn’t make too much of an effort to draw real contrasts with our world. It is what it is. The audience is there to feel the fear and the horror of the innocent villagers being fed to the Mayan human sacrifice machine. Any pretence to this being a profound movie on top of that is just that: a pretence.

But Gibson’s primary purpose here is to make a high-octane chase movie – an actioner, set in a primitive civilisation, where human beings on foot carry all the energy of the chases, and the stakes feel impossibly high. You have to admire Gibson’s power as an immersive film-maker, and the unique vision he presents, difficult as it can be to watch. It’s something truly unique, often shockingly so. And if it is, at heart, part chase part slasher with slightly more depth, it’s also something you can’t imagine many other directors having the chutzpah to put together.
Email ThisBlogThis!Share to TwitterShare to FacebookShare to Pinterest
Labels: 2006, Action Films, Chase films, Historical epics, Mel Gibson, Rudy Youngblood, Survivalist films, Thrillers