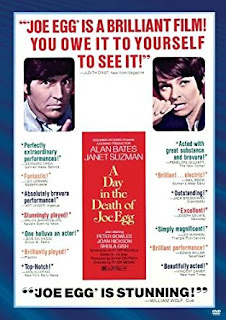 The playwright Peter Nichols’ daughter Abigail was born in 1960, suffering from severe physical and mental disabilities, requiring 24-hour care from her parents. Nichols transformed the experience into a play about two parents who struggle to care for their daughter, and spin out little fantasy conversations with their child, indulging in flights of fancy even while her father wonders if it is even worth carrying on with looking after a child who will never experience any improvement or independent life.

Alan Bates plays the husband Bri, a put-upon teacher at a boys’ school, prone to flights of comic fantasy. Bri feels increasingly frustrated about the unacknowledged strain their handicapped daughter Jo is placing on his marriage to Shelia (Janet Suzman), whose focus is almost exclusively on looking after their daughter. The couple use often surreal black humour to cope with the constant pressure of caring for the child.

The excellent Indicator blu-ray contains a fascinating interview with Peter Nichols, who clearly didn’t care for the film. He found it off-balance, too emotionally overwrought, too realist and essentially too depressing. He’s probably right. The play is a finely balanced mixture of near stand-up comedy and marital grief. Bri’s comic moments are vaudeville fantasy sequences, with funny accents and larger-than-life characters pulled together. This toying with the fourth-wall just can’t be translated in to cinema here, instead the film downplays the dark humour and humanity of the piece, and instead makes it a rather heavy-handed and glum watch.

Bates still has many of the essentially comic funny voices and character-based routines – there are sequences where he acts out the roles of various doctors and priests who have consulted on Jo in the past. But his performance is just a little too eccentric, a little too out-there, a little too twitchy – frankly it makes him hard to engage and empathise with. Maybe it’s the changing times that haven’t helped, but Bri’s constant whining that his sex life has been destroyed just doesn’t sound right.

Of course, Nichols is using this whining to touch upon the damage done by the pressure of constantly caring for a daughter who will never show any signs of improvement and never be capable of communicating with her parents. Nichols knows of what he speaks: he and his wife eventually hospitalised their daughter (and had two other children) – and he believes the parents should have done the same in his play. By making the entire focus of their life a child who is, essentially, an object (twice at opposite ends of the film she is pushed into a room slumped over a wheelchair), it’s clear the couple are causing no end of damage to their emotional lives. Maybe it's just heavier going as well because the film features a real child - while the play used theatrical invention to represent the child.

The film slightly unbalances itself by moving away from black humour to emotional impact. Maybe part of this is due to Janet Suzman’s astonishingly strong performance as Shelia, a part she invests with great layers of emotion and hope, constantly refusing to give up hope that one day Jo may respond. Suzman has one extremely emotional speech, recounting a moment where Jo pushed over some play blocks, which she delivers with a teary, earnest, simplicity to the camera which is profoundly moving. It probably makes Bates’ performance seem a little more irritating than it actually is, because she is strong.

And that is a problem with the film, because in order for it to work you need to bond with both parents. You need to share and be inspired by Shelia’s hope, while at the same time see that Bri’s more realistic perceptive, and his dark longings to end Jo’s life of suffering, are in many ways just as legitimate. The film is all about this issue of euthanasia – conversations dance around it constantly – and it largely manages not to fall either side of the issue. There are points on both sides – and the real issue is should the parents find some other way to get support and help with caring for their daughter? Instead you don’t quite bond with both parents the way you need too. You feel Bri is a bit too sharp, and that Shelia is a bit too unrealistic in what she believes in.

The second half of the film introduces most of the secondary characters, particular Freddie and Pam (expertly played by Freddie Bowles and Shelia Gish), giving us a fresh perspective on the events. Freddie is bluntly concerned in a jolly way with doing what he can to help and urges the couple to consider hospitalisation. Pam, however, behaves with the awkward embarrassment many of us are ashamed to admit we feel when confronted with the seriously paralysed. We also get to see more of Joan Hickson (the only cast member from the original stage production) as Bri’s brassy and difficult mother, whose attempts to help largely only serve to increase tensions.

It slowly becomes clear though that this is a film about the collapse of a marriage under pressure, even more than about caring for a disabled child. But shorn of much of its humour – the fantasy sequences don’t really work, because they feel a little too heightened and overplayed – the film turns the play into something really quite bleak. It’s frankly a little too depressing and overbearing to really enjoy. It has plenty of good performances, but doesn’t really open up the play and instead turns it into an intense, rather overbearing chamber piece. A film that loses its balance from the stage version, and instead becomes something quite glum, in which Bates’ Bri doesn’t really win our sympathy as you feel he should do. It’s a tougher watch than Nichols intended – surely why he wasn’t really happy with it.
Email ThisBlogThis!Share to TwitterShare to FacebookShare to Pinterest
Labels: 1971, Alan Bates, Janet Suzman, Joan Hickson, Murray Melvyn, Peter Bowles, Peter Medak, Peter Nichols, Play adaptation, Shelia Gish