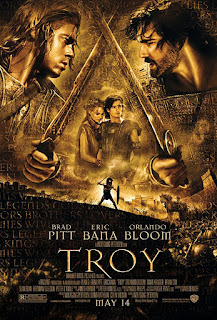 VERSION CONTROL: Some films are just vastly superior as Director’s Cuts. Troy is one. The longer cut of Troy, I can assure you, is a richer, deeper, more enjoyable film. So watch that one. I’m also spoiling The Illiad. For those who worry about such things.

When I was younger I loved the Greek myths. I had two or three books of them and I read them over and over again. I practically grew up knowing the whole story of the siege of Troy in intimate detail. This helped feed my love for sweeping epic films, with big casts, spectacle and themes. So it probably won’t surprise you to hear I love Troy. That I’ve seen it dozens of times. It’s the film I wish had existed when I was a kid, because I would have watched it again and again. I know it’s not perfect, but I can forgive it almost anything.

In Ancient Greece, a peace treaty has finally been agreed between Sparta’s King Menelaus (Brendan Gleeson) and Priam (Peter O’Toole) of Troy. Priam’s sons Hector (Eric Bana) and Paris (Orlando Bloom) are in Sparta to seal the treaty – only for Paris to fall in love with Menelaus’ unloved wife Helen (Diane Kruger). When they elope – despite Hector’s fears for the harm it will cause Troy’s people – Menelaus’ ambitious brother Agamemnon (Brian Cox) sees his chance to cement his hold over the last corner of the Mediterranean by conquering Troy. But to do so he’ll need the help of the greatest warrior in Greece, Achilles (Brad Pitt), who cares only for his legend and hates Agamemnon.

Directed with an old-fashioned grandeur by Wolfgang Petersen, mixed with an unflinching look at the blood and guts of war, Troy is a grand, cinematic epic that looks fantastic. The production and costume design are spot-on, and there is a great mixture of the “real” and the “special effect” in what you see on screen. It’s also got some cracking battle and fight choreography. The sword fight choreographers worked overtime on this one. The film embraces the grace and style of Achilles – he’s not the largest or strongest, but he has a pace, speed, intelligence and ruthlessness that allows him to duck, sway and constantly be one step ahead of his opponents. It doesn’t shy away from the brutality of his violence, and the camera never forgets the fallen. 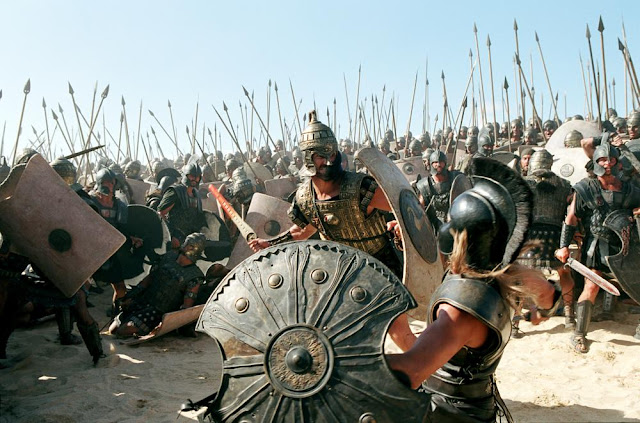 It’s a film that understands the impact of war. It makes us care about many of the characters – and frequently shocks us with senseless, sudden deaths, or devotes time to the grief of those they leave behind. Our hero Hector has an almost tortuous-to-watch lengthy build up to his final fight – and then the camera gives us a moment or two when he is fatally wounded to see the light start to go from his eyes before Achilles delivers the killer blow. It’s a film that moves the viewer, that excites us with action while letting us grieve the cost of war. 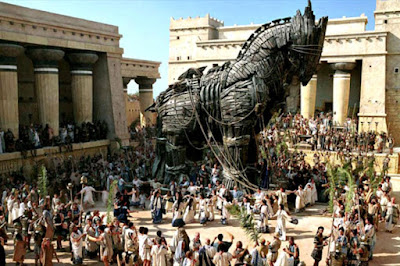 The script is also a reasonably decent adaptation of elements of Homer, remixed with a modern (God-free) twist – as if this was the “true” story legend has been spun from. The script is put together by Game of Thrones’ David Benioff, and has his recognisable mix of epic scope and noble principles, clashing with realpolitik.

So why was Troy rejected by so many people? Why was it so misunderstood on release? It’s a mis-sold and partly mis-cut story struggling to embrace its own implications. Maybe I’m reading stuff into it, but I feel like this is a different film than the marketing or filmmakers seem to have understood.

Firstly, Achilles is (at least for the first two thirds) effectively the film’s villain. He has no interest in people, only a sociopathic wish to be remembered as a great warrior. He’s ruthless in combat and slaughters indiscriminately. He’s temperamental and emotionally stunted. Contrast him with Eric Bana’s Hector: a devoted family man, who values the lives of the people of Troy first and foremost. Hector is effectively reimagined from the source material as a very modern man – the audience surrogate, the hero we can relate to, compared to the greedy, rapacious Greeks. 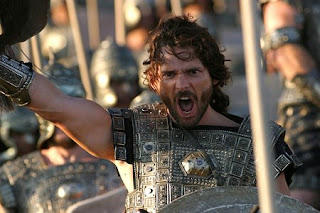 The struggle the film has is its biggest star plays Achilles – and it doesn’t want to compromise his box office appeal. So it tries not to draw too much attention to this contrast, and avoids passing too much judgement on Achilles. So we struggle when Achilles and Hector fight – anyone with any sense is surely rooting for the guy with a wife who just wants to see his kid grow up, rather than the sociopath, even if he is played by a super-star. All the characters hammer home our distress at Hector fighting Achilles, by the fact all of them reckon he’s got no chance. There are moving farewells for Hector with his father, wife and son. Hard to sympathise with Achilles when he slays the film’s most sympathetic character and drags him in the dirt right?

Achilles only starts to develop humanity (and become a modern hero) when he hits rock bottom after killing Hector – and is shamed first by Priam’s humbling, controlled pain (a tour-de-force from Peter O’Toole) then by his slowly developing love for Briseis. From this point , Achilles fights specifically to protect others – and finally puts aside his longing for immortal fame to try and save Briseis from the slaughter of the sack of Troy. The film’s slightly muddled unwillingness to condemn Achilles earlier, and its desire to celebrate him at the end, muddies the water. But there is a clear character arc slowly developing of Achilles becoming a humbler, more humane man.

As Achilles doesn’t look that good opposite Hector, the film turns Agamemnon into a ruthlessly ambitious, vain and greedy tyrant (played with a lip-smacking, roaringly enjoyable style by Brian Cox). Agamemnon (like many of the Greeks) is a modern politician – he wants to fashion the Greek city states into a single nation (sure one under his control, but it’s a more modern idea). The film, however, uses him to make Achilles desire for lasting fame feel more sympathetic. We all hate hypocritical politicians and cowardly bullies, right? And we all prefer the romance of the individual fighter uninterested in worldly affairs, right? Ergo, says the film, if we don’t like Achilles because we prefer Hector, we can also like Achilles a bit more if we don’t like Agamemnon. It’s clever structure in a way – but because the film doesn’t completely commit to it, it gets a bit lost in the telling.

The film’s attitude to Agamemnon is reflected in its favouring of Trojans over Greeks. While the Greek commanders squabble, or engage in political chicanery, the Trojans have an old school nobility. The film is enamoured with Priam. He’s played by Peter O’Toole in his grandest style (and O’Toole, though he can’t resist a bit of ham here and there, is very good). But Priam is in fact a naïve idiot, who makes a mess of everything. He’s incapable of accepting the realities of the world – his decisions lead to disaster at every turn. He may be overtly noble, honest and full of integrity – but like Ned Stark in Game of Thrones he’s completely out of his depth in Agamemnon’s ruthless world. Achilles may call him a “far better king”, but by any modern standard, Priam is in fact a terrible king, who makes all his decisions based on his regard for the Gods, rather than a claim appraisal of the situation. 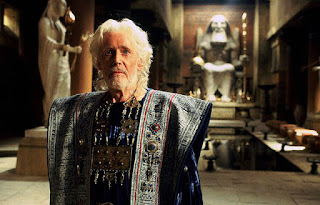 These two reasons are why the film struggles. The film despises the Greeks but wants us to love Achilles – while at the same time having him kill without compassion, including our main audience surrogate character. It wants us to aspire to the romantic ideals of Priam and the Trojans – even while it demonstrates time and again that these ideas are hopelessly misguided, and completely wrong. It goes part of the way to accepting these contradictions, but it can never quite bring itself to villainise Brad Pitt, or condemn the noble Peter O’Toole.

I like to watch it my own way, balancing these contradictions – and I think if you do that (like watching the TV show The Tudors if you accept what the show can’t: that Henry VIII is the villain) then the film is really rewarding, full of interesting ideas and packed with cracking scenes.

It also allows some wonderful performances. Brad Pitt is, I suppose, an odd choice for Achilles in many ways – and he seems a bit bound in by his 1950s-Hollywood-Epic-Transatlantic accent. But he really looks the part, and I don’t think he’s afraid to let Achilles look bad – and he sells his conversion into a more heroic figure. Eric Bana is terrific as Hector – warm, engaging, hugely admirable. He has a world-weary tiredness to him – while Pitt’s Achilles is as cold as marble, Bana’s Hector looks like he has the cares of the world on his shoulders, tired already of the violence and horror he has had to endure.

There are tonnes of excellent supporting performances. Sean Bean in particular is so good as the wry and infinitely wise Odysseus you will be wishing they had made an Odyssey sequel so you can see more of him. Cox and O’Toole are rather good (bless, they are clearly enjoying themselves) as flip sides of the same coin. Byrne is affecting as gentle Briseis. Brendan Gleeson makes a fiercely bullying Menelaus. I’m not sure Saffron Burrows has ever been better than here. James Cosmo and Nigel Terry shine in smaller roles. 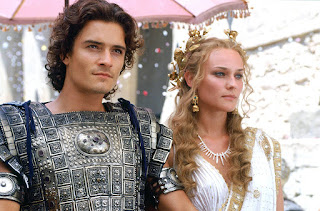 Poor Orlando Bloom struggles with a part that is hugely difficult – Paris is basically a spoilt coward. The film makes great play of Helen (a pretty good Diane Kruger in a near impossible part as the most beautiful woman, like, ever) being attracted to Paris precisely because he’s more of a romantic, and not interested in violence – but he tends to come across more as a thoughtless playboy, who lands everyone in trouble. It’s tricky for Bloom as this is the purpose of the film – and in many ways he’s very good casting for it – but that’s partly because he’s not the most persuasive of actors. He has a slight redemption arc – but I’m not sure Bloom as the presence to really sell it.

I can’t believe how much I’ve actually written about this– but, for all its faults and its confused structure  I actually rather deeply love it. Maybe it’s tied in too much with my love for Greek myths. Maybe I love these all-star character actor epics. But I think it’s a film that puts a lot at stake for its characters – and really makes you invest in them – and that draws some fine performances from its cast and frames them all in a brilliant vista. It’s crammed with some terrific scenes. It never fails to entertain me. It’s almost a go-to film. I’ve seen it dozens of times and yet it never tires for me. I love it. In many ways it’s one of my filmic (forgive me) Achilles’ heels.
Email ThisBlogThis!Share to TwitterShare to FacebookShare to Pinterest
Labels: 2004, Brad Pitt, Brendan Gleeson, Brian Cox, Diane Kruger, Eric Bana, Historical epics, Nigel Terry, Orlando Bloom, Peter O'Toole, Rose Byrne, Saffron Burrows, Sean Bean, Vincent Regan, Wolfgang Peterson