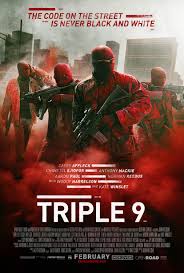 Triple 9 that never gets anywhere near fulfilling its potential. You look at the cast and you think “Wow! That has got to be one of the films of the year! Right?” Wrong. Triple 9 is another journey into the macho bullshit of the criminal underworld, where the “good” thieves have honour, the bad thieves are unscrupulous, the cops are all sorts of shades of grey, and the real baddies are foreign gangsters exploiting American criminals. All told with a backdrop of shouting, shooting and doping. You feel, and I suspect the filmmakers feel as well, that the film must be about something – but it really isn’t, it’s a super violent, dark Riffi with none of that classic’s touch.

Triple 9 isn’t particularly inventive or unique. The problem is it also isn’t very interesting. This is largely because you don’t engage with any of the characters. Atwood is a blank, played by a disengaged Chiwetel Ejiofor. He has a standard sub-plot of a son he isn’t allowed to see. But it’s not enough to get us caring about him. Chris Allen isn’t particularly likeable (Casey Affleck is not the most relatable of actors) so it’s hard to get worked up over whether he’s going to be killed or not. The most interesting character is Anthony Mackie’s Belmont – but he has been saddled with an “I feel growing guilt” sub-plot that you’ve seen dozens of times before.

Perhaps aware that a lot of the writing was paper-thin, the film recruits a number of familiar actors to “do their thing” so that we can shortcut to what sort of person the character is meant to be, by seeing crude drawings of their more famous, nuanced roles. Aaron Paul’s performance will be familiar to anyone who has seen Breaking Bad; Norman Reedus essentially reprises his role from The Walking Dead. Woody Harrelson does his grizzled half-genius, half-dope fiend, difficult man schtick he’s done many times. Only Kate Winslet is cast against her type – and her scenery-chewing enjoyment of the role makes her feel like an actress doing a guest turn, rather than a real person.

Hillcoat’s direction doesn’t bring any of the film’s threads together. It never feels like a film that is about something. Where is the depth, where is the interest? It’s not even a particularly exciting film to watch, with the heist moments not particularly exciting or interesting, and its shot with a wicked darkness that never gets the pulse going. After some initial build-up, the plot never really goes anywhere unexpected, and the final pay-off is stretching for a narrative weight it just doesn’t have.

Hillcoat and crew obviously feel they are making a higher genre film – but this is really just a pulp thriller, with actors acting tough but never convincing. None of the major events make a massive amount of sense: characters run into each other in a way that stretches credulity, the Russian mob runs its business with a counter-productive brutality, the dirty cops alternate between super cunning and horrendously dumb.  It’s a dumb, badly written movie that never comes to life. It doesn’t even have the real moments of excitement you need to at least grab you while the rest of the film drifts along. Not good. Not good at all. Triple 9? Not even triple stars.
Email ThisBlogThis!Share to TwitterShare to FacebookShare to Pinterest
Labels: 2016, Aaron Paul, Anthony Mackie, Casey Affleck, Chiwetel Ejiofor, Clifton Collins Jnr, Crime drama, Gal Gadot, John Hillcoat, Kate Winslet, Michael K Williams, Norman Reedus, Woody Harrelson