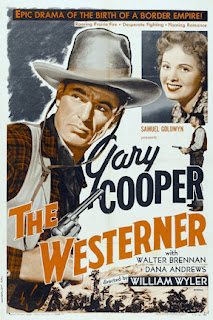 In 1882, Cole Harden (Gary Cooper) arrives in the town of Vinegaroon in Texas. The town is ruled by “Judge” Roy Bean (Walter Brennan), a corrupt, self-proclaimed justice of the land, who collects unfair fines and hands out “suspended sentences” (i.e. hangings). Nearly hanged, Harden escapes by peddling a story of his (fake) friendship with Lillie Langtry, the obsessive focus of Bean’s love. Over time the two men find themselves drawn to each other, forming a friendship – which is challenged by Bean’s favouring the violent cattle ranchers over the homesteaders.

The Westerner is a well-constructed, decent old-style Western that doesn’t do anything particularly radical – as if those making it needed a bit of downtime between more demanding projects, so put together something quite enjoyable to fill their time. It’s nominally a film about the clash between cowboys and homesteaders, but this plotline actually gets very little play – and is pretty unclear.

What it really is, is a sort of romance between Harden and Bean. They are two people surprisingly drawn together, who have a similar outlook on the world, and share a very natural and immediate bond. They have very real chemistry. In fact their chemistry is so strong there is barely room for anyone else to get a look in.

So the film is a sort of bromance tragedy, because of course it’s clear that they will end up on opposite sides. Because Bean has principles of control which Harden cannot allow to stand. Because the same instincts that lead Bean to champion the cowboys, are the same ones that lead Harden to champion the homesteaders. Both men think that they are basically in the right. The main difference between them is probably that, if push comes to shove, Bean would rather win than be right, while Harden is more concerned with meeting his moral standards than anything else.

Wyler brings all this together with professional crispness, shooting the action and more chamber-piece moments with skill. He draws a real playfulness from Brennan and Cooper – could many other directors have thought about including a scene where Cooper wakes up slightly confused in a bed with Brennan’s arm around him after a night of drinking? Confrontations throughout the film have a playful edge to them, even when guns are on the table. Even the final gun fight between the two has a reluctant edge to it, as if this was a game with a few more consequences than normal.

The bond between Bean and Harden is so strong, and so central to the film, that the relationship between Harden and Jane Ellen Mathews never quite clicks into gear. There is a charming scene where Cooper (with an honest flirtatiousness) cuts a lock of Jane Ellen’s hair – but the film isn’t really interested in this relationship. It feels like it exists for plot and scripting reasons – that the writers felt a romantic plot was needed, and wanted to give Harden a very clear personal motivation above and beyond his sense of justice. Doris Davenport is fine as Jane Ellen, but it’s not a performance you really remember.

Gary Cooper is rather good as Cole Harden, despite his reluctance to do the film. Cooper identified that Brennan had the best role and the best lines, and felt that he would actually be playing the support rather than the lead. Contractual obligation got him into the film. And it’s a good thing, as Cooper is actually very good. He has a light comedic touch which you don’t often associate with him, which he matches with his upright honesty and unflinching decency. But there is a playful grin behind his eyes throughout, and you get a real sense of his conflicting loyalties.

But Cooper was right – Judge Roy Bean is the part in this film, and Walter Brennan (who won his third supporting actor Oscar in five years for this) is quite simply terrific. His Bean is a wily, slightly crooked, maverick bully with a warped sense of personal justice – but he’s also a charming, rather sweet old man with a tough streak. The script gives a lot of focus to Bean’s obsessive love for the actress Lillie Langtry, which not only humanises him, but turns someone who we first see carrying out a ruthless judicial murder into some sort of teenage, love-struck rogue. That’s the genius here – Bean could be awful, but actually we (like Harden) end up loving him. Brennan’s effortlessly charismatic performance is central here – he is terrific in the role.

Take away these performances though and you probably only have flashes here and there of class alongside. Scenes are well constructed, and the entire film is very well filmed by the great Gregg Toland, but it’s very much a solid piece of professional work rather than a great classic. Brennan is brilliant and Cooper impressive, but not much more of the rest of the film really settles into the memory.
Email ThisBlogThis!Share to TwitterShare to FacebookShare to Pinterest
Labels: 1940, Dana Andrews, Fred Stone, Gary Cooper, Walter Brennan, Westerns, William Wyler