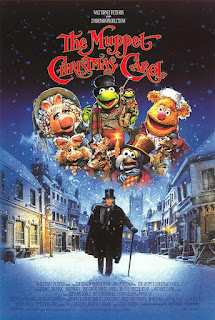 There have been many adaptations of Charles Dickens’ beloved novel. Surely few people would disagree – this is the best one. If you don’t love this film I’ll just say it – there is something wrong with you. That’s it. There is no hope for you. Just give up, pack up and go home. Because no Christmas is complete without this film. It’s brilliant.

It’s also perhaps the version that feels the closest to Dickens’ plot – which is remarkable considering 90% of the parts are played by puppets. But what they do so well here is bring the film back to the roots of the novel – it follows the plot pretty much spot on, the setting and design feel brilliantly Dickensian, and it even introduces Dickens as a character. And who better to play the great Victorian showman than the Great Gonzo? Gonzo anchors the film brilliantly, and is both really funny and delivers an awful lot of text from the original book. This actually feels more like a slice of Dickens than nearly any other adaptation you can think of – I’m sure he would have loved it.

That’s why the film works – it has a mix of brilliant muppet humour in it (and there are some really laugh out loud moments) but it’s also a pretty straight adaptation. There are moments where the fourth wall is leaned on, but the content is never mocked. So you get all the fun moments around the edges, but you still get an extremely strong story that has worked for over 100 years. Thank goodness they pulled away from the original idea of parody and played it straight with a smile!

One of the main reasons it works so well is Michael Caine’s superb performance in the lead role. When Caine agreed to do the movie, he was straightforward about his intentions: “I’m going to play this movie like I’m working with the Royal Shakespeare Company. I will never wink, I will never do anything Muppety. I am going to play Scrooge as if it is an utterly dramatic role and there are no puppets around me.” That is totally what he does. Because Caine walks the balance so well, he plays the moments of comedy with great humour, but also the emotional force of Scrooge’s journey.

Caine so totally believes in and respects the world he is working in, that he brings the entire audience with him. If Caine can, with a totally straight-face, treat talking to a small bunny singing carols with as much integrity as he does sharing a scene with Laurence Olivier, all the rest of us can as well. Just think how the film’s mood would have been wrecked if Caine had winked at the camera, or said something like “I told you to only blow the bloody doors off” – the careful balance of the film would have been wrecked in a moment. 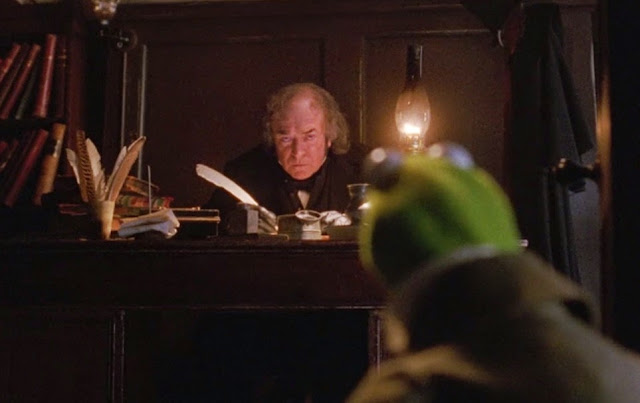 I think you can safely say this is one of Caine’s finest films: he’s got fantastic comic timing – his scowly ill-humour for the first third of the film is a delight – but he makes the later scenes genuinely moving. It almost seems like he inspires the muppets around him – Kermit and Miss Piggy’s later scenes dealing with the death of Tiny Tim are genuinely tear inducing (is this the only production of Christmas Carol where Tiny Tim isn’t insufferable?). The Muppets are all brilliant here (if Caine is going to treat them as real actors, I certainly am as well!).

That’s why the film works – it’s really emotionally moving. The muppets inspire a huge residual affection in everyone, and the film mines this brilliantly. So we get pleasure from seeing them – look there’s Fozzie Bear and Sam the Eagle! – and then feel their pain when they are sad. The film gets the balance just right on the muppets’ essential anarchy: at one point Sam the Eagle needs to be reminded that he is playing a Brit, Rizzo frequently forgets he’s playing a role, Animal seems unable to play the gentle music the script plays for at Fozziewig’s party… The film is crammed with small moments like this.

And it all works because it is held within a fine piece of straight storytelling – a faithful adaptation of Dickens, with a brilliant lead performance. It’s also very well made – inventively shot with a real sense of mood and atmosphere and brings memorable scene after memorable scene. There is barely a frame of the film where there isn’t something delightful, entertaining, thought-provoking or all three to spot. It carries emotional weight, it’s laugh-out-loud funny, you’ll fall in love with the characters. Caine sets the tone brilliantly, and raises the game of everyone involved – it’s an impossibly difficult acting task that no one in a muppet film has ever pulled off as well again. 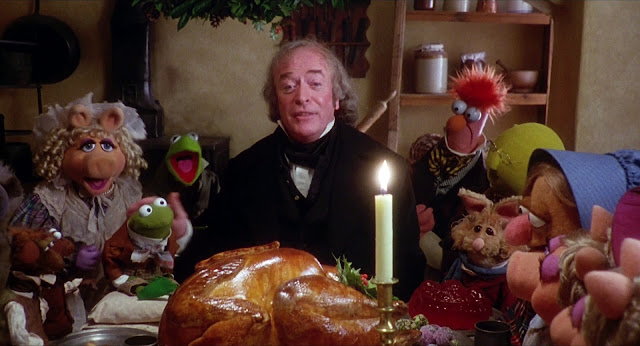 It’s one of the greatest Dickens adaptations, one of the sweetest comedies you’ll see, and one of the greatest Christmas movies ever made. On top of that it’s a brilliant musical, with some fantastic hummable songs (though the cutting of Love Is Gone from the DVD edition – too sad apparently –makes you sigh for Disney’s corporate soul). No Christmas would be complete without it. A must-watch classic.
Email ThisBlogThis!Share to TwitterShare to FacebookShare to Pinterest
Labels: 1992, Brian Henson, Charles Dickens, Christmas movies, Frank Oz, Literary adaptations, Michael Caine, Musicals, The Muppets