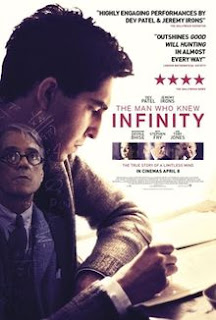 The British Empire. It’s a difficult slice of British history, and it undoubtedly contributed to contemporary attitudes of superiority that affected British people and their institutions. It’s these attitudes that form the central themes of The Man Who Knew Infinity, an effective story of a struggle against the odds.

In the early 1900s, Srinivasas Ramanujan (Dev Patel) works in Madras as a junior accountant – but his superiors quickly realise his mathematical abilities far outstrip his mundane tasks, and encourage him to write to mathematics professors to bring his theoretical work to their attention. Ramanujan starts a correspondence with GH Hardy (Jeremy Irons) of Trinity College, Cambridge, who invites him to England to explore his potential. Once there, Ramanujan quickly proves his genius but, despite Hardy’s support, he struggles to be accepted by the fellows and students of the college, who only see an upstart from the colonies.

The Man Who Knew Infinity is a conventionally structured biography – struggles personal and professional, success followed by setback and a final triumph combined with a bittersweet ending. It’s structurally nothing different from things you’ve seen before, but it’s told with calm, quiet, engrossing dedication, with unflashy direction, a solidly written script and some truly excellent acting. No wheel is reinvented, but it revolves with a highly enjoyable and heartfelt tenderness.

It’s a film that manages to present mathematics without using spurious real-world clunky metaphors, and gets a lovely feel for the hard work and theoretical study that go into mathematical theory. It also brilliantly communicates what the maths is about. I’m no theoretical mathematician (football stats are my limit) but even I could follow (just) why Ramanujan’s insights were so important and what they meant to the field of theoretical mathematics. The film has a real feel, not only for rhythms of academic work, but also the politics of academia (which needless to say are labyrinthine).

But the film’s main point is the resentment and outright racism Ramanujan must overcome. Played by Dev Patel with a quiet decency and modesty that only rarely bubbles over into bitterness, Ramanujan is constantly hit with everything from misunderstanding to contempt. His every achievement is met by questioning and doubt. His proofs must be demonstrated time and time again. To win the support and respect of his peers, he must constantly revise and revise his work, while the slightest slip is held up as proof his fraudulence or luck.

If you do want to criticise the presentation of this, you could say that much of the campaigning and struggle for acceptance is championed by the establishment figure of Hardy – it’s he who does most to convert others, and who presents Ramanujan’s key theories to the Royal Society at the end. Stressing Ramanujan’s politeness and humbleness does have the downside of making him a slight passenger at times in his own movie.

But then it’s not just his movie, because this is a story of a deep, near romantic, bond that forms between the gentle Ramanujan and the shy and sensitive Hardy. Hardy, the film implies, was a man uncomfortable with emotional closeness, but he feels a huge bond with Ramanujan, having overcome similar class-based prejudice. The two men have a natural understanding, and support each other, finding themselves in perfect sync in their opinions on mathematics and their outlooks on life. In the nature of the British, nothing is ever said – but it’s clear that both men feel an intense personal connection that, quite possibly in Hardy’s case, mixes with a suppressed romantic yearning. 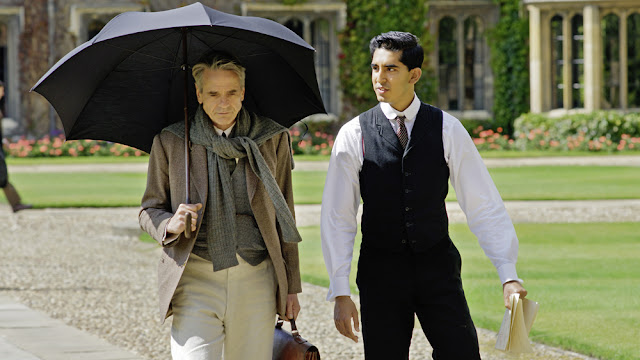 This relationship largely works so well because Jeremy Irons is quite simply fantastic as Hardy. Cast so often as superior types, here he gets to flex other parts of his arsenal as someone shy, timid, and sensitive. Hardy is so uncomfortable with personal friendships, he can rarely bring himself to look directly at other people. Irons sits on the edges of frames, or hunches and shrinks, his eyes permanently cast down. Saying that, he brings out the inner steel and determination in Hardy, his devotion as an advocate for Ramanujan. Irons is so shyly withdrawn, that the moments he allows emotional openness with Ramanujan, and most movingly with fellow mathematician Littlewood (played with a kindly good nature by Toby Jones), are wonderfully affecting. This might be one of Irons’ finest performances in his career.

The Man Who Knew Infinity is in many ways a conventional film, but performances like Irons’ lift it into something a little bit special. It’s a well-meaning and heartfelt film that embraces some fascinating concepts and also presents a story of triumph against adversity that feels genuinely moving and engaging. Filmically and narratively it’s very much by-numbers at times – but it hits those numbers so well, you’ll certainly have no complaints.
Email ThisBlogThis!Share to TwitterShare to FacebookShare to Pinterest
Labels: 2015, Academics films, Biography, British Films, Dev Patel, Devika Bhise, Jeremy Irons, Jeremy Northam, Kevin McNally, Matthew Brown, Padraic Delaney, Richard Johnson, Stephen Fry, Toby Jones