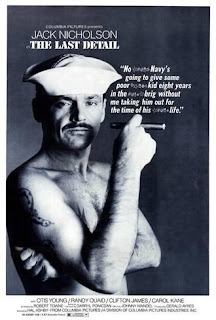 When you see Jack Nicholson in a film from his late period – basically the 90s onwards – it’s easy to wonder what all the fuss is about. It’s sometimes hard when you see him eating the scenery to remember that in the 1970s Nicholson did a run of such mighty, landmark performances that he basically earned the right to do what he wanted for the rest of his life. The Last Detail is an often overlooked classic from the 1970s – and Nicholson is simply outstanding in it.

Buddusky (Jack Nicholson) and Mulhall (Otis Young) are “lifers”, career sailors who are ordered to take a young sailor, Meadows (Randy Quaid), from Virginia to Portsmouth Naval Prison in Maine. Meadows will serve eight years for stealing $40. Given a week to make the journey, Buddusky and Mulhall at first plan to get Meadows there as soon as possible so they can have a leisurely return and spend their per diems on a blow-out. However, feeling sorry for Meadows’ harsh punishment and lack of life experience, they decide instead to take their time on the journey and show Meadows a good time – including drinking, whoring and general hi-jinks.

The Last Detail is a brilliant slice of 1970s filmmaking, an episodic road movie with a script to die for and a simply superb performance from Nicholson. Hal Ashby’s film is both a celebration of the rebellious attitudes of the 1970s and a sad acceptance of their failure. It’s a heartfelt film where we discover and understand more and more about each character and find out more about the age as well. It’s also a lovely story of bromance – of three men who come together, find themselves developing a very close bond, but are trapped by the rigid organisation they are part of.

The film is completely Nicholson. This is the sort of tour-de-force that cements him in any list of the greatest screen actors ever. It’s just a marvellous performance, near perfect. Buddusky is the ultimate impotent rebel, a man with a natural rough leadership quality over those at his level, but who basically lives within a societal prison that he can’t really imagine breaking free from. Buddusky will let rip – never better than the marvellous sequence where he erupts against a racist barman who also refuses to serve the underage Meadows (“I am the MOTHERFUCKING SHORE PATROL” he suddenly screams, after almost a minute of slow tension build-up) – but he’s also quiet and thoughtful. Watch Nicholson’s reaction shots when he listens to Meadows reminisce on his childhood dreams of being a vet. What a masterclass of quiet acting – Budduksy is enchanted, irritated, sad, bored, confused, moved – all at once and more.

Buddusky feels a brotherly affection for Meadows – perhaps also, a reflection of his own sense of being trapped. Nicholson alternates between affection and frustration with a touch of self-loathing. At one point during a drunken night at a motel, he demands Meadows punch him out, because he is the one taking him to prison. Meadows refuses – sweetly these guys are the best (only?) friends he’s ever had – Buddusky reacts by punching a cupboard repeatedly in fury. Later, during a fumbled sexual encounter for Meadows with a prostitute, he is kindly and understanding. It’s a fascinating performance of frustration, confusion and unaimed anger. There is nothing he can’t do. 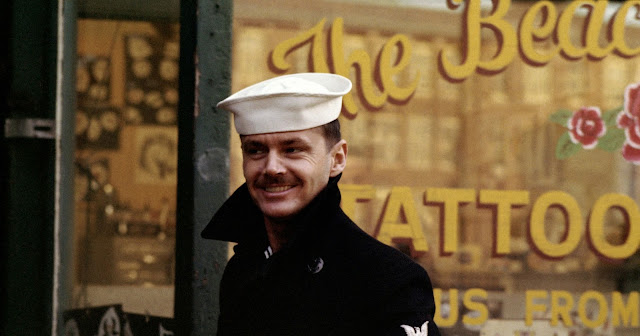 Young is excellent as Mulhall (there is a great sequence where Mulhall berates Buddusky for his risky attitude, revealing Mulhall’s basic conventional outlook), while Quaid’s Meadows is an endearingly innocent figure: a kleptomanic with no friends, a sad family background (a visit to his abandoned family home reveals his mother to be an alcoholic), a sad, lonely boy who (unwisely) looks to a prostitute for emotional connection, and holds an unfulfilled dream of becoming a Master Signalman. He still takes on the others’ confidence through – just watch how Meadows grows in assurance as the film goes on. All three of these actors spark off each other brilliantly.

Ashby’s camera drifts gently, allowing the actors a great deal of freedom. Ashby shot the film in chronological order which works brilliantly – not least in that you see Randy Quaid grow in confidence as an actor just as the character emerges from his shell. Scenes are allowed to loosely continue, often past the point you might expect, which really allows the actors to breathe and the characters to grow: scenes of the characters drinking (rather feebly) in a carpark (as they can’t get into a bar) feel organic and almost improvisational. Ashby uses a lot of dissolves and fades to mark the passage of time – often in the middle of conversations to move us from one point to another – which also work really well.

This works perfectly for Nicholson, as it allows us to learn more about Buddusky’s shallow rebellion. Buddusky may rail against the oppression of the navy but he’s totally reliant on the grounding it gives him. Mulhall is more open about this – as a black man, it has given him some standing and a steady income to support his mother – but Buddusky is adrift in the real world. Watch him flirting with a college girl at a party. He’s hopeless, falling back on how navy work is man’s work, repeating it several times like a mantra before a crude joke. Nicholson’s first introduction is him (hungover) telling a soldier where his superior officer can stick his summons. Next time we see him, he’s arrived to see that officer. Buddusky badmouths everything and boasts of being “a badass” all the time – but every time he’s with an officer Nicholson seems to shrink and clam up. He can rebel only in words, on his downtime. On the clock he just has to fit in with the rest.

Part of the visual genius of the casting is Young and Quaid are both over six feet, making Nicholson look smaller and stunted. It’s a really neat visual metaphor for his sense of rebellion. He and Mulhall may bitch and moan about the injustice of the navy – but there is never really any question that they won’t carry out the task they are doing. Neither man has any real aim or goal in life, nor any particular insight or any plan. They just want not to be told to do things they don’t want to do. Meadows is off to prison – but Mulhall and Buddusky are also “lifers”. They ain’t going nowhere. They might not always like it, but they’d rather do that than drop out – when they meet genuine counter-culture types, none of them can understand or relate to them at all.

But the film is not depressing – it’s actually rather moving and lovable – because the bromance between the men is so well drawn. They grow to care a great deal for each other. They may not always have much in common, but they clearly have a whale of a time in each other’s company. The laughter feels genuine and grows from the actors’ own obvious rapport – I’m pretty sure they are near corpsing a few times – and it’s infectious. There is a dream-like freedom to the film – for its duration, reality is suspended and they can be free. They’re like children allowed out of school for the day. It’s hugely, engrossingly enjoyable and moving.
The Last Detail is a simply brilliant film. Ashby is a partly forgotten film maker, but films like this have a quiet, unflashy poetry to them. Robert Towne’s script is perfect – foul-mouthed and barbed, but full of unexpected emotional depths and beautiful character beats. Young and Quaid are excellent – but oh man Nicholson. He is so good in this film, it has to be seen to be believed. He is a living, breathing force of nature – he burns up the screen, but it never feels like showmanship. He’s sublime – it might be his greatest ever performance. And this is a great film that, in demonstrating the weakness of the rebellious feelings of the 1970s, might just understand that era better than many other films. An overlooked masterpiece – you should make it your mission to seek it out.
Email ThisBlogThis!Share to TwitterShare to FacebookShare to Pinterest
Labels: 1973, Carol Kane, Clifton James, Hal Ashby, Jack Nicholson, Michael Moriarty, Nancy Allen, Otis Young, Randy Quaid