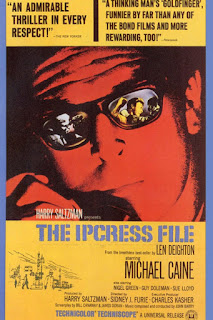 In the 1960s, the spy world was defined almost completely by the James Bond films. People had this idea of spies as glamorous, exciting people dealing with action and adventure in exotic locations. John Le Carré had started a counter-trend, but few alternative glances at the world of espionage landed with such skill as this adaptation of Len Deighton’s The Ipcress File.

Harry Palmer (Michael Caine) is a British agent in the secret service. Re-deployed to a section of the secret services headed up by Major Dalby (Nigel Green), he is tasked to investigate the disappearance of a number of leading scientists. But how does this link with mysterious Ipcress file?

The Ipcress File has dated very little – it’s still got a real sense of counter-culture cool, it’s engrossing and exciting, and it still makes comments that ring true about the lack of glamour in the world of espionage. It helps that it’s very well directed and designed, and that it has a star-making turn from Michael Caine (one of three he did in a row, with Zulu and Alfie). The Ipcress File looks and sounds great. It’s got an intriguing plot with twists and turns that still feel surprising and unexpected. It’s a great little spy thriller – and its deliberately small scale helps to keep it feeling fresh and inventive.

The British secret services are low-tech and underfunded. The offices are bare. Dalby’s operation is run out of what seems to a recruitment office. Cars are kept pretty basic. When Palmer is offered a new role, his first question is about a pay rise (he will get an extra £100 per year). There are no gadgets or glamour. Agents are partly selected not for their special skills but for their level of dispensability. The missions they undertake are confused or murky. The division line between allies and enemies is often unclear. Jobs are often boring or of minimal value (or both) – they’re more filing and paperwork than guns and glory.

Harry Palmer is about as opposite to Bond as you can get. He’s insolent. He’s chippy. He’s got a wry sense of humour. He struggles to hide his contempt for the toffs running the secret services. He’s a sergeant from the ranks. But he’s also cultured, well-read, intelligent and charming. He’s a great chef (surely the first film hero who cooks a detailed meal on screen – the shots of the hands were Len Deighton’s by the way). He cracks gags (more for his own amusement), often with a deadpan delivery. He has an eye for the ladies, but is hardly a Bond-style player. He’s a man of depth, who buys decent food, appreciates music and theatre, and carries a slightly bitter counter-culture grin just behind his eyes. He’s probably also the only film hero you’ll see shopping in a supermarket.

Michael Caine is perfect for this role (he went on to play it four more times). It’s a star-making role because he just drips charisma off the screen, while actually often doing very little. He underplays the role extremely effectively, using his natural calm and minimalism in front of the camera. It’s probably hard to appreciate how different it was at the time to see a man with a cockney accent play a lead role in a movie like this – other British film stars at the time had cut-glass RP accents. But Caine has a cheeky, insolent vibe that made him seem like the sort of hero you could relate to – the guy who is just working here, who could probably do a better job of running the show, but will never get that chance. Caine is also stubborn and bloody-minded, a squaddie at heart with a screw-you attitude just below the surface. He fits the role perfectly – and Palmer’s insubordination and sense of not being given his due matches up perfectly with Caine’s own (well publicised) attitudes to his place in this country’s film industry (who can forget his chippy collection of a BAFTA fellowship?).

John Barry’s score has a moody sense of cool that really helps to establish the tone of the film – its humour, its wry bitterness and its mystery thriller status. It’s an endlessly hummable series of refrains that perfectly matches up with the film’s part Third Man, part adventure fable structure. Sidney J Furie’s direction is very sharp and off-kilter, and he shoots many of the scenes as if from the perspective of an observer – the camera is positioned behind objects, or shots take place through cars or phone booths. Objects slightly obscure parts of shots. It gives us a constant feeling of being under surveillance. It increases the sense of tension and paranoia. And it makes the film look really distinctive.

If the film has a major flaw, it’s that its actual plot isn’t that strong. The reveal of the villain is made rather suddenly (and to be totally honest doesn’t really make a lot of sense). The plot line around the kidnap of the scientists is pretty unclear in both its intentions and the threat it poses to the country. The final sequence of Palmer captured and interrogated is a little underwhelming. The overall narrative never quite coalesces into something really compelling. But it somehow doesn’t quite matter, because the film is really a character study around a very cool leading character.

And it’s Caine himself who ends up carrying the movie. He’s a very different type of character. “What is he, some sort of fag?” producer Harry Saltzman apparently asked when he saw the sequence where Palmer gently cooks a proper meal for a potential girlfriend. Perhaps Palmer’s gently eyeing up of a number of women was added to counterbalance the fact that Caine plays him in this sequence as someone genuinely trying to form an emotional relationship. There are beats throughout of him as more Bond-style hero (he wakes up in his flat, and pulls a gun from the bedsheets, a visual slightly countered by the fact we’ve watched him make coffee and flick through the racing news). But really he’s a competent but slightly resentful professional, who knows he has hit a class-based glass ceiling.

The Ipcress File is a terrific movie, that looks unique and has a great soundtrack. It feels like a film that changed how heroes were perceived in British cinema – for all that films like Saturday Night and Sunday Morning had placed working class men at the centre of pictures, The Ipcress File not only made one a hero of a spy thriller, but did so while making him insubordinate and chippy rather than openly rebellious. Caine is quite superb in the lead role, and he never looked back after this – while Harry Palmer is surely a character who deserves some sort of place in a list of great film spies.
Email ThisBlogThis!Share to TwitterShare to FacebookShare to Pinterest
Labels: 1965, British Films, Gordon Jackson, Guy Doleman, Michael Caine, Nigel Green, Sidney J Furie, Spy thrillers, Sue Lloyd