The Hobbit: An Unexpected Journey (2012) 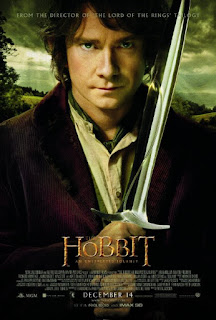 The little-loved Hobbit films are finished now. This may be a controversial statement, but looking back at the three films now, An Unexpected Journey is clearly the best of an average bunch, the only one that feels like it has some sort of story arc, where the padding isn’t too overbearing and we get some character moments. Despite all that, it’s (bless) a bit of a mess. A tragic missed opportunity, which are like bloated windy farts that follow through.

So. It’s three films. We all know it shouldn’t be. We all know it’s a slight kids’ book. So let’s take it as read that even this, the best of the bunch, is an over-extended three hour expansion of six chapters (six bloody chapters!) of the original kids’ fable. Never, at any point, does this feel like it needs to be a long film. Where is the depth and passion in this film? It’s a slow, slow, quick, quick, slow paced splat, which takes ages and ages and ages to get going and then runs through as many set-piece action scenes as possible.

Why did Peter Jackson make these films? Honestly, watching it you feel he had a gun to his head. He can’t bring any love or depth of feeling to huge chunks of the film. The action scenes feel put together by a choreographer and designed to be as loud and broad as possible, rather than because they are being put together by a storyteller.

Thirteen dwarves? This is one of the main reasons Jackson was worried about making this film. How could he make these characters distinctive? How could he build plot arcs and storylines for each one? The answer was he couldn’t. So he didn’t even bother. Now I know the Tolkien fans would have hit the roof, but for goodness’ sake would it not have been better for the good of the film to cut the number of dwarves down? So we could get to know them a bit? Because large numbers of these dwarves are indistinguishable from the other. Throughout the course of this film, as a stand-alone viewing experience, only Thorin and Balin stand out in any way as immediately recognisable. They are the only two who you can always identify. The rest? They just all mash into one. They don’t even really have distinctive moments. They are just a mass. 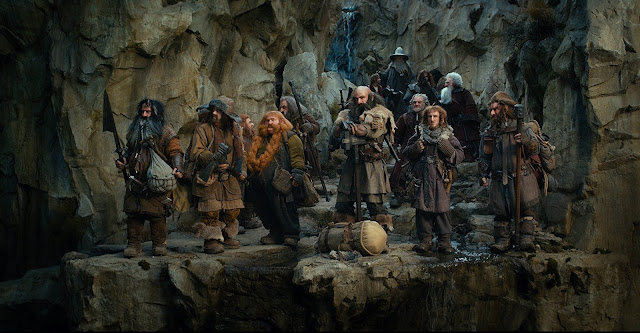 So you watch the overblown, overextended and yawn-worthy action and chase scenes and you just can’t get wrapped up in them. Because all we are doing is watching huge, time-consuming sequences with a mass of characters we can’t tell about, and even when we do, we don’t have any emotional connection to them. The dwarves are all sort of refugees I guess, which gives us some sort of link to them, but it’s the same back story for each one. It’s indistinctive and unclear. If Jackson had gone with his gut and cut some of these out, then the extended running time could have been used to build establishing character moments, to give pay-offs and plot arcs for them. Instead, he kept them all – and never develops any of them.

Those action scenes do go on forever. I know they all come from the book, I get it, but there is no tension in any of them. Dwarves bounce, twirl and fly all over the place. Never at any point do they really feel like they are in danger. A run over the field from some wolves – yawn. The chase sequence through the Goblin kingdom in a mine – double yawn. The second is particularly bad as it brings back strong memories of the LOTR sequence in the Mines of Moria, which had a hundred times the excitement and thrills of this.

In fact that reminiscence is a big problem for a large chunk of the film. The Hobbit is a kids’ book, but The Lord of the Rings is an adult fantasy novel. The attempt to tie these two different tones and genres of novel is a constant hiccup. So we get the dwarves pratting around and bouncing about, in moments that seem childish and cheap. And then we get doom-laden conversations, and dark over-blown musings about the stakes of the world – stakes that don’t tie in, in any way, with the content of the action, adventure story we are seeing in the film. Then there are blatant, clumsy references back to the original – did anyone else groan when Elijah Wood wandered onto the screen? Appearances from Blanchett, Weaving and Lee are all shoe-horned in. At least Ian Holm gets to do some lovely narration. But all these moments simply remind you that you could be watching a better film trilogy than this.

But despite all this, An Unexpected Journey isn’t all bad. Yes it hares about so quickly, with no depth at all, at great over blown length, but it has its moments and it is just about entertaining enough. Jackson can still do some of these moments well – the flashback that opens the film to Smaug’s attack on the mountain is very well done; in fact it has more inspired film-making and tension than nearly anything else that follows. Yes the arrival of the dwarves takes a lot longer to get going than the film needs – but at least it’s pretty charming, and Jackson’s whimsical love of Hobbiton is pretty clear. Shame I don’t think he brought any more invention or sense of charm to much of the rest.

It’s also helped by the fact there are some damn fine performances in there. Martin Freeman is just about perfect casting as Bilbo; he’s charming, vulnerable, slightly-out-of-his depth, brave, very English – he’s great. Ian McKellen practically is Gandalf by now, and he hasn’t lost his understanding of the character’s slightly grubby, grandfatherly charm. Richard Armitage as Thorin is brilliant, mixing a gruff, maverick quality alongside his pride and resolution – and his intense sense of loyalty. Of the rest of the cast, not many get a look-in, being either cameos or underdeveloped, but Ken Stott stands out as the kindly, wise Balin.

The film is also possibly the only one of the three that truly stands alone in some way. It has some form of plot arc behind it in the relationship between Thorin and Bilbo, and the lack of trust Thorin has for Bilbo, his unwillingness to accept him into the group. Similarly, Bilbo has to learn to embrace his role with the dwarves and his place in the company. This is actually a pretty touching and carefully done dynamic, that culminates not only in the film’s most involving (and tellingly low-key) action sequence, but also a tender moment of acceptance from the previously stand-offish Thorin (brilliantly sold by Armitage).

This is a great plot arc. It also has a negative impact on the next two films – because this is the emotional climax in many ways of the trilogy – and it came in the first film of three! With this major emotional plot line between two of our core characters resolved by the end of the first third of the sequence, what is there to do with the rest of it? It’s a major loss for the rest of the trilogy.

But for this stand-alone film it works well. Because it reminds you there is some heart in this film – heart missing from the next two films – because it is founded on an understandable emotional bond. The rest of the company may be indistinguishable, but at least Thorin and Bilbo move us. The best moments in these films are founded on feeling and character investment. Andy Serkis makes a great return as Gollum in an entertaining exchange with Freeman. The clash between Thorin and Azog is the most engrossing in the film because it has a genuine history to it established in the film, that a zillion clashes with the Goblin King, or a pack of wolves or faceless goblins never do.

The Hobbit: An Unexpected Journey is a decent movie. It has flashes of excellence in it. It’s got some good performances. Peter Jackson is still able to shoot a decent scene, even if you don’t really feel his heart is completely in it. The performances are uniformly good, and some are excellent. But the whole thing feels like an overblown missed opportunity. There was a chance to do something magic here with this Hobbit series. But this wasn’t it. You can’t cast the same trick twice.
Email ThisBlogThis!Share to TwitterShare to FacebookShare to Pinterest
Labels: 2012, Aidan Turner, Cate Blanchett, Christopher Lee, Hugo Weaving, Ian Holm, Ian McKellen, James Nesbitt, Ken Stott, Literary adaptations, Martin Freeman, Peter Jackson, Richard Armitage, The Hobbit