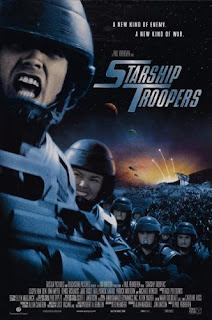 Every so often, a film uses the tropes of bad films so well, and makes such effective satirical digs, that people initially miss the point of what the film is trying to do. This is pretty much what happened with Paul Verhoeven’s Starship Troopers. On the surface a terribly acted, deeply stupid sci-fi actioner about soldiers killing space bugs, Verhoeven actually created a sharply intelligent, wry satire on the very bombastic militaristic fascism it seems to celebrate. This satirical bent was missed not only by the critics, but also the producers of the straight-to-video sequels the film spawned.

In the 23rd century, mankind has reached the stars. But it’s done so by creating a militaristic, aggressive society, where the young are encouraged to join up to the military in order to become “citizens”. Leaving high-school, hotshot would-be-pilot Carmen Ibanez (Denise Richards) joins up – followed by her boyfriend Johnny Rico (Casper van Dien), in turn followed by Dizzy Flores (Dina Mayer), the girl in love with him. Joining the ground soldiers, Ricco and Flores find themselves as the point of the spear in mankind’s war with the Arachnids (the Bugs), a race of (it becomes clear) intelligent and savage insects on a distant planet.

Starship Troopers isn’t really like anything else: it might well be Verhoeven’s American masterpiece, the perfect mix of his love for extreme gore, violence and sex (filmed with lashings of comic colour and playful glee) with keen social satire, the very ideas he had explored in everything from Robocop to Total Recall. At first glance, Starship Troopers serves up the all-action, gun-toting space battle excitement you would expect from its genre. But Verhoeven not only ramps everything up to 11, he also laces the dialogue and action with a keen satirical bent that hammers home the underlying theme of how war essentially (as Verhoeven puts it) “makes fascists of us all”.

The action is regularly interrupted by propaganda newsreel footage, which stresses the importance of sacrifice for the military effort. The military training camps are almost obsessively focused on brainwashing and reducing the young people in them to cogs in the machine, with safety and welfare as very much a secondary concern (the death of a recruit in an exercise is a concern only because it shows careless leadership rather than because of the death itself). Everyone in the film seems to be a perfect physical specimen. Military lives are thrown away through a combination of arrogance (they’re just bugs, this will be easy!) and incompetence, but never with any feeling of responsibility or expression of regret (though the media works hard to adjust all casualty figures wildly downwards).

The film fires shots at everything in the industro-military complex. The foreign policy of this world is ludicrously aggressive and jingoistic. Despite the spin of the propaganda, it’s pretty clear that humanity has started the war itself. The army is like Hitler’s wet dream – sleek perfect bodies, suicidal self-sacrifice, a complete lack of questioning of any orders or directives, a willing acceptance of corporal punishment. This attitude of violence and unthinking aggression is at every point of society – newsreel footage shows children holding guns with grinning soliders, who then proceed to hand out live ammunition. Later children are shown stomping cockroaches, to cries of the “the only good bug is a dead bug!”. Trials are routinely praised for the brevity (one day between arrest, conviction and execution!). It’s a terrifying world.

What Verhoeven does so well is that, while aware of the multi-leveled nastiness of the world of Starship Troopers, he also makes it a pretty effective straight-war movie. It’s exciting and the action quotient is high. Just like the soldiers in the picture, it’s very easy to see the bugs as faceless opponents which it is easy to feel little regret over killing. The battle scenes are high scale – and of course blackly comic in their extreme gore and bloodlust. But you can still enjoy the action – which is why the film works so well as satire. And also perhaps why so many at the time missed the point. Verhoeven makes this as an enjoyable B-movie, by really effectively using the tropes of B-movies. He turns the trashy B-movie into a sort of art exhibit.

That surely also explains some of the casting. I’m not sure how many of the actors are in on the joke. Certainly Casper van Dien and Denise Richards seem blissfully unaware of the satirical bent under the film. These two wooden actors trot through the sort of banal, by-the-numbers plot arcs and dialogue that fill films like these, with van Dien’s jaw as chiselled as granite and Richards grinning no matter the content of the scene. But their honest woodenness is perfect for the film: a smarter actor would have wanted to tip the wink to the audience, but these guys play it totally straight without even a hint that they are aware of the message underneath.

The more satirical element is left to other members of the cast: Michael Ironside has great fun as an almost absurdly fanatical solider, first introduced as a teacher lecturing his students on how the state must come before everything else and violence is the solution to all the world’s problems. Neil Patrick Harris tips a slight nod to the audience as a young man who rises so swiftly through the ranks that by the time we reach the end of the film, he’s a Gestapo-coated secretive colonel. He fits right into the grey militaristic, Nazi design of the military. You can watch all this stuff and simply enjoy the silliness – teenage boys will love this. And when they mature they’ll realise how awful the world it’s presenting is. 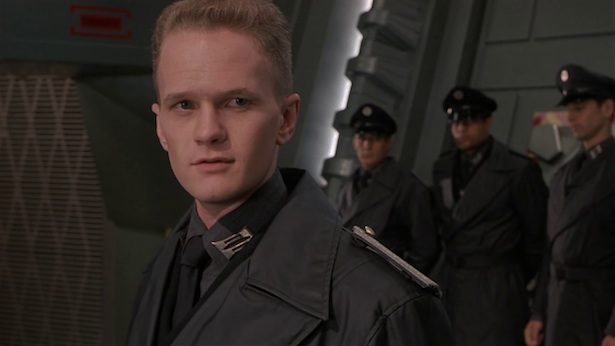 Starship Troopers is the ultimate military satire, a film that pushes every single fascist, militaristic society cliché to the limit. The news comes only from state propaganda. Military training involves brainwashing, maiming and slaughter. Education praises anger and violence as a solution to all problems. Verhoeven shoots this all with a grandeur, that pushes the celebration of militaristic violence to the max.

It’s a film which is brave enough to make its militaristic sequences exciting, to shoot and cut this fascist wet dream with a stirring sense of excitement underpinning all the action. At the end you can celebrate the small victory our heroes celebrate in what is clearly going to be an ongoing war – until of course you realise it’s the victory of a Nazi organisation. The fascist world of the future may bring us sexual and racial equality – but that’s because it’s worked out everyone is needed to feed the grinder. It’s a super-smart satire film that disguises itself as a completely trashy action flick. It’s actually rather brilliant.
Email ThisBlogThis!Share to TwitterShare to FacebookShare to Pinterest
Labels: 1997, Caspar Van Dien, Clancy Brown, Denise Richards, Michael Ironside, Neil Patrick Harris, Paul Verhoeven, Political satire, Science fiction, War film