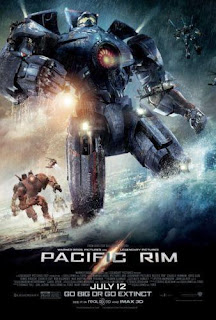 Film can be a beautiful and thought-provoking art-form. But sometimes, gosh darn it, you just want to leave the works of the great artists behind and watch a big, loud film in which giant robots hit giant monsters. Over and over again. In lurid, glorious, high colour detail. That’s pretty much the life and career of Guillermo del Toro. Make something like Pan’s Labyrinth. Then follow it up with something so wildly, tonally different you won’t believe it’s from the same guy: Pacific Rim.

In 2013, huge monsters (Kaiju) emerge from an interdimensional portal at the bottom of the Pacific Ocean. As they destroy cities left, right and centre, mankind is pushed to the limit. Eventually they develop Jaegers – giant robots controlled by two pilots, whose minds are linked together and used to drive the Jaeger’s movements. In 2020, Raleigh Becket (Charlie Hunnam) leaves the Jaeger force, commanded by General Stacker Pentecost (Idris Elba), after his brother and co-pilot is killed by a Kaiju. By 2025, the world governments decide to cut the funding of the Jaeger programme – forcing Pentecost to call Becket out of retirement and team him with his adopted daughter Mako Mori (Rinko Kikuchi) to launch a final, desperate, assault on the portal with the few remaining Jaegers, in an attempt to stop the ever-increasing number of Kaijus for good.

Pacific Rim is loud. It is silly. Its plot is a collection of clichés and offcuts from other movies. Some of the acting in it is ludicrously bad, over-the-top, poorly accented or all three. It looks and sounds like a direct-to-DVD movie made on a massive budget. Yet, despite all this, it’s really, really good fun. The ultimate guilty pleasure. Deafeningly dumb, but somehow it sort of knows this, and it knows you know it, so it just gives you what you wanted when you sat down – bangs, bashes and silly dialogue. Maybe this all works because Del Toro is actually a real director: he can shoot this nonsense with a sense of flair and scale, and is confident enough as a storyteller to just accept he’s making a dumb film and doesn’t need to try and pile some spurious depth on it, but just run with the emptiness.

Pacific Rim gives you this: some truly sublime robot vs. monsters battling in a variety of beautifully shot locations, in particular downtown Hong Kong. I mean, who wouldn’t love seeing this smashy super-action? The robots basically look really cool, the monsters are really imaginative, it’s tonnes of fun. Of course the battles are silly, there is always “one more weapon” to use that is bigger and better than anything they’ve used before (so why not do that from the start?). Del Toro also shoots the fights with a surprisingly calm camera, that makes the action the frantic lead, rather than the normal thing you see in these films, with the camera flying around all over the place. They’re edited really well. The score is great. The battles don’t overstay their welcome, and the characters at the centre of the Jaegers are always kept front-and-centre. Who wouldn’t love them?

The plotline of the film has a B-movie directness, which del Toro manages to fill with some depth. It’s a film about co-operation and learning to work together. This should be pretty wearingly obvious – okay it is – but somehow it strangely moving in the film. The Jaegers literally need two people to work together so closely they share a mind to operate it. The whole Jaeger programme only works from intimate co-operation. Characters feud and argue – but the film is about them learning to overcome these differences and work together. The film hammers home the fatality rate of this war with kaijus so well, that you end up really caring for sacrifices and risks these people are running. When Jaeger pilots start dying, I find it actually rather moving in its brutal suddenness.

At lot of this comes from the wonderful, hero-worshipping, film style del Toro uses. Look at shots such as when (in flashback) Idris Elba’s Penthouse climbs out of a Jaeger, framed by the sun behind him – he looks like some sort of ultimate hero. The Jaeger pilots all have their own distinctive themes, and are framed and shot with idealism and adoration. Sure their personal issues are the most rampant form of clichéd melodrama – but it’s sold with complete conviction, and told with such unabashed simplicity, that you end up caring for it. 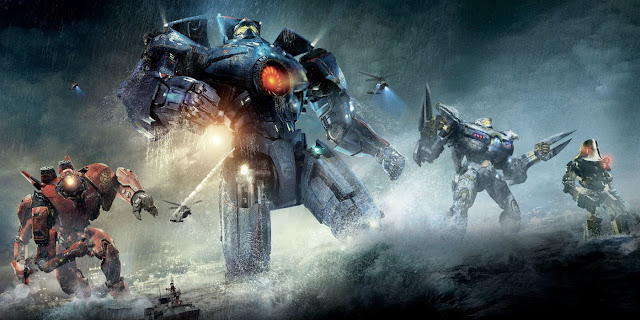 This is despite the fact that most of the acting is pretty below par. Idris Elba is the one major exception – the only one with the charisma to sell such basic plots as “dying of brain tumour” and to make chuckle worthy lines like “we are cancelling the apocalypse” sound like rallying cries, rather than seriously awful crap. Charlie Hunnam, by comparison, has nowhere near that level of charisma and Raleigh Becket is probably the most forgettable lead character you’re going to see in a movie like this. Robert Kazinsky is pretty awful as his rival Jaeger pilot (his accent is dreadful). Charlie Day and Burn Gorman are hit-and-miss as the comic sidekick scientists. Rinko Kikuchi is however pretty good – and with her “drift” memory loss she has probably the film’s most affecting sequence.

But this isn’t a film of subtle character work or sharp scripting. It’s got a B-Movie aesthetic, but it delivers it totally honestly. Basically, Guillermo del Toro is a good enough director to be comfortable with making a really, really good bad movie, Pacific Rim is deeply silly and stupid, but it is a lot of fun and its characters (despite their pretty forgettable or clichéd nature) are still people you really invest in. Del Toro pulls off a neat trick filming this, perhaps because the film is so sweetly honest, and unabashed, about what they are doing here. It’s got a heart-warming message about co-operation. It never feels exploitative. It’s got a childish sweetness about it, a real family robot basher. It’s the best bad movie you’ll ever see.
Email ThisBlogThis!Share to TwitterShare to FacebookShare to Pinterest
Labels: 2013, Action Films, Burn Gorman, Charlie Day, Charlie Hunnam, Clifton Collins Jnr, Diego Klattenhoff, Guillermo del Toro, Idris Elba, Max Martini, Rinko Kikuchi, Robert Kazinsky, Ron Perlman, Science fiction