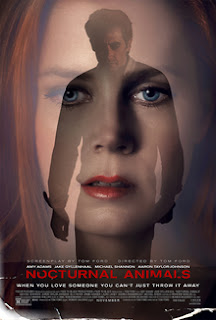 Susan Morrow (Amy Adams) is a society wife, running art galleries and married to an increasingly uninterested husband (Armie Hammer). One day she receives a copy of a manuscript from her ex-husband, Edward Sheffield (Jack Gyllenhaal). The book, while sensitive and from the heart, is also terrifying and visceral, and speaks to her in a way few things in her life have. It makes her begin to question her own choices. We see the story of the novel played out – Tony Hastings (Gyllenhaal again) and his wife (Isla Fisher) and daughter (Ellie Bamber) are waylaid late at night on an abandoned road by a violent local (Aaron Taylor-Johnson) – tragedy ensues.

It would be easy to say Nocturnal Animals is a stylish film that favours beauty over substance. But that would be untrue – Tom Ford has crafted a dynamically structured, intriguing puzzle, open to (and ripe for) discussion and reinterpretation over and over again. The film teases us with uncertainty and ambiguity, but it manages to avoid slipping into heavy-handed pretention. It leaves us with things unsaid, presenting parallel narratives and inviting us to mix and match them to create our own understanding. Ford’s skill is to not always present a definitive answer for how the book plot we are watching is meant to reflect on the plotline of the real world.

Ford is really good at distinguishing between the fiction and the reality. The world of Edward’s story is heightened in nearly every way, in a broad Western setting, while Morrow’s “real world” is cooler and contained, set in chilly apartment rooms or icy modern galleries or homes. The intercutting between the two is skilfully done, perfectly paced, never confusing or jarringly pulling us suddenly from one reality to another. The film avoids making obvious visual crossovers and links between the two (bar once – a moment that doesn’t really work), leaving the interpretation up to the viewer.

The story-within-a-story has a heightened tension, sometimes difficult to watch, not least in the road-rage incident that opens it. This sequence is almost unbearable in its whipper-cracker tension, with a threat of physical and sexual violence in every moment. The horror is almost palpable, sold a lot by Gyllenhaal’s struggles to control his panic and fear. Taylor-Johnson plays the demonic bully with an overblown operatic intensity, a hyper-real flamboyance that works well because it serves as a contrast with the grounded elements in the real story. It also adds to the sense of horror throughout this whole chilling sequence. Who hasn’t felt fear of being pulled over in a road in the middle of nowhere by terrifying, aggressive young men?

But all the elements of the story-within-a-story are cleverly balanced literary flourishes, carefully designed to appear just a little too close to “drama”, than those of the real world. Michael Shannon – a hard-boiled slice of charisma, he’s very good – is basically a stock character, repackaged with depth, but very much the sort of character you would find in a film rather than real life. Gyllenhaal’s Hastings similarly has the sort of moral conundrum and intense grief that feel that they belong more to a character from literary fiction than real life. The events of this story have a ferocious hyper-real intensity to them. Events in the story-within-a-story has a carefully constructed sense of dramatic irony.

By comparison, the “real world” is almost deliberately low-key and humdrum –minor affairs, and small but telling secrets, lives that are stuck in dull ruts or unimaginative cul-de-sacs. Amy Adams gives a complex and fascinating performance, much of which is essentially her reacting to things she is reading. It’s a performance that reeks of regret, of a woman unhappy in the choices she’s made, but too in love with the advantages they’ve brought to risk changing. She’s so set in the conventionality of life she seems unable to even imagine using her independence to break free.

The film teases us by misleading us about the parallels between the characters in the real world and those in the story. Ford playfully implies at first what we are watching may be partly true, and invites us to wonder what may be invention and what might have actually happened in real life. Alongside that, he also uses the double casting of Gyllenhaal to demonstrate the self-identification writers have for their characters. How much does Sheffield see himself in Hastings – and how much do the events that occur to Hastings, suggest a self-loathing in Sheffield? Again it’s all left to our own invention and imagination. We get flashbacks to past events in the real world that serve to both broaden our understanding and make us question our preconceptions.

The film builds towards a conclusion that is equally open. Despite its horrendous content in the story-within-a-story, there is a romantic longing in this film, a sense of a life not lived – and a hope for the future. The final sequence is completely open to interpretation – you could equally see it as hopeful (as Ford sees it) or bleak (as most audience members do) – I probably incline more to the latter, but that might just be me. Everyone though will think something a little different depending on what they see, and how they interpret it – the film doesn’t labour the points it makes or push you too far in any direction.

Nocturnal Animals is an intriguing experiment in form and content that works extremely well. It’s powered by some terrific performances and shot with grace and beauty by Ford. This is Ford really flexing his muscles as an artist of film, and he borrows liberally from Lynch to Hitchcock. Ford has a brilliant eye for composition and form and his editing is masterful. He gives his work a lyrical musicality, a sense of balance and rhythm – he’s also a fine, subtle writer and avoids the crudity of the showman. He’s a fine film maker, and Nocturnal Animals is an intriguing, at times hard to watch, but fascinating film that grabs hold of you and doesn’t let go.
Email ThisBlogThis!Share to TwitterShare to FacebookShare to Pinterest
Labels: 2016, Aaron Taylor-Johnson, Andrea Riseborough, Armie Hammer, Ellie Bamber, Isla Fisher, Jake Gyllenhaal, Laura Linney, Michael Shannon, Michael Sheen, Murder mystery, Thrillers, Tom Ford