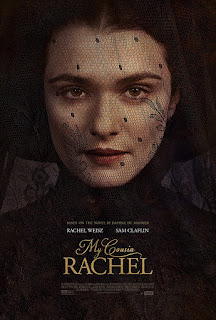 Did she? Didn’t she? That’s the key phrase this deliberately ambiguous film returns to again and again. Is Cousin Rachel a serial schemer, seductress and possible murderer? Or is she just – well I guess just really unlucky? It’s a difficult line to tread –ambiguity is extremely challenging to bring to film, as it’s a medium that’s pretty decisive in what it shows us first-hand. But My Cousin Rachel pulls this off with a creepy aplomb.

At some point in the 1830s, Philip Ashley (Sam Claflin) receives a letter from his cousin and guardian Ambrose, who has recently passed away in Italy. The letter obliquely accuses Ambrose’s wife, his cousin Rachel (Rachel Weisz), whom Philip has never met, of poisoning Ambrose. As Ambrose died before he could prepare a new will, Philip inherits his estate – but still harbours a rage against Rachel, suspecting her of murder. However, when Rachel comes to stay with him, Philip finds himself increasingly drawn towards, and besotted with, her.

Roger Michell gracefully directs and writes this intriguing little mood piece, a fine chamber-piece thriller. With an unsettlingly lyrical score and shot with a beautiful eye for the Cornish countryside, My Cousin Rachel not only grips, but rings true with anyone who has either (a) fallen blindly in love, (b) suffered from romantic obsession or (c) been paralysed with jealousy. Which is probably just about everyone.

The film relies for its success largely on Rachel Weisz’s exceptionally intelligent and thoughtful performance as Rachel. She looks perfect for the role – she’s both the sort of woman men would fall wildly in love with, and old enough to settle into an unsettling, semi-incestuous flirtation with Philip. Her performance works because Weisz plays the part with exceptional skill, never tipping the wink to the audience, but skilfully modulating and adjusting her performance with every scene so that you remain as uncertain about her actions and motives as anyone else.

Apparently Weisz made her own mind up on Rachel’s guilt and innocence, but never told Michell or Claflin. Intriguing to think that while they shot scenes of domesticity or passion, that only one of those involved really knows what’s happening – a mood that totally carries across to the viewer. Weisz plays the part with complete strength of conviction and straightness – every scene is played as if the feelings in it were completely true and bereft of manipulation. She makes it unreadable, while having a face overflowing with emotion and feeling. Does she understand Philips feelings early and manipulate him? Or does she genuinely not expect his romantic intentions?

Michell skilfully shows how Rachel wins over people with ease. Even the dogs immediately gravitate towards her. Parson Parscoe and his family flock around her. Philip’s servants smarten themselves up and make every effort to make a good impression on her. His godfather Nick seems to oscillate continually in his judgement of her, but even he seems powerless in her presence. The camera carefully hovers and focuses in on Rachel, with many shots focusing on her face alone – seducing us as much as the rest of the characters. We almost never see her except in scenes with Philip – so we have the same information as he does for making our minds up.

Sam Claflin is equally key to the film as Philip. In many ways Philip is quite the whiny teenager – you could easily dismiss him as a romantic young idiot, an obsessive would-be Romeo, who makes a series of terrible decisions through listening to his penis rather than his head. But despite that –/ perhaps because his errors and mistakes seem so universal – it’s easy to sympathise with him. Rather than want to slap him anger, you want to do so in frustration – “don’t do that, you idiot!” Michell and Claflin play his increasing disintegration brilliantly. Is it poison? Or is it his increasing jealousy and obsession unhinging him? Who hasn’t been involved in an unequal romantic obsession?

It’s not a perfect film. Philip’s obsession with Rachel is alarmingly sudden – perhaps too sudden. Towards the end, Michell becomes slightly too enamoured with mystery – a final, lingering shot introduces an element of uncertainty about a character we have never had cause to suspect, which feels like a little too much. At times the lingering camera seems to be trying to suggest more in the performance than Weisz seems willing to give away.

But these are quibbles. The film is well-directed and filmed, and terrifically acted – Glen and Grainger are very good in key supporting roles – but it’s a triumph for Rachel Weisz. Weisz seems like an actor it’s easy to overlook, maybe because she has never quite got the star vehicles her talent matches – but this film is a clear reminder that, at her best, she is an extremely gifted performer.
Email ThisBlogThis!Share to TwitterShare to FacebookShare to Pinterest
Labels: 2017, Daphne du Maurier, Holliday Grainger, Iain Glen, Literary adaptations, Pierfrancesco Favino, Rachel Weisz, Roger Michell, Sam Claflin, Simon Russell Beale